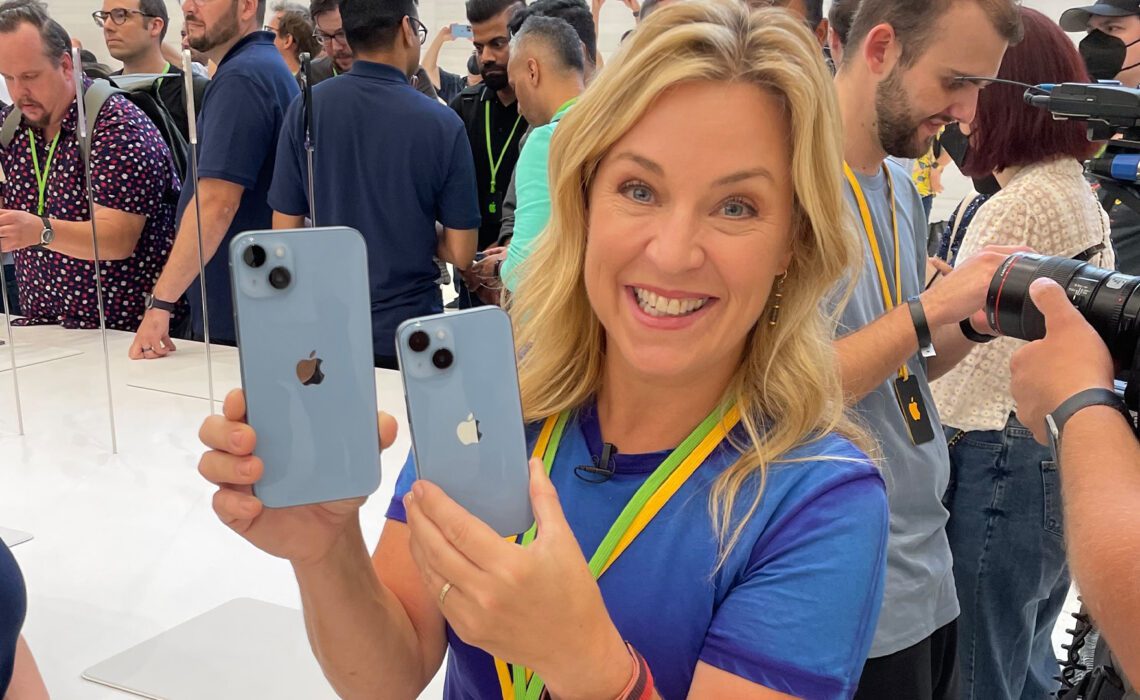 “Dynamic Island” is a term that could describe what it’s like to be at Apple Headquarters for the first in-person event since 2019. To attend, you had to have a negative COVID test, pass through airport-like security, and deal with a makeup-melting heat wave.

Still, the minute Tim Cook took the stage in the Steve Jobs Theater to announce the latest new round of Apple gadgets, it was like we finally had our “before COVID — lives back. And it felt good. Dynamic Island good.

Dynamic Island is the chuckle-inducing name Apple gave to the redesigned notch — or the shapeshifting “not” notch — that now sits at the top of the screen on the just-unveiled iPhone 14 Pro and Pro Max.

During the presentation, people groaned when Apple called it the “exciting new way to experience the iPhone.” But when I went hands-on with the new handsets, it was interesting to see in action.

The pill-shaped cutout takes up less screen real estate than the original notch and morphs into different shapes and sizes depending on what’s happening. The top cutout might appear like a little square box when you use Apple pay, then transform into a sideways rectangle for a phone call. It opens the top row of your iPhone screen for the first time ever really, and lets you do more without tapping apps. It’s interesting how it moves and changes in a dynamic way that makes sense with the other upgrades to this handset, too, such as the newer and smaller Face ID sensor.

It’s one of those upgrades that, very soon, we’ll wonder how we lived without it. Unless you still miss your home screen button. In that case, 2015 called and wants your phone back.

Here’s more from our first hands-on with Apple’s most drool-worthy mobile devices getting upgrades this fall.

After years of speculation, renders, and rumors, the iPhone 14 is finally here. Scratch that, four new iPhone 14s arrived today, starting with the 6.1-inch iPhone 14 and going up to the fully-loaded 6.7-inch iPhone 14 Pro Max.

The two iPhone 14 models are similar in shape and size to their predecessors. However, Apple doubled down on the notion that bigger is better — doing away with the mini handset and going all-in on the larger size.

These are the least expensive of the new handsets at $799 for the 14 and $899 for the 14 Plus. Most of the upgrades to these two models are inside — where it really counts.

The biggest news here is the addition of an SOS feature that uses satellites to send help your way — even if you’re outside of cell range. If you say, fall off a cliff, bump into a bear, or trip on a twig on some faraway trail — the phone will prompt you to point it in a specific direction so that it can communicate an SOS through a satellite orbiting the earth.

Safety was one of the main themes of the entire event, and this new feature was also added to the Apple Watch Series 8.

The cameras also got a decent boost here. The front-facing cameras capture much higher quality and sharper-looking selfies than my iPhone 12 Pro. It also added autofocus, which is a long time coming!

The iPhone 14 and 14 Plus still capture 12-megapixel images, but it’s added an additional zoom length — so now it’s wide and ultrawide — and the sensor behind the main camera is bigger than in the iPhone 13, with bigger pixels and an f/1.5 aperture. That means better photos in low light.

Apple says all of its new phones have the best battery life of any iPhone to date but didn’t say what that means. Hopefully, it’s significantly longer than my iPhone 12 Pro, which was dead by 1 PM today.

You’ll likely want the 14 Pro Max if you can afford it. Yes, it’s ginormous — even though it’s only 6.7 inches — the same as all of Apple’s other large-ish-sized phones — there’s a beefiness to it that makes it feel a bit more robust overall.

We already talked about the no-notch “Dynamic Island” feature coming to these two new Pro models, but that’s just the tip of the upsell iceberg. If you want the very latest and greatest, you’ll have to shell out at least $1,000 ($999) for the iPhone 14 Pro. The Pro Max starts at $1,099.

The new Pros have an “always-on” feature that shows widgets of the information you want and need the most without turning the phone on. You can check out the weather, calendar information, and more. It looks great, and wallpapers even darken to match the always-on mode.

What’s under the hood here is worth talking about too: These run on a new A16 Bionic chip featuring 16 billion transistors on a 4-nanometer process. Apple said the chip’s efficiency cores make it 40% faster at a third of the power consumption. The chip helps save battery life even with the always-on display.

It wouldn’t be a new iPhone without new cameras, though. For the first time, the iPhone is moving away from a 12-megapixel sensor to a 48-megapixel one that shoots in 8K. Improvements include advancements in low-light photography, all using a quad-pixel sensor with f/1.78 aperture and 24mm focal length.

There’s no way not to ooh and ahh over the camera package in these Pro models when you put them side-by-side with an older model.

The way Apple made it all look, there’s no real need for “old-fashioned” cameras anymore. Snag a $1,100 iPhone 14 Pro Max and become the next Martin Scorcese. Though as one reader commented on my Twitter feed, “they say this every year, but a year later, I’m still considering buying a mirrorless camera.” Still, it’s enough to out TikTok the next guy or gal for sure.

You can pre-order all four phones starting September 9th, and all but the iPhone 14 Plus will be available September 16th. The 14 Plus is available October 7th.