I’m not saying these are true … but the last several years we’ve pretty much been spot-on with what’s going to happen at the big Apple events before Tim Cook takes the stage.

Here’s a list of the big stuff that’s probably going down during Apple’s big reveal on Tuesday. 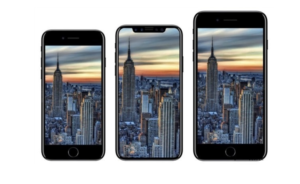 Over the weekend, a leak of the upcoming HomePod firmware was distributed for developers – either leaked maliciously or accidentally – we don’t know. It apparently including references to the iPhone X, the new $1,000 high end phone that will likely launch alongside two new versions of Apple’s current iPhone 7 and iPhone 7 Plus, renamed the iPhone 8 and iPhone 8 Plus.

Developers Steve Troughton-Smith and Guilherme Rambo spent the weekend digging through that alleged leak of the final build of iOS 11, which is the mobile operating system that’ll run the iPhone. 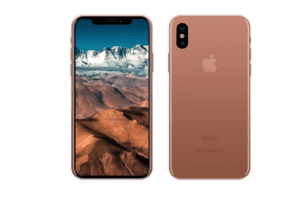 The top of the device is expected to have a cutout in the screen for the earpiece speaker, selfie camera and sensors, similar to that of Android-founder Andy Rubin’s Essential Phone. Apple is also expected to do away with the traditional home button on the front, replaced with a virtual home button and possibly a new gesture panel that will respond to swipes, taps and other gestures to navigate the interface. 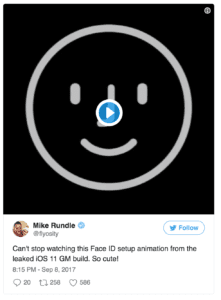 The next version of Apple’s iPhone allegedly features infrared-based facial recognition unlocking – eliminating need for a passcode or fingerprint.

Apple’s IR-based camera system is expected to create a 3D scan of a user’s face to recognize its unique shape.

Leaks also suggest the system will work at a wide range of angles. In addition to unlocking the phone, FACE ID is expected to be used for authenticating payments and unlocking security features.

Leaks also point to the phone being able to tell when a user is looking at it to automatically silence notifications. 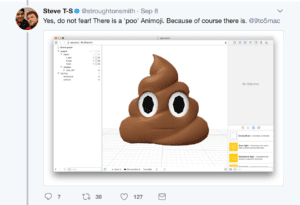 Alongside new hardware features, the iPhone X is also expected to introduce a new type of animated emoji, called Animoji. The 3D animated emoji can be created from face scans, and possibly your voice, to reflect facial expressions in animated characters including a monkey, robot, cat, dog, fox, rabbit, pig, chicken, panda, unicorn, alien, smiley poo and others.

Alleged camera upgrades include at least one 12-megapixel camera on the back, possibly two, and 7-megapixel selfie camera on the front. Also – augmented reality and further enhancement of its computation photography system, which combines the images from multiple cameras on the back into one photo. A new version of Apple’s Portrait mode with advanced lighting simulation is expected to be part of iOS 11, creating dSLR-like effects such as bokeh or shallow depth of focus. There’s also talk of an Infrared Camera and a “SmartCam” – though those are likely both features of the facial recognition tech and the new improved camera upgrades.

What else have you heard about the new phones and other hardware updates tomorrow. What do you most care about? Be sure to share with us via social media – and I’ll be reporting live from the event tomorrow.