HOW TO: Kick your smartphone addiction. It doesn’t even hurt. 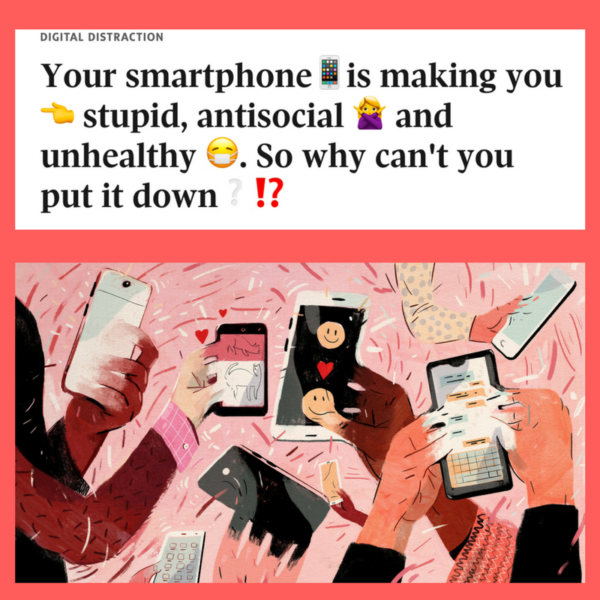 THIS STORY ORIGINALLY WAS ORIGINALLY PUBLISHED FOR USA Today AND USATODAY.COM:

My 16-year old daughter is infinitely better at all things tech than I am. Even disconnecting from it.

While I was on a work trip last week, she created a “no-phone zone.” When she comes home from track practice, she switches her phone into “do not disturb” mode, and sticks it in a drawer right by the front door. Out of sight, out of mind, for pretty much the entire school night from now on, she told me, and it’s already working wonders.

She said it’s helped her concentrate on her homework more, focus on what she needs to get done every night, and best of all, reclaimed more of her precious time. Now, could I do the same thing, she challenged?

I made it less than an hour. “I just have to grab my phone to look this one thing up,” I told my family when a question came up at the dinner table that night that none of us knew how to answer. But the minute I unlocked my screen and saw a notification from Instagram, (someone liked something I posted!) I was lost down the rabbit hole.

Recent research shows we’re all more sucked-in and tuned-out than ever — and it’s taking on toll on everything from our productivity at work, to our emotional and personal well-being at home. Before you say we all just need more willpower, consider this: Ex-employees of Google, Apple and Facebook are raising red flags about the very tech they created — and revealing how it’s engineered to grab your attention, keep you hooked, and make you crave more.

Earlier this month, two major investors holding about 2 billion of Apple stock, wrote a letter urging the company to address the growing problem of young people becoming addicted to iPhones. The letter states “78% of teens check their phones at least hourly and 50% report feeling ‘addicted’ to their phones.” And a new study published in the journal Emotion shows a correlation between teens’ happiness and how much they time they spend on phones. Bottomline: Up to one hour a day is fine — even better than no-time says the author — but more than two hours, and it all seems to go downhill. Fast.

What to do about it

I’m not proud to admit that my smartphone is often the last thing I touch at night and first thing I look at when I wake up in the morning. If you can relate, here are a handful of smart, cheap, and easy ways to reclaim personal space and create more healthy boundaries with your smartphone.

Set your phone to grayscale

Here’s one I first heard from former Google designer Tristan Harris — make your phone black and white. As Harris explained last June on HBO’s Real Time with Bill Maher, you can go into your phone’s settings and “take the color out of your screen” to switch off the way certain colors like red, greens, bright blues, and others can evoke certain emotions and “trigger [a] whole set of sensations and thoughts.”

(Slide the bar right or left here too see the difference: )

Android: While Android phones can vary, on the Samsung Galaxy S8 I have on hand, I went into Settings > Accessibility > Vision > Grayscale.

Not everyone can create a ‘no phone zone’ and stick with it the way my daughter has (cough…like me…cough cough). Still, it’s a free and easy option if you can do it. Turn on “Do Not Disturb” mode, and stick it in a drawer. Not being able to see it is key. If you’re worried someone might need you in an emergency, go into Do Not Disturb and choose Allow Calls From.

Who this is good for: Anyone who can tell their boss that they don’t work 24/7, and tell their friends and family that they’re having phone-free time. It also works best if you have someone (like your own teenager) to hold you accountable.

The kSafe locks up your smartphone and only opens once the timer expires. (Photo: kSafe)

Over the past few years, I’ve covered fairly inexpensive home safes that can lock your phone away from you for a set amount of time. The one I’ve used the most is the
kSafe ($50). Put your smartphone inside, turn a dial at the top to set the time you want it locked it away, press a button, and you can’t get to it until the time’s up.

The Yondr pouch is an even more high tech version of this. While it’s used for larger venues right now such as concerts, or at schools, there’s a chance we’ll see this sort of tech in our homes one of these days too. The way it works is you put your phone into the Yondr form-fitting pouch that locks when you shut it, and won’t unlock until you tap it on a little disk on the way out. The idea behind it is that if you really have to use your phone, you’ll do it outside, where it won’t disrupt anyone around you.

A screenshot of the app Thrive. (Photo: Thrive)

Ironically, there’s no shortage of apps to save us from our addiction to … apps. Samsung and media mogul turned wellness-guru Arianna Huffington just launched a free app called Thrive for anyone with the Galaxy Note 8 phone.

Download the app, choose an amount of time you need a break from your phone, and for that set time, anyone trying to reach you gets a notification that you’re “thriving” or whatever personalized message you add — and you get a still and silent phone.

Most smartphones have a combination of this with the Do Not Disturb and Drive Mode, but Thrive wraps into oneapp with added insights on how you use your phone. Even though it’s only out for Note 8 right now, anyone with an Android device can download a beta version from the Google Play Early Access section and try it out.

I also use an app called Moment to track how much time I spend on my phone, set daily limits on certain social media apps, and force myself off my device when all else fails.

Another one I’ve tried is the Freedom app to block access to certain apps and websites, and my new favorite is an app called Forest — which gamifies it all with humor and an environmental-twist.

Open the app, set a timer and put your phone down — face down — and don’t touch it until the time’s up. If you can make it, you grow and plant a tree in a virtual world, and a tree gets planted IRL too. If you blow it though, the app scolds you to “Go back to your work” or “Stop phubbing,” and then your fake tree dies. That’s a total bummer — and for some of us — enough incentive to leave our phones alone long enough to see that there’s an actual forest through the trees.