Worried your kids are addicted to screens? Help is here. 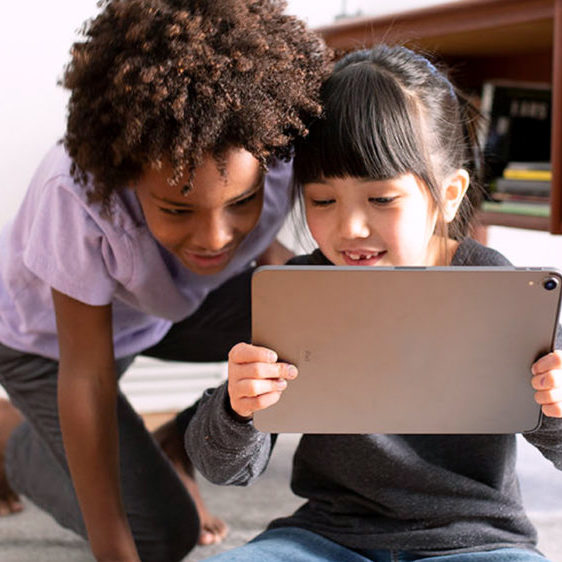 My daughter is off to college, yet I still have some of the same worries about her tech use as my friends with kids in middle school: Is she safe? Is she on social media too much? Does she put her smartphone down long enough to have meaningful connection and communication in real life? 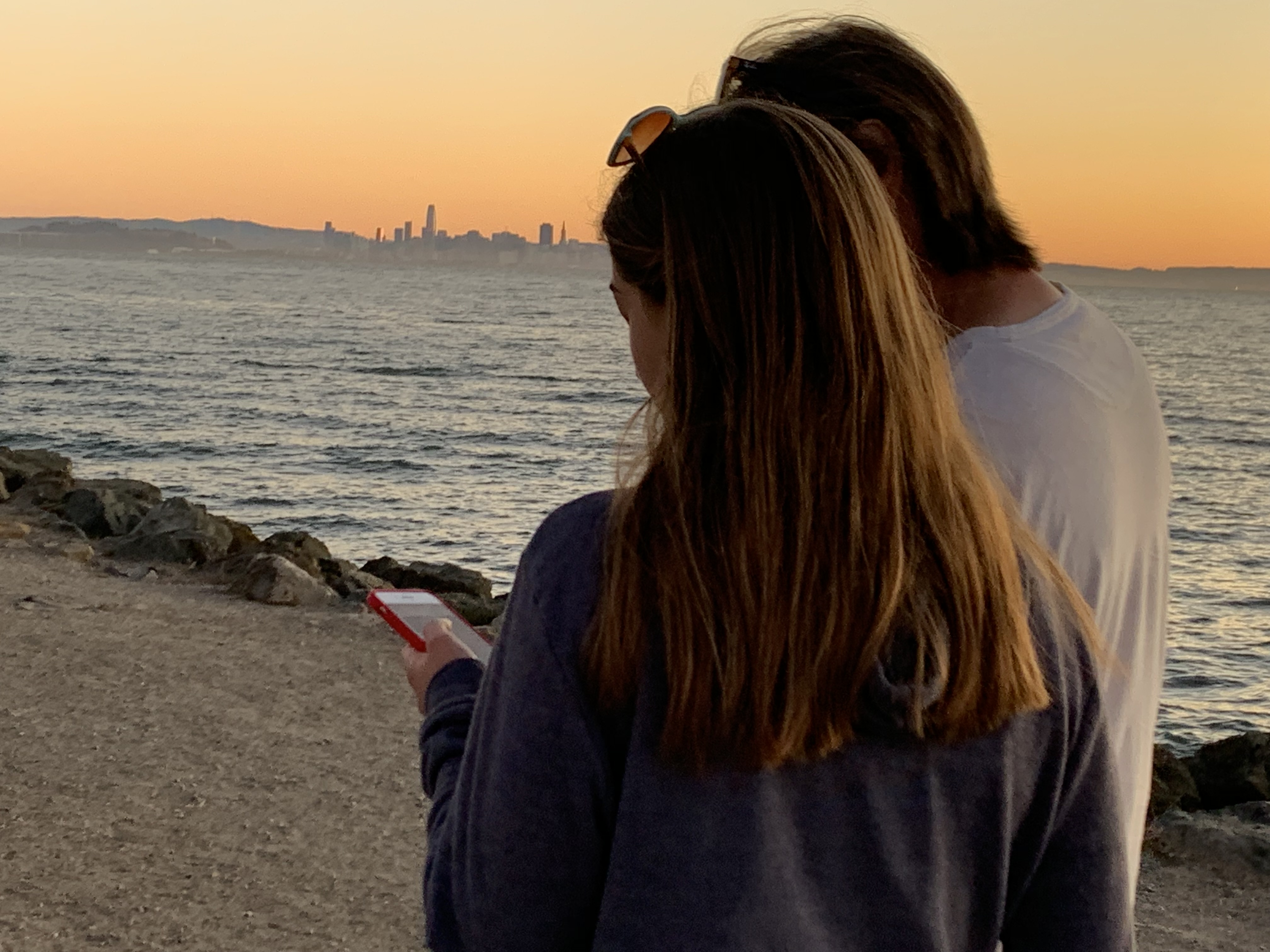 My 18-year old daughter shows my husband, her stepdad, how to set Screen Time limits on his new iPhone. She and I successfully navigated healthy screen time together.

Tech-centric worry is the new norm and makes up a lot of what we parents are talking about these days: Safety, screen-time, device distraction, and making sure our kids get the right balance of necessary tech tools — along with real-life skills — to succeed. How do we handle modern technology the “right” way, especially when so many of us are overwhelmed by it all ourselves? Most of us know we should do something, but what, exactly?

Those are the core questions I’ve spent the last several years trying to answer as I raise my own child in the midst of it all. From apps that monitor your child’s’ every online move to bulletproof binders, I’ve gone all-in with tons of tools that are supposed to help protect our children and ease our anxiety. Here’s a start to what I’ve found.

When it comes to getting sucked-in and tuned out, many teens now admit they have a problem, according to a report from the Pew Research Center. More than half of teens surveyed (54%) say they spend too much time on their cellphones, and roughly nine-in-ten teens think it’s a major problem facing their generation.

Two of the simplest tools for parents and teens are likely already on your phone: Apple’s Screen Time function and Google’s Family Link app for Android. They are free and let you set specific times of the day and night that your kids can’t use their phones — such as during homework or bedtime hours. You can also use Apple or Android built-in tools for laptops and tablets to limit their total time on social media or games, as well as block access to inappropriate content. 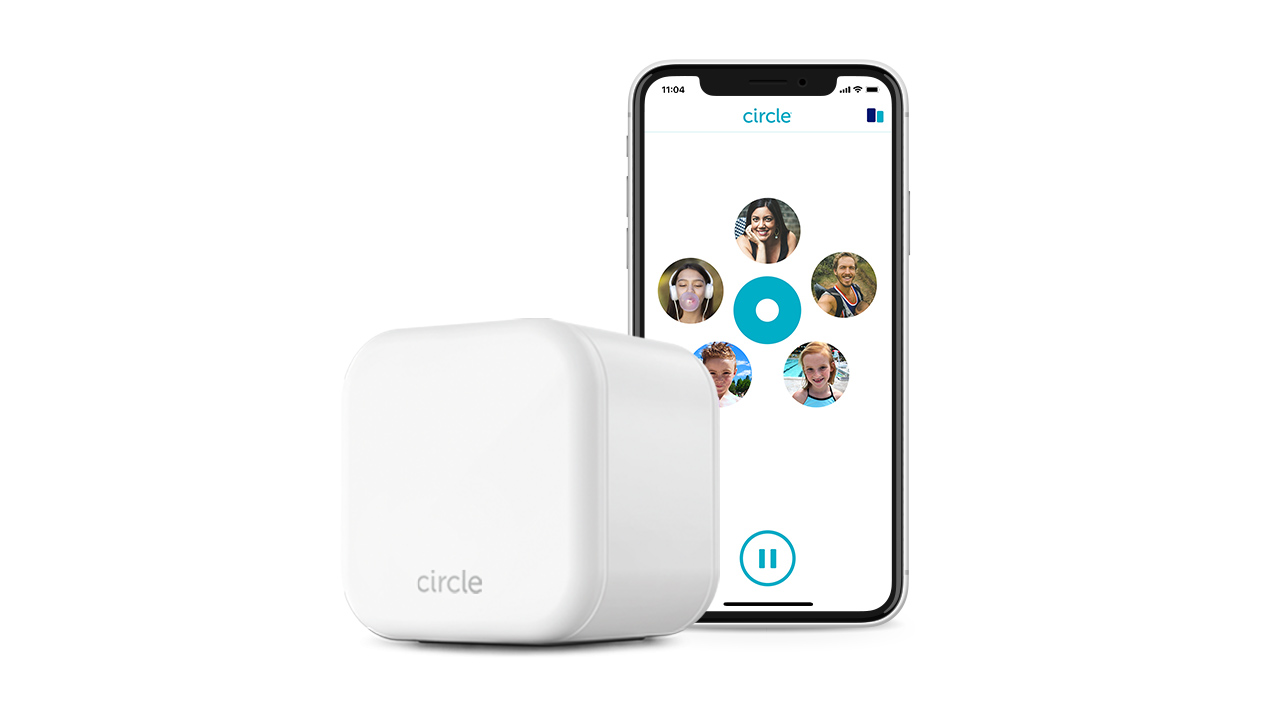 For a more robust management system, I’ve found the Circle Home Plus ($129) one of the easiest add-ons around. It lets parents set limits, block content, and keep track of what kids are doing online — inside the house or on the go. It works across all devices — laptops, tablets, smart TVs, video game consoles, cell phones, and smart assistants — and there aren’t any gaps in coverage when mobile devices leave the house, disconnect from Wi-Fi, or even join another network. The initial $129 price includes a one-year subscription, then it’s $10 a month after that.

More parents are giving kids smartphones at younger and younger ages, to “get ahold of them easily and track their location,” according to a Nielsen report. The study also shows that nearly half (45%) of kids in the United States — ages 10-to-12 — now have a smartphone with a service plan, and that number jumps up to 95% of teens.

While it’s great to be able to reach our kids, it’s not-so-great serving up an all-access pass to potentially harmful content, online predators, gaming addiction, or the stress and anxiety that come with social media. 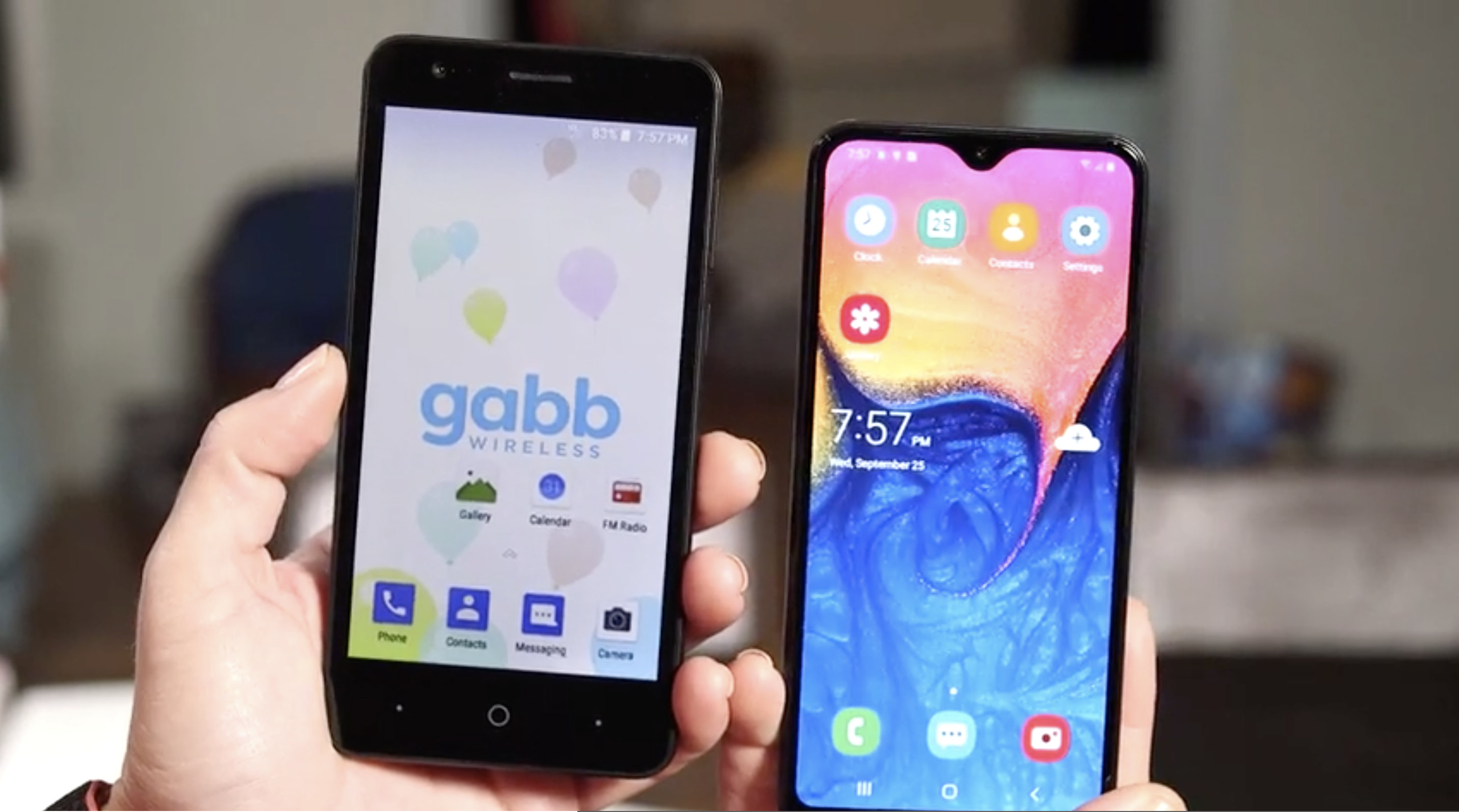 “It’s a matter of too much tech, too soon,” says Stephen Dalby, the dad behind Gabb Wireless, the first nationwide network he says is built entirely for kids. “Gabb helps parents manage their children’s exposure to technology in a way that is safe and meets each family’s unique needs.”

Gabb offers two paired-down Android smartphones, the Z1 from ZTE ($100 + $20/month service plan) and the S1 from Samsung ($200 + $23/month service plan). Both phones keep kids connected with unlimited talk and text, along with handy tools like an alarm, calendar and calculator apps.

But it’s what these smartphones don’t have that’s key: No internet browser or app store, no access to social media, potentially addictive games, or adult content.

Video games, and how much time many kids spend absolutely zombi-fied by them — is another daily battle for many parents. In a study published last month in JAMA Pediatrics, researchers found a correlation between kids excessive gaming and poorer academic achievement. But how much time is too much, exactly?

The American Academy of Pediatrics’ guidelines on screen time is a must-read. The TLDR version? No screentime except “video chats with relatives” for kids 18 months and younger, and kids younger than age six should only get about one hour per day of “high-quality programs” that they watch with grown-ups.

The AAP’s online family media planner is one of the best tech tools I’ve come across to put this all into perspective for parents. You can type in your child’s age, how much time they spend on things like school, homework, and mealtimes, and it calculates how much time they have left for screen time. No big surprise, when you add up everything kids do these days, there’s often zero time left for gadgets. 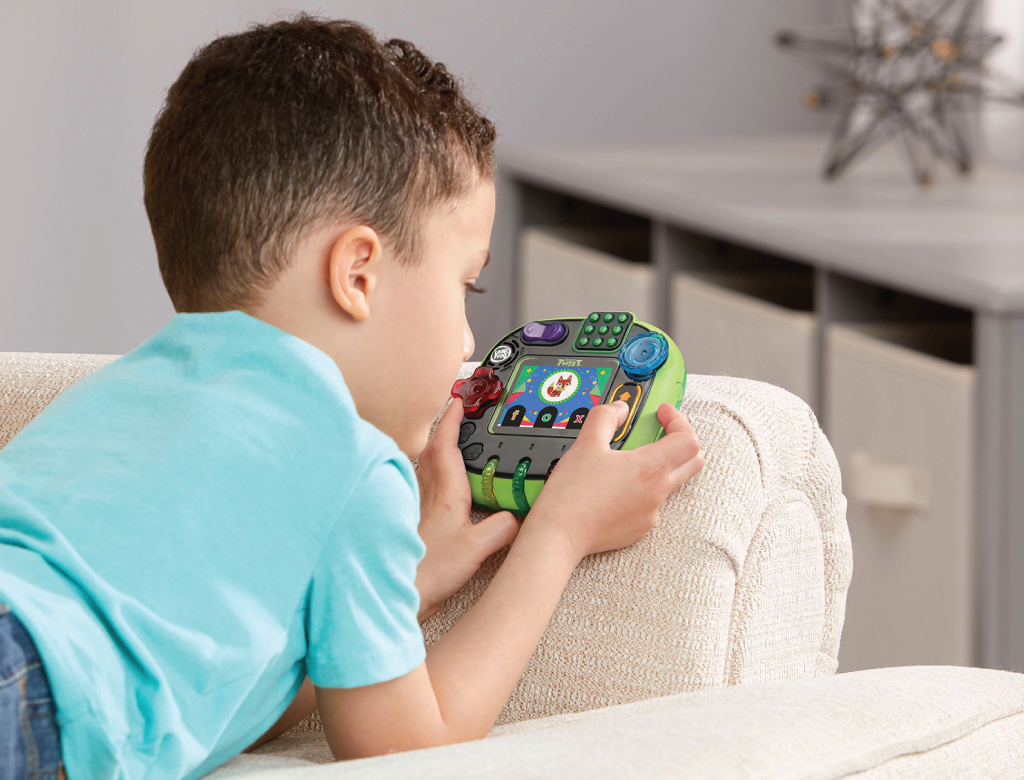 Training wheel tech comes in handy here too. Another great gadget — this one for age-appropriate early gaming — is the LeapFrog RockIt Twist ($60). Created for kids ages four and up, this handheld educational gaming device infuses fun, learning, and safe limits all in one snazzy gadget. Kids can twist, turn, play and learn with four sides of light-up controls including buttons, dials, a spinner, slider, switch and more.

It’s an easier-to-manage alternative for young minds than say Minecraft or Fortnite and comes with12 preloaded games that teach skills such as literacy, math, problem-solving and creativity. You can buy more game packs, and my reviewer team of kids really loves the interactive RockIt Pets add-ons. These little $8 critters hatch and grow from eggs, with physical toys kids can send on virtual adventures.

More than half of parents in the United States with kids under the age of 18 felt pressured to overspend on back to school gear this year, according to a recent Bankrate survey. Since new gadgets are often the big budget-breakers, be sure to take a look at Chromebooks.

Chromebooks are basic, budget-friendly devices. They are perfect for a family homework station, or for anyone who mainly uses their laptop while connected to the Internet, with most apps and documents living in the cloud, 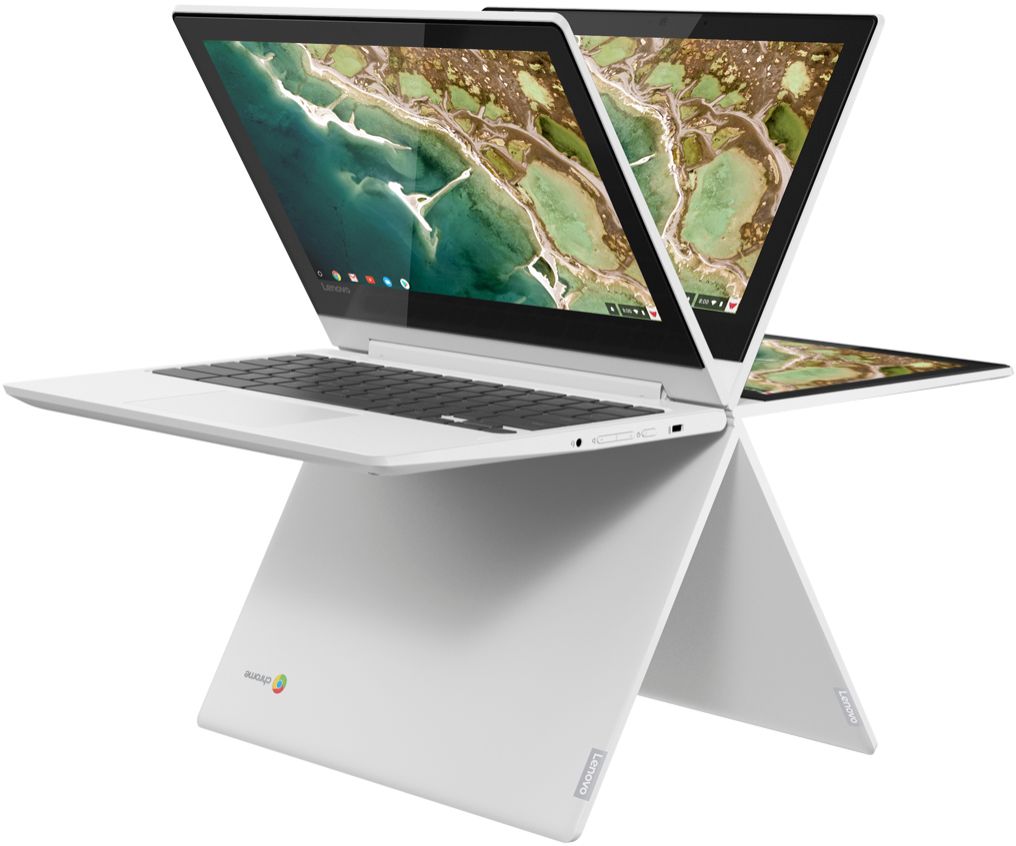 I use the Lenovo Chromebook C330 ($280) at home. What I like most about it is that it’s super easy to use — no setup needed — just log in with your Google account, connect to WiFi and you’re off. It also comes with built-in virus protection, 10-hour battery life, and a 360-degree flip-and-fold design. (That’s the icing on the Chromebook cake for me.) It allows different modes of use including tent, tablet, laptop, or stand mode.

Every expert I spoke with for this story reiterated a tactic that just happened to work really well with my daughter too: Put your own gadget down and listen — without reacting — to your kids. Ask a few questions and resist the urge to chime in and get all judgy, especially about tech.

“If you communicate respect, affection, and understanding, kids will develop emotional intelligence,” says Dr. Delaney Ruston, a physician, and mom, who is now releasing a second documentary on teens and screen time called, Screenagers, The Next Chapter. “Don’t give up on finding ways to limit screen time — even if you think that ship has sailed.” 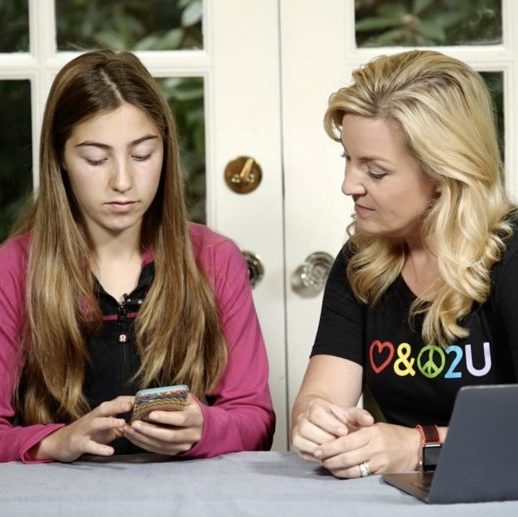 My daughter, Jeneva Toolajian (18), is often featured in my stories around kids and technology. She self-regulates her tech use much better than I do!

My daughter was great at self-regulating her own screen time. She didn’t get a smartphone until I gave her one of my old iPhones for Christmas her Freshman year of high school. She put it in a drawer right when she got home from school, and only took it back out once her homework was done.

Don’t get me wrong, I could be a real nag about it too, and we set rules early on: No gadgets at the dinner table and no gadgets in the bedroom at night. I had her passcode, followed her on social media, even her finsta account, and told her that I would monitor her online life for as long as I bought the gadgets and she was under my roof. I explained that it had nothing to do with not trusting her, but rather that it was my job to keep her safe — just like how I made her wear a helmet on her bicycle, or taught her to drive a car.

In what other aspects of life would you hand over access to the entire world — and every bit of content and creeper in it — to a child and just hope for the best?

Of course, there are many more tools out there, and I will continue to try them out and let you know what I — and my real-life reviewer team of kids and teens —  think about them. In the meantime, be sure to join the conversation around all of these issues on social media, or in the comments section below.