HOW TO: Clean up your smoky, germy, dusty, or smelly indoor air 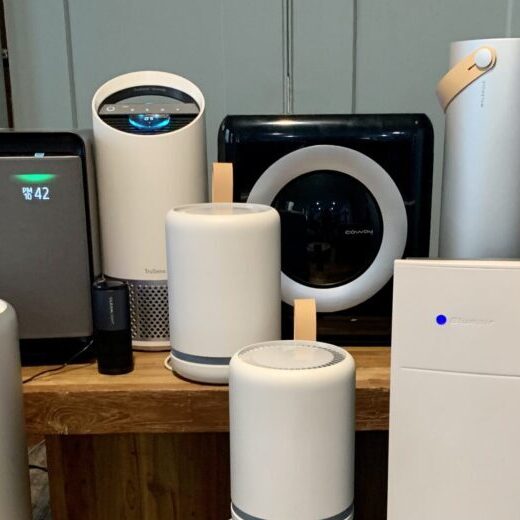 Thousands of people have asked me about portable air purifier recommendations in the past few weeks, but the most urgent inquiry came from one of my own lifelong friends, 49-year old Patrick Bryson.

Bryson and his family live in Portland, Oregon, where nearby wildfires created some of the worst air quality in the world. The smoke triggered his allergies and caused his teenage daughter to break out in hives.

He had five high-end Molekule air purifiers loaded into a virtual shopping cart, but before he spent thousands of dollars on devices with a couple notably poor reviews online, he wanted my advice.

“I really like the two models I’ve reviewed,” I texted back right away. “They’re so much better looking than most. The app is glitchy, but I have [Molekule’s] earliest devices. Without the app working well, it’s tough to tell what it’s doing. Except that I’m never hoarse anymore, which is huge,” I added.

“I paused my purchase,” he texted back. “It’s rare that Consumer Reports savages something like that,” he typed.

“Good thing I’m reviewing the latest air purifiers right now, including the newest Molekule models,” I responded. “I’ll have updates for you within the week.”

AMERICA’S HAVING A BAD AIR DAY

This exchange highlights one of the most significant consumer tech purchases people could make this year.

All that toxic smoke from wildfires in the West spurred a massive surge in sales of portable air cleaners. Several top devices are already in short supply, and consumer shopping experts warn there’s a good chance many will sell out this fall — if they haven’t already.

Coway, makers of one of the highest rated models, said via email that it sold more air purifiers during the month of August this year — than in all of 2017. “Air purifier sales have more than doubled in the past month. This is a 560% increase compared to August 2019 sales of air purifiers,” a company spokesperson noted. 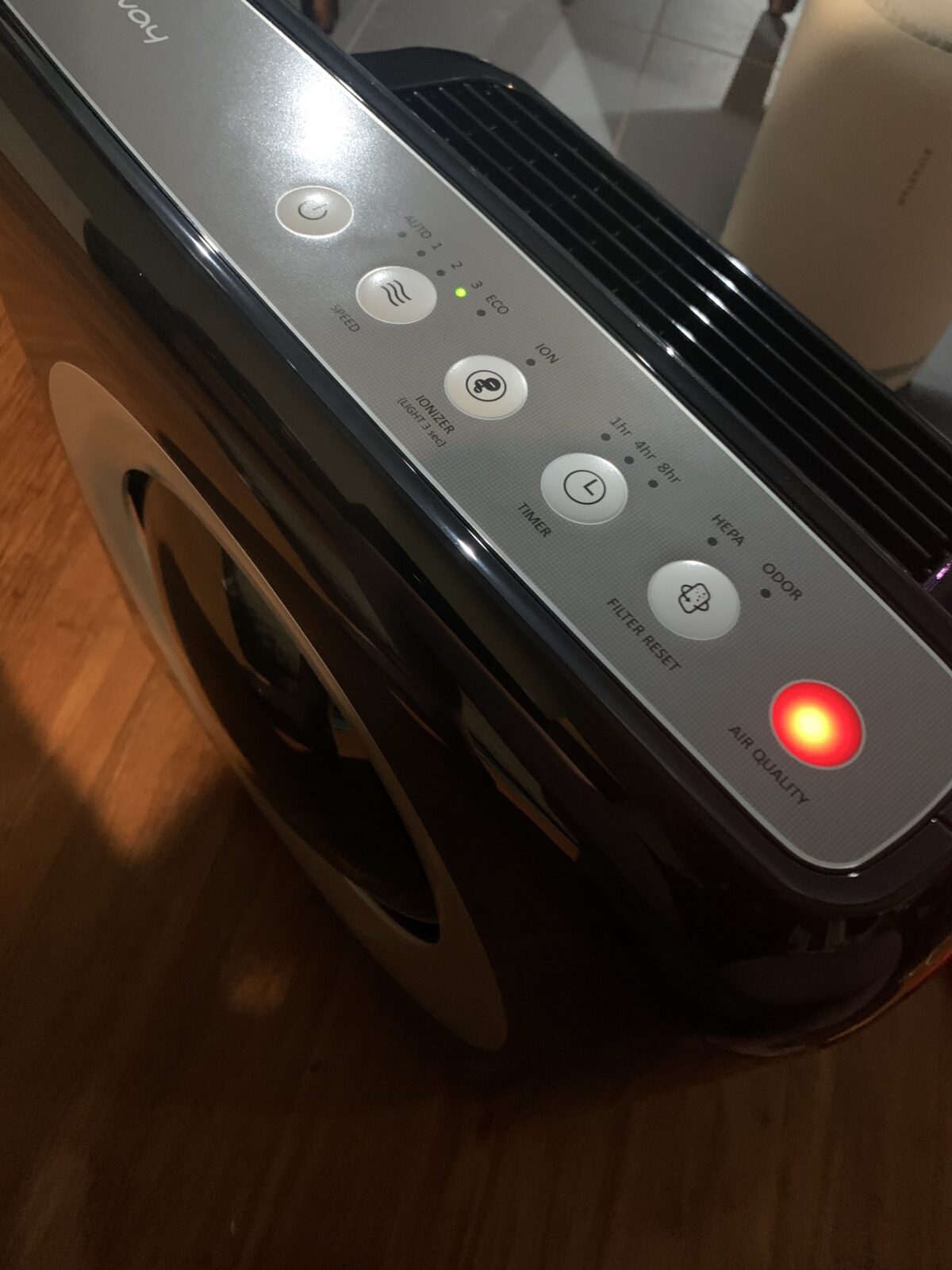 Even if you were spared the smoky aftermath and possible lasting health effects from sooty skies, there’s mounting evidence these devices could provide an added layer of protection from  COVID-19. (Though important to note here: they are not considered a substitution for social distance, masks, and other important precautions.)

Indoor air pollution is already worse than most people think. In a perfect year, 96% of homes in America have at least one type of indoor air quality problem. Add in smoke, a pandemic, the on-set of annual flu season, and colder temperatures sending more people inside to share enclosed spaces with others — and for many, it’s a no-brainer.

“All of these conditions could be cause for some concern,” Dr. Michael Matthay, a professor of medicine and a critical care specialist at the University of California, San Francisco told me over the phone. “People should get portable air filters for as many rooms as they can. It can be a relatively easy way to get cleaner air in a place where people are in close contact,” he said.

Health experts say ventilation is key. Open windows and doors and let as much fresh air in as possible, unless of course, you live in a smoke or pollution zone.

Use HEPA filters with your HVAC system, and change them often. HEPA filters force air through a fine mesh and trap particles, but they don’t work when they’re dirty.

That same layer of gritty ash that turned our skies an otherworldly orange color a few weeks ago, also made the HEPA filter on our central heating system look like those old black lung models from anti-smoking commercials. 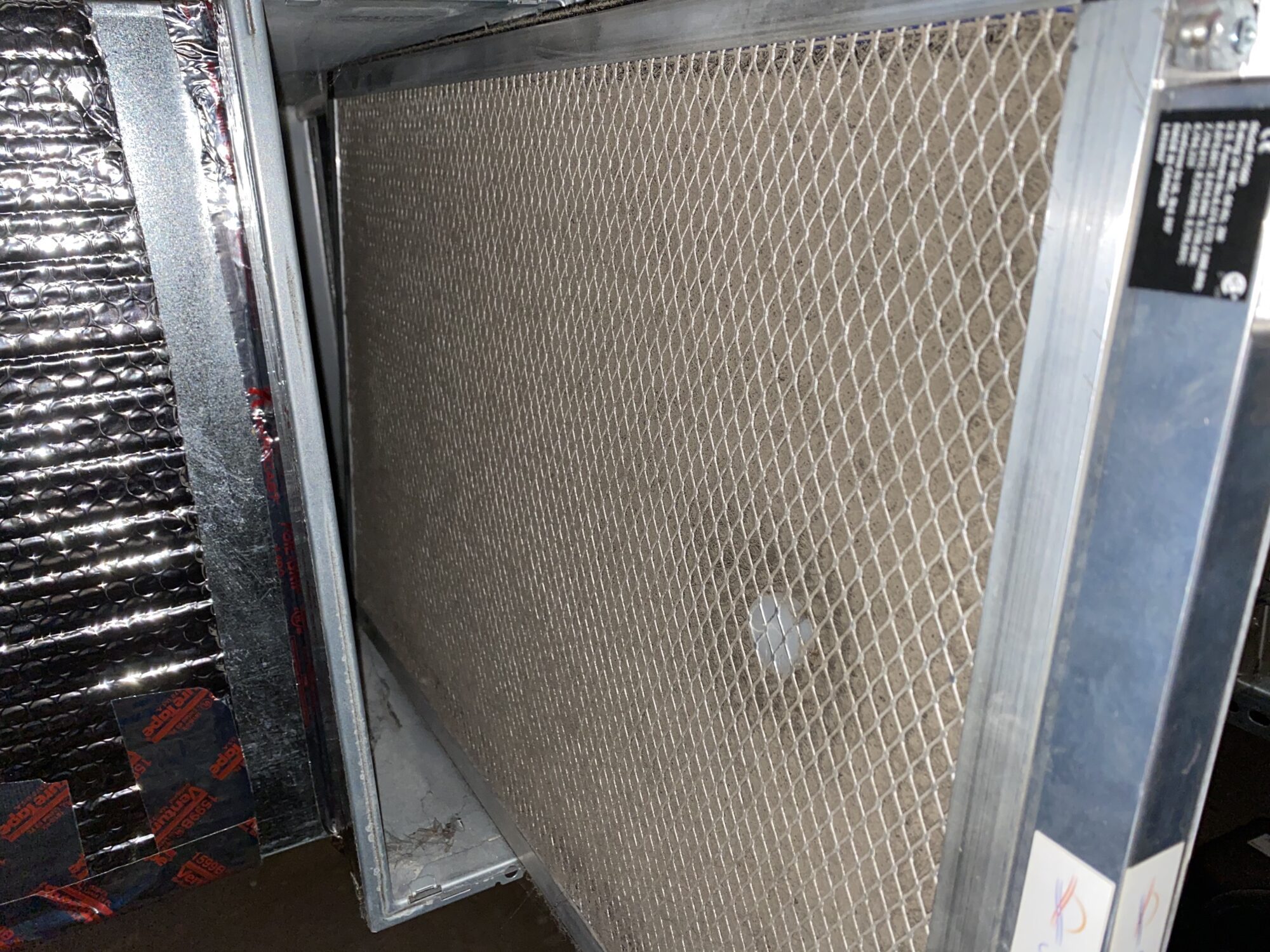 You can even create your own DIY air filter by covering the front of a box fan with a HEPA furnace filter or one rated MERV-13 or higher. Just be sure to turn the fan off if you leave the house.

HOW TO BUY THE RIGHT AIR CLEANER

I’ve reviewed dozens of different models of air filters throughout my tenure as a tech reporter, and doubled-down on reviews after discovering how bad the air was inside my own home.

The main features to note when looking for one — or several — of your own are price, looks, and credibility — ie., does it actually do what it says it will?

“Even when you’re trying to protect your health, you can be swindled,” environmental toxicologist Luke Montrose at Boise State University told me over the phone. “Avoid gimmicks, oversells, and other marketing that make it sound better than it is,” he cautioned.

Montrose and chemist Hugo Destaillats at Lawrence Berkeley National Laboratory, said to look for a HEPA-filter device with a clean air delivery rate, or CADR, of 300 cubic feet per minute or better.

HEPA, or “high-efficiency particulate air” filters pull air in, pass it through a filter that removes small airborne particles and sends clean, particle-free air back in the room. Most HEPA filters can remove at least 99.97% of airborne particles with a size of .3 microns — and even more particles of other sizes — big and small.

All 11 models of air cleaners I currently have in my home test lab (aka, living room) were easy to set up, seem to work well, and have varying degrees of bells and whistles like app integration and automatic filter refills. In other words, I don’t hate any of them, but a few do rise above the rest for form, function, and affordability. 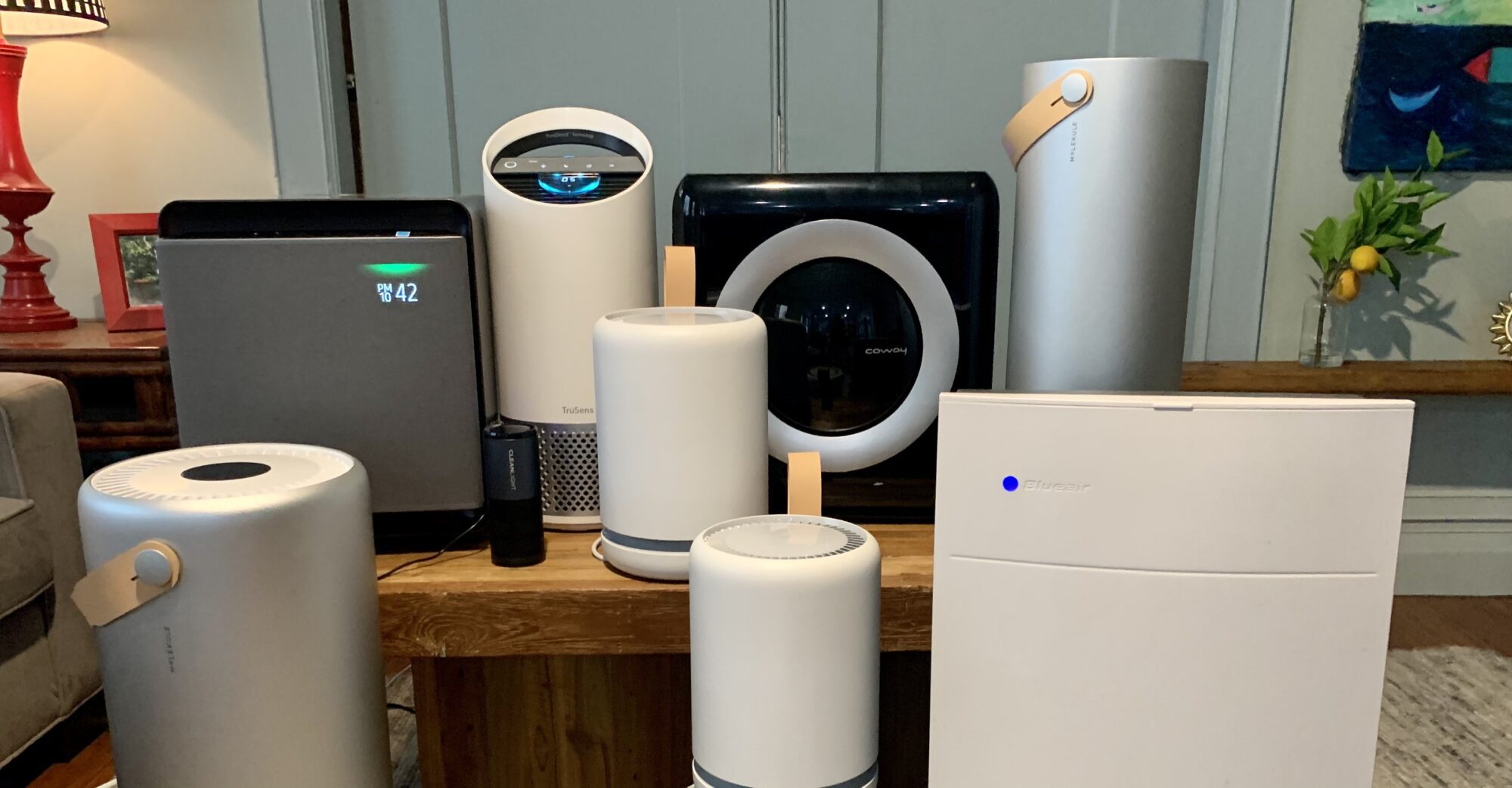 SO WHAT SHOULD I BUY?

Here’s my advice for my bff. What you buy is all about you, similar to the way you buy a car or even a smartphone these days. How much can you afford to spend, what do you expect it to do, and what do you want it to look like?

For as little as $100, the Levoit Core 300 is a solid pick for a small bedroom, office, or nursery. It’s quiet, you can turn the glowing display light off at night, and it promises to clean the air in a 215-foot space five times per hour.

For a little more money, the Coway AP-1512 HH ($230) is so popular it’s hard to find anywhere in stock right now. It looks like a mini retro front-load washing machine, which makes it a little more interesting than the other solid square devices. It’s made for rooms up to 361-square feet, — the size of an average bedroom — and can deal with dust, pollen, pet dander, smoke, odors, and other pollutants. Turned on high though, it’s too loud to run in my bedroom all night. Still, with it’s filter-change indicator, dirt-sensor, and red light that tells you when the air’s nasty, it’s still one of my favorite’s.

For $299, I also really like and recommend Blueair’s Pure 211+  or Dyson’s Pure Cool TP01 air purifiers too. Both perform really well, look sleek, and add a little style to the otherwise “dorm refrigerator” square appliance look.

Of the larger, higher-end models, one sent over by the Asthma and Allergy Foundation (AAFA) — Samsung’s Cube Air Purifier ($749) — is a solid upgrade for small or medium sized rooms (up to 310 square feet). It’s voice enabled, Wi-Fi connected, sports a higher-end metal design with a cool robotic feel, and it’s also certified as asthma and allergy friendly based on third-party testing 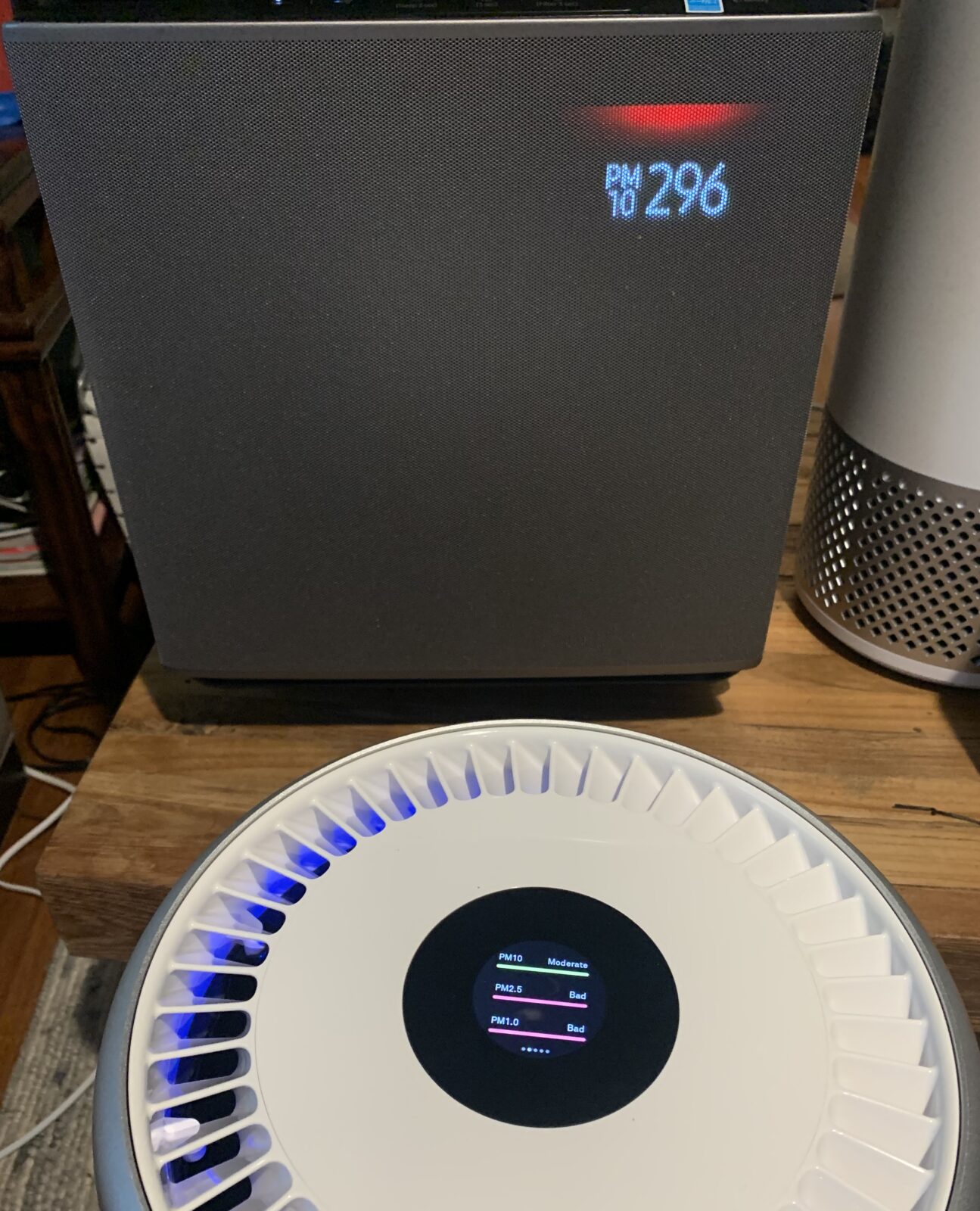 But, one I use in my own bedroom, and plan to have sitting on my headboard for the rest of my life is the just released Molekule Air Mini+ ($499).

The reason I picked this one is because it actually fixed a health problem that plagued me for months. After being hoarse for so long I was examined for nodes on my vocal cords while sucking down several packages of throat lozenges a week, I put the Molekule Air Mini ($399) right above where I sleep at night. My raspy, irritated throat, and deep scratchy voice disappeared.

I’m skeptical though, and I wondered — with all the negative reviews — if my experience was coincidental.

I took the Molekule out of my room. Sure enough, all the symptoms came back. Still not convinced, and thinking it was purely psychosomatic, I tried several other air cleaners in my room. No change, and I was starting to sound like a chain smoker again.

Within a few days of putting the new Air Mini+ in place, all symptoms were gone. I repeated this little “experiment” several times, always with the same result.

I’ve also put the new Molekule Air ($799) and Molekule Air Pro ($999 pre-order sale) through their paces right next to all the other purifiers I’ve tested and both continue to work really well too. They are whisper quiet, the app now works without a hitch, and they’re much more aesthetically pleasing than comparable devices.

WHAT’S ALL THE FUSS?

Aside from costing a small fortune, this is a somewhat controversial air purifier because it doesn’t use HEPA filters. It uses its own patented photo-electrochemical oxidation (PECO) technology to “not just collect pollutants, but destroy them as well.”

A few reviewers have panned it, and an advertising watchdog rejected wording in its claims.

I spoke with Molekule CEO and Co-Founder Jaya Rao via video call last week. She said that the confusion stems from testing the PECO devices the same as HEPA filters.

“People want to look at our company based on what a HEPA filter can do. We have a new approach to air purification. We’re not just filtering the air of airborne particles – we’re also destroying a whole host of microscopic pollutants,” Rao said.

The company also points to the FDA’s clearance of the Air Pro RX as a Class II medical device, and Rao says that Molekule’s devices meet “the applicable performance criteria in the FDA’s recent guidance for use in helping reduce the risk of exposure to SARS-CoV-2” in healthcare settings during the pandemic.

Here’s the entire list of what I’ve tested (so far) – prices may have changed since I published this story: All of these are great – I’ll add details on each in a separate column shortly and link here.