Someone asked me if CES 2022 has offered “a fix for Covid,” yet. After all, it is the epicenter of future tech – chock full of all kinds of innovation, inventions, and wild ideas – that just might become one of the top gadgets of its time. Past shows brought us the first home VCR, Tetris, Oculus Rift, and who could ever forget the toilet-paper delivery robot?

Alas, there was no new magical device to cure COVID this year – or even help get rapid tests to areas overrun with omicron – which now includes Las Vegas, too.

But there was a cute little plushy robot that nibbles on your fingers to “comfort you and brighten up your day,” which once again reminds me you can’t make this stuff up. While that’s one you can’t forget because it’s just so… odd, yet awesome, there are several more that caught my eye. Here are the most notable gadgets to come out of CES’s wellness category, which includes health, fitness, and yes, even a stuffed animal that chews on your fingers.

The digital fitness industry’s having its “on steroids” moment, metaphorically speaking of course, and an at-home rowing machine called Hydrow made quite a splash at CES.

It’s basically the Peloton of rowing, with perky, tough, and inspirational instructors leading you through more than 3,000 live and on-demand workouts atop a machine that feels more life-like than most other rowers on the market. It’s quiet, and you can customize the drag to cut through imagined water with meditative ease – or go all out in a full-fledged race. It also offers scenic rows in beautiful places like Walden Pond in Massachusetts and Lake Lucerne in Switzerland.

If done correctly, rowing engages 86% of the body’s major muscle groups, yet it’s low-impact and easy to learn, whether you’re a beginner or seasoned athlete. I’ve been using it daily for the past two weeks – and wow, I’m sore in places I didn’t even know I had muscles.

At just a tad over 7 feet long, two feet wide, and almost 4 feet tall measuring to the top of the monitor, it takes up its fair share of space in your average living room. The company sells an $80 upright conversion storage kit that secures to a wall and provides a quick fix for tighter spaces. Just bear in mind that the machine weighs 145 pounds so merely moving it from horizontal to vertical is a workout.  The cost is $2,295 + $38/month subscription, but check the company’s website because as of the time I’m writing this, they have a big sale going on until Sunday.

Here’s one for the littles: The Picoo “outdoor game console” shows promise for getting kids ages 4 to 12, off their screens and outside to play and run around. The starter set ($281) comes with four “consoles” – which are screenless, flashlight-looking handheld controllers that light up and use a speaker, accelerometer, and vibration for play. The set also comes with five cards suggesting games like Whack-a-Mole, Zombie Run, or Lighting Bolt. To start, a child scans a card, then follows tasks either solo or as part of a team. What really stands out is that it’s social, encourages kids to go outside, is safe and quite inclusive for any special needs.

We’ve seen a slew of UV light sanitizing gadgets launch since the start of the pandemic, but we’ve never seen one that sticks to the back of your own smartphone before. The UVCeed ($129.95) is a just-slightly-larger-than-credit-card sized device that magnetically attaches to the back of your smartphone and promises to kill 99.9% of germs, bacteria and viruses, including COVID-19.

The company’s press release says it uses “powerful mercury-free LED UV light rays and multiple sensors,” to scan and sanitize most common surfaces in seconds, including keys, keyboards, remote controls, and doorknobs. It’s not safe to use on your own skin.

The way it works is simple; attach UVCeed to your phone, open its app, point your phone at a surface, press a button that appears in augmented reality on the app, and watch as it zaps nasties in real time. The lights turn themselves off if it senses a human or animal, so it’s built not to expose anything that shouldn’t be, to the UV-C type radiation. It retails for $130 and is available to buy now.

My husband is fairly immune to the lures of a cute gadget. He sees many of the 1,000+ new devices I review every year and he’s pretty over it all. Then, Bob the Mini Dishwasher arrived at our doorstep, and he now has a tech-crush the likes I’ve never really seen before.

The WiFi-connected, microwave-sized mini dishwasher snuggles up next to your sink and can wash dinner dishes for two or a days’ worth of dishes for one using the one-gallon integrated water tank – so you don’t have to attach it to a water supply. The wash cycle is a super-fast twenty minutes, and the company says it uses five times less water than doing the dishes by hand.

Oh, and it’s another one of these just-in-time-for-COVID gadgets, with a UV-C sanitation option that kills 99% of bacteria and viruses with a waterless cycle. This one is available for pre-order now, retails for $400, comes in an array of snappy colors, and is as perfect as it gets for cramped apartments or escaping to a tiny home. 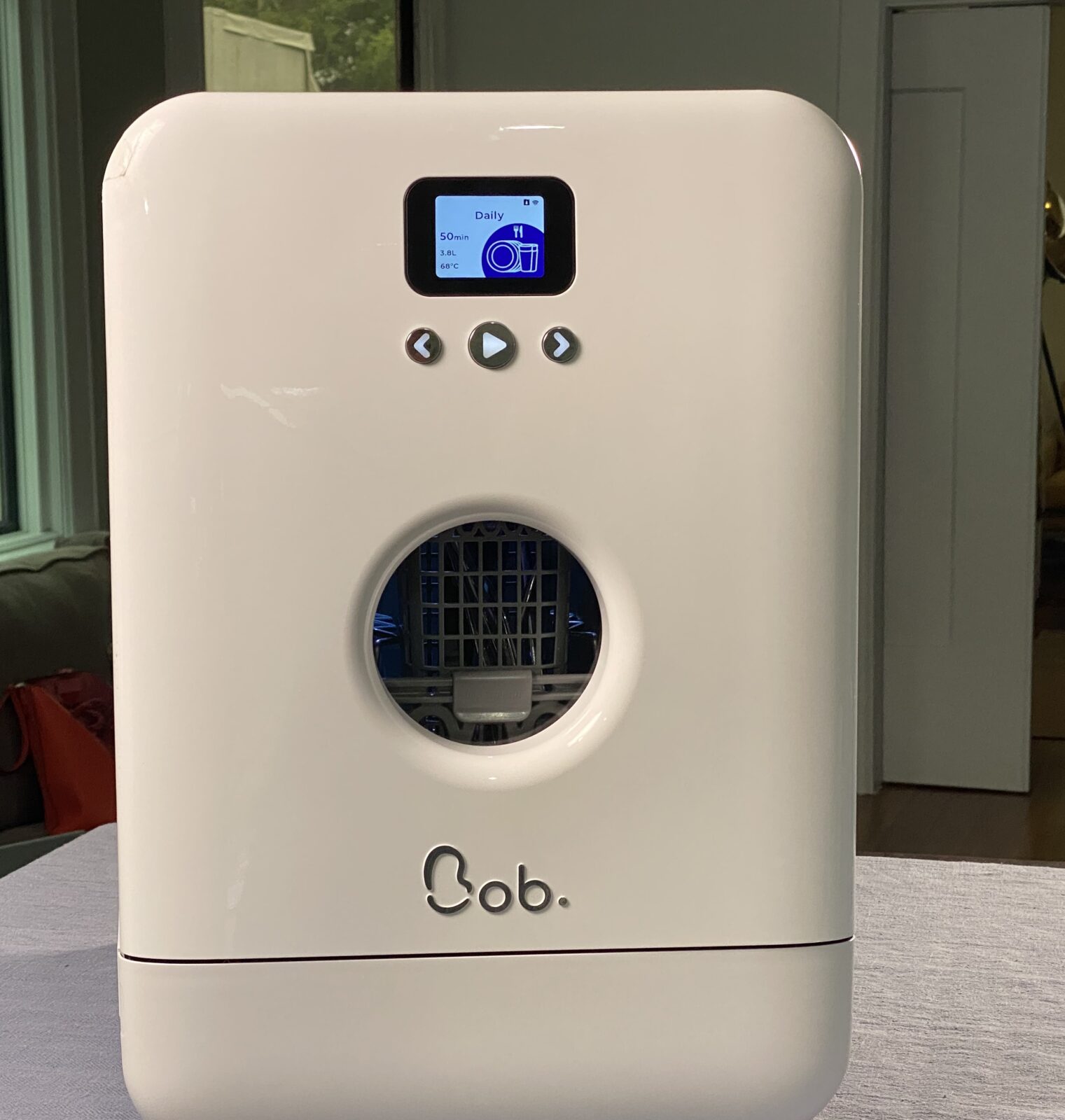 When I asked my husband why he’s so smitten with Bob, he said, “How can something this small, that takes up so little space, be this functional? It’s not needy: I don’t need any special plumbing or anything other than a place to drain it. It uses so little water. It’s just really cute. I want to tuck it under my arm and take it for a walk around the block. And it saves me from hand-washing all those dirty glasses I find at the end of the day that you’ve left lying around everywhere.” 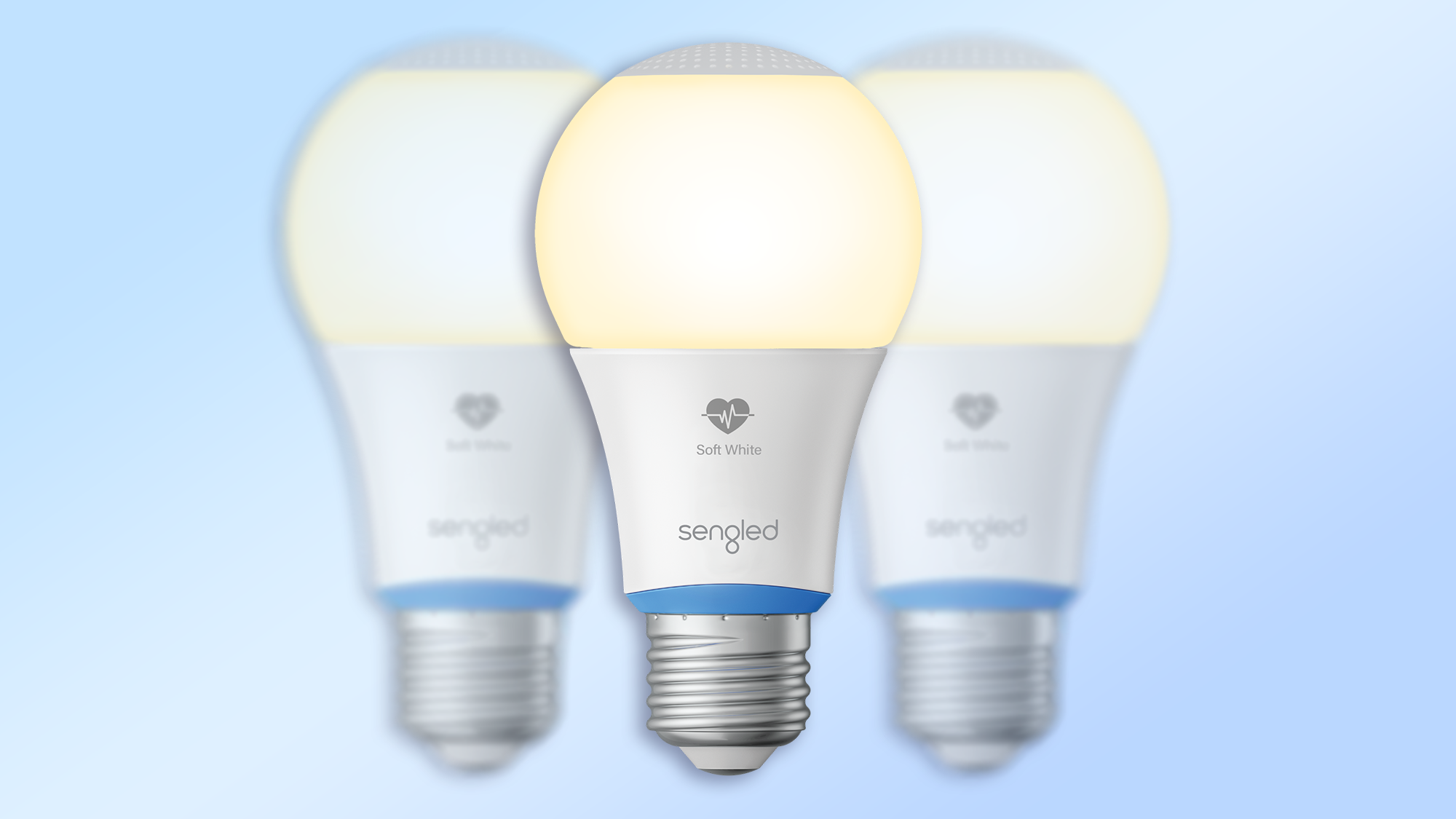 Could your lightbulb help you out if you’ve fallen and can’t get up? According to a company called Sengled, the answer is a resounding, “yes.” It just unveiled a Smart Health Monitoring lightbulb with a Wi-Fi and Bluetooth mesh dual chip, that uses radar to track biometric measurements such as heart rate, body temperature and other vital signs like sleep monitoring. In a press release, the company says that by connecting multiple bulbs via Bluetooth Mesh and creating a virtual map across your home, the smart light “can even help detect human behavior and determine if someone has fallen and then send for help.” It’s expected out in late 2022; no word yet on a price.

From the company that gave us that weird, furry pillow with a prolific wagging tail, Quoobo, a few years back, comes the year’s most oddly intriguing new wacky gadget: the Amagami Ham Ham finger-nibbling stuffed animal robot.

The man who invented it says it’s built as a comforting companion based on the character from Japan’s wildly popular “Nemu Nemu” stuffed-animal series. “The robot uses a special algorithm, “HAMgorithm,” to randomly select from two dozen “nibbling patterns” to keep users interested,” reads the press release. “Most people like the nibbling sensation but know they need to teach their children or pets to stop it, because kids and animals will otherwise bite them with full force eventually,” adds Tsubasa Tominaga, the Yukai Engineering CMO who came up with the idea. “It’s our hope that playing with this cute robot will comfort you and brighten up your day at CES 2022,” he said.

I have asked for a review unit of the odd little character, and the company promised to send one with the next month or two, so expect a follow-up, fingers-on for sure.