It’s 2021, and by now most of us know it’s rude to talk on our cellphones in a public restroom, restaurant or at the checkout counter. We understand that texting and walking can be hazardous to your health – though it sure makes for hilarious GIFs (pronounced JIF, btw) and viral videos. We even totally get that WRITING IN ALL CAPS is the digital version of yelling.

What about all the new rules on digital engagement? There are thousands of unspoken social norms most of us at least try to follow every day, but when it comes to our online world, it’s tough to keep up.

Here are seven – if not deadly, then at least discourteous – digital sins you might make without even realizing it.

OK, I do this all the time and had no clue that it’s now considered the equivalent of a virtual middle finger. Apparently, all the cool kids have known this for a while, according to Urban Dictionary and thousands of Reddit posts on the topic.

The backstory goes something like this: For a brief and glorious time in the early 2000s, using the single letter “K” to agree with someone was a great texting shortcut. That all changed sometime in the 2010s, and now, “OK” is OK. “KK” is OK. But “K” is not OK unless you are angry and passive-aggressive.

So, to all of my friends and family who’ve gotten a “K” from me lately. I’m sorry. I’m old. I am not flipping you off.

We good? 👍🏻 Erm, no. That thumbs-up emoticon might also make some people angry, since that can be considered a passive-aggressive dismissal intended to permanently end the conversation.

Wow, I’m 0 for 2 already and we’re just getting started!

2.  Clean up your Zoom room

Unless this is a promotional screengrab for the TV show “Hoarders,” this kind of shot should not happen in 2021. For all this man’s expertise, background, and gravitas commenting on the horrific discovery of human remains, all most of us can see is the need for an intervention.

Clean up your Zoom house already.

No one wants to spend the entire call trying not to look at something unsettling in the background. So do a quick camera check before you Zoom to make sure there isn’t a naked baby, a child playing with a rifle, a pile of dirty laundry, or an offensive photo in the frame.

“Use a background that is clean, uncluttered, professional, and not overly personalized,” recommends the Emily Post Institute Inc. “And test each piece of equipment in the way it will be used before you rely on it for a call.”

And while we’re here, anytime you appear on a video call, be sure the camera is pointed at your eyes, not looking up your nose or focused on your forehead. Pay attention to the lighting. A window, lopsided lighting, and dark shadow distracts other people. Put a lamp near your face and avoid sitting with your back to a window.

There’s no shortage of people willing to forego humanity and common decency in the quest to become social media famous these days. These are the people who just don’t seem to understand that while it’s important to be authentic and emotionally vulnerable, faking either can get you canceled faster than Piers Morgan commenting on Meghan Markle. It might make you an infamous scumbag, too.

This includes overly editing your photos and videos, especially if you preach body positivity. Most of us know of a celebrity who does this – cough, Kardashians, cough cough –  but we see it all the time from regular people, too. Those too-big lips, that too-smooth skin, and overly Photoshopped bulbous booties have got to go.

Pretending to be someone else is a very bad idea – it’s called catfishing – and is considered a crime in many cases. If you’re not sure what this looks like, read a few stories about Sarah Delashmit, the woman who faked cancer, MS and more to get trips and sympathy. 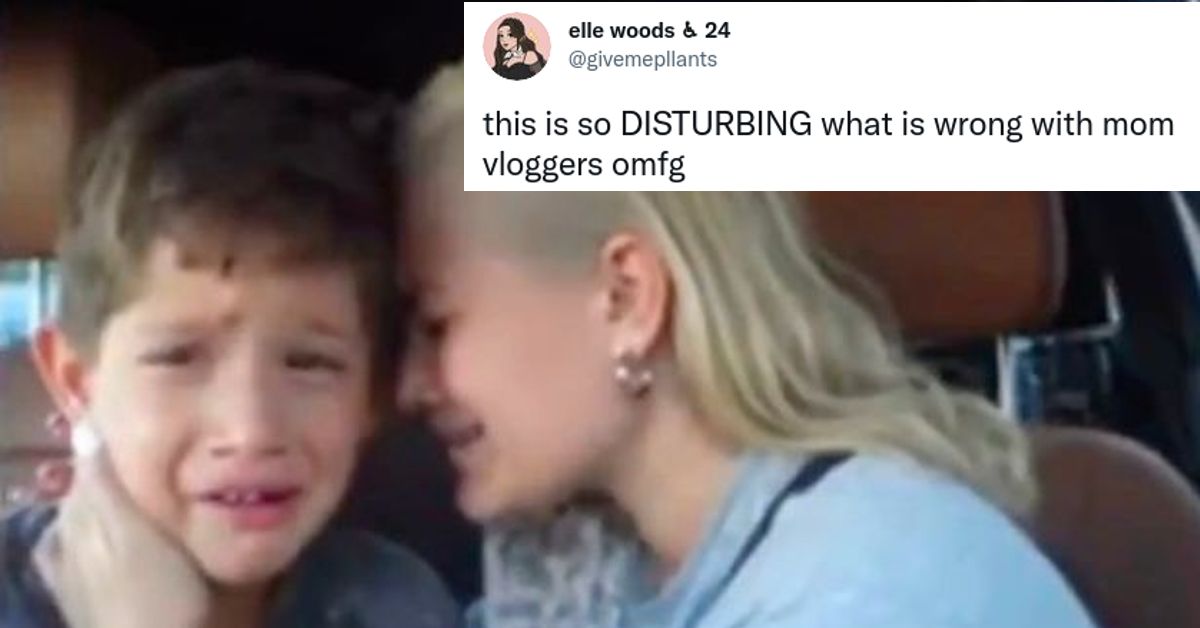 One of the most recent examples of this revolves around popular vlogger Jordan Cheyenne. She was caught on camera coaching her 8-year-old son to make the perfect crying face for a photo after finding out their dog had a potentially deadly illness. Her son was actually crying and heartbroken. It’s not only disturbing to watch but downright disgusting to realize how low people will go to get clicks, likes and follows.

4. Don’t even – with these kinds of selfies.

Posting particular photos on social media could endanger your job, your relationships and your identity. Or just make you look like a giant jerk.

Gym, locker room and bathroom selfies have been a no-go for years now. So have drunk, naked and otherwise sloppy selfies you wouldn’t want your Grandma, children or boss to see. It’s also super-rude to block a public place trying to get your obnoxious selfie. (I travel a lot and see this all the time.) 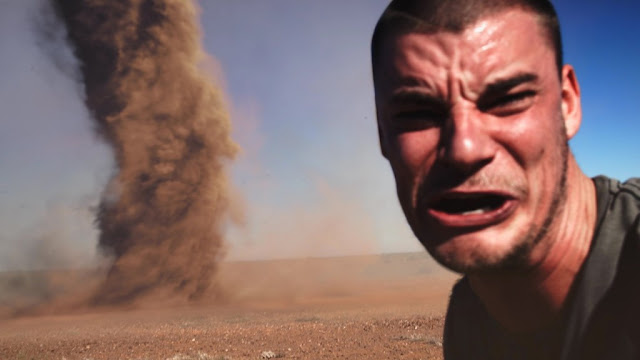 Recent additions to the do-not-snap list include disaster selfies and dangerous selfies where you might actually die trying to get the perfect shot. That also goes for posing with bears, bison and pretty much all wild animals. 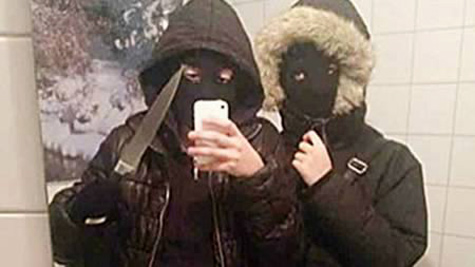 The best kind of stupid-selfie, though, is the one where you’re about to commit – or in the middle of committing – a crime. That just helps you get caught, and get the title of absolute numbskull that you deserve.

Wait, what? OK, boomer – wait, is using that term still a no-no insult if I’m talking to myself? – yes, punctuation is important, but not when it comes to texting or commenting on social sites. 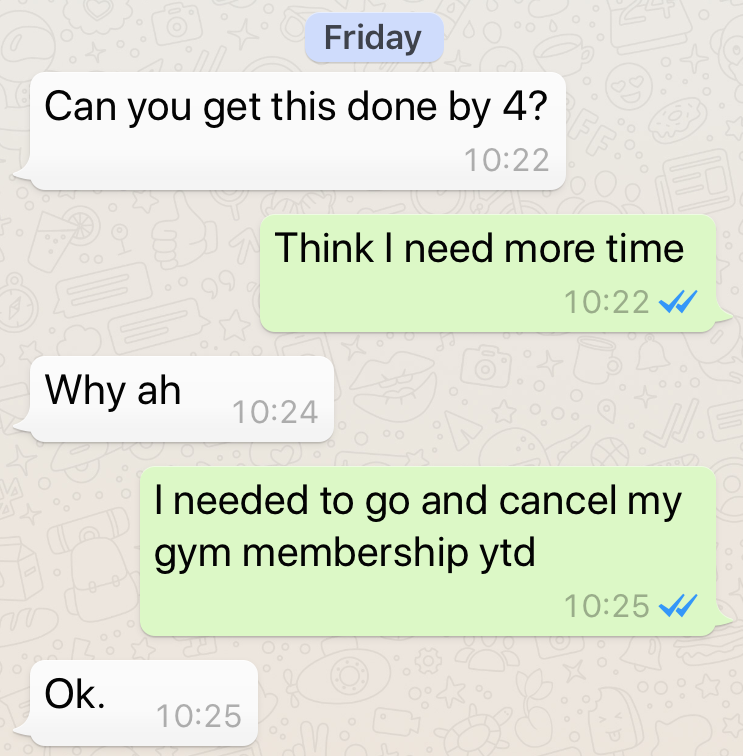 Researchers at Binghamton University in New York did a study showing a series of short messages framed as either texts or handwritten notes. The exchange was an invitation, followed by a one-word response such as, Sure, Okay, or Yup. Sometimes the responses included a period, other times they didn’t. In texts, students rated responses that ended with a period as less sincere than those with no punctuation.

“Texting lacks many of the social cues used in actual face-to-face conversations. When speaking, people easily convey social and emotional information with eye gaze, facial expressions, tone of voice, pauses, and so on,” study leader Celia Klin, now dean of Harpur College of Arts and Sciences at SUNY Binghamton, wrote in a statement. “People obviously can’t use these mechanisms when they text. Thus, it makes sense that texters rely on what they have available to them – emoticons, deliberate misspellings that mimic speech sounds and, according to our data, punctuation.”

6.   Know your LOLs from your SMHs

I have a certain elderly aunt who texts “LOL” when someone shares bad news. She thinks it stands for “lots of love.” Bless her heart.

In case you don’t know either (really?!), LOL stands for “laughing out loud,” which is now what we all do when “Auntie Em,” sends a LOL in response to news that someone’s had a bad day at work or school, been in a car accident, broken their arm or worse. 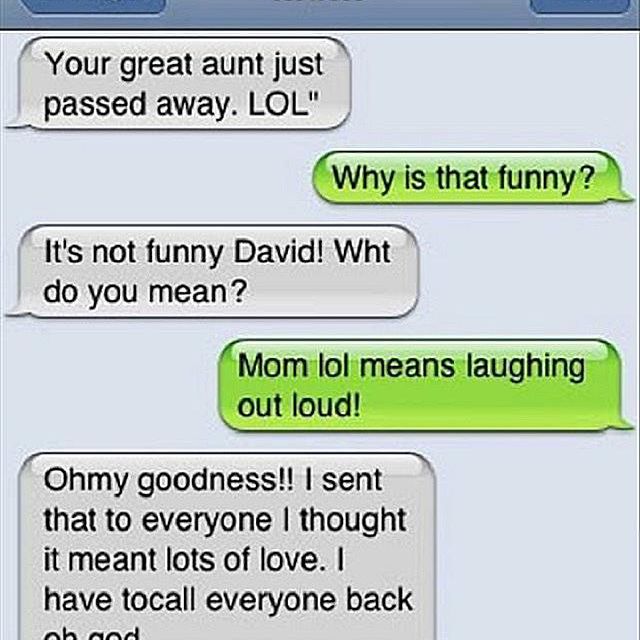 She’s not a jerk. She would be mortified to find out she’s committing a digital faux pas, and none of us have the heart to tell her.

I have a 20-year old daughter who does her best to keep me up to date on the latest internet slang and common abbreviations. If you’re not so lucky, when in doubt about using an acronym, either look it up first or don’t use it.

A friend tells you they are getting married, moving, having a kid, got a new job, or whatever. You think, “Wow, I can’t wait to post that on Facebook!”

Stop! Sharing someone else’s news, or any personal information publicly can earn you a top spot in the no-friend zone. It’s like being that gossip girl from high school that tells the entire school every juicy tidbit she knows (or thinks she knows) that no one trusts with confidential information anymore. 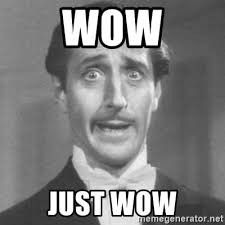 Your social media feed is for your own news. It’s not a place to show off your early access to gossip. If you’re not sure whether it’s okay to post something, assume it’s not, ask that person, and wait till you get a green light.

Wow, seven already and I didn’t even get tough on sharing fake news, shaming people, and all kinds of other rude digital behaviors we need to change in 2021 and beyond. I feel like I’m just getting started here!

What digital etiquette and modern manners snafus get you all hot and bothered? Be sure to let me know in the comments section!