If you are like 82% of parents in America, you have posted photos or videos of your kids to social media, a blog, or other places online. This might seem completely natural and innocent when you are doing it. There’s even a name for it — sharenting — and everyone else does it too, right? Your kids are cute, funny, and a big part of what you do every day. Why not share photos of them?

Because your kids are humans with a moral — if not legal — right to privacy, they won’t always be children, and you are probably doing it wrong.

“Kids at ages ten, eleven, and twelve, often have a digital coming of age,” explains Stephen Balkam, Founder and CEO of the Family Online Safety Institute.  “And that’s when they realize, to their horror, that their entire lives have been curated by their parents — and uncles, aunts, grandmas, and grandpas — and that there are pictures and videos of them going all the way back, in some cases, to Johnny’s first poop, along with lots of bathtub pictures. Unfortunately, in many cases, parents have not set their privacy settings, on Facebook and other social media platforms, to private.”

That means that those photos have been shared with the entire world. This is not only a startling and infuriating invasion of privacy for the kids to discover at a time when they are developmentally craving privacy and control; it’s also dangerous.

Can they sue you for this?

Yes. Anyone can bring a suit against anyone for anything. Will they win? It’s happened in other countries already:

“A court in the Netherlands recently ruled that a grandmother had to take down pictures she posted on Facebook of her grandchildren. The children’s parents did not give the grandmother permission to post the pictures, and her daughter, the children’s mother, sued to have the photos taken off social media.” – Washington Post 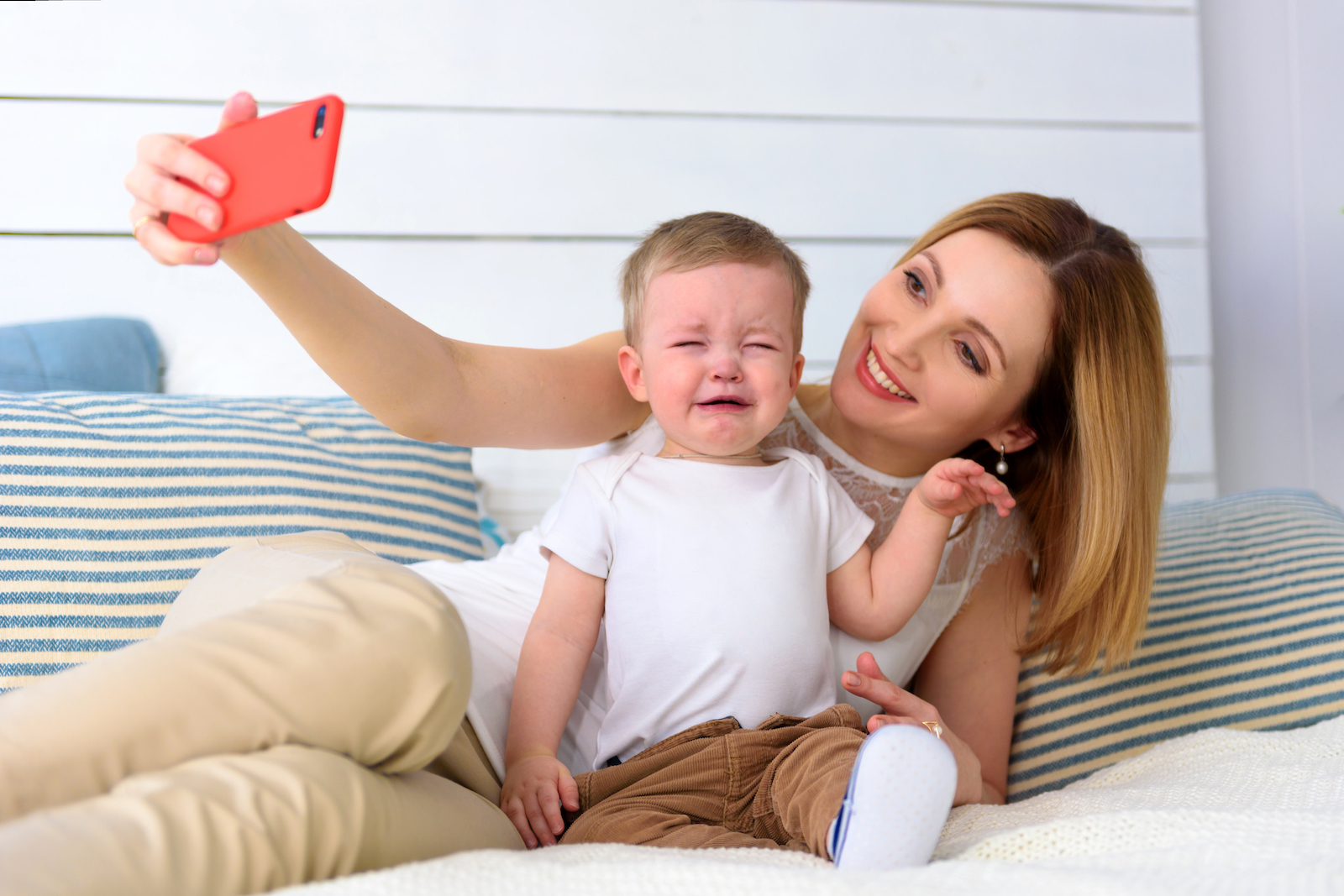 I have never been a sharent — except in private groups on social media — because I stopped for a minute to consider how my kids would feel if they grew up and discovered a cache of embarrassingly cute photos available to anyone willing to search for them. But I did ask my daughter Ava (22) how she would feel if I had documented her toilet training adventures or publicly posted her bathtub pics.

“I would be justifiably angry,” she told me. “This can’t be taken back. Once it’s online, it’s there forever. I would sue you.”

She is cautious about what she shares online and is well aware that oversharing could expose her to identity theft, stalking, bullying, and harassment. Even the idea that I had the power to expose her to these things before she had her first phone made her furious and me very glad I hadn’t done it. 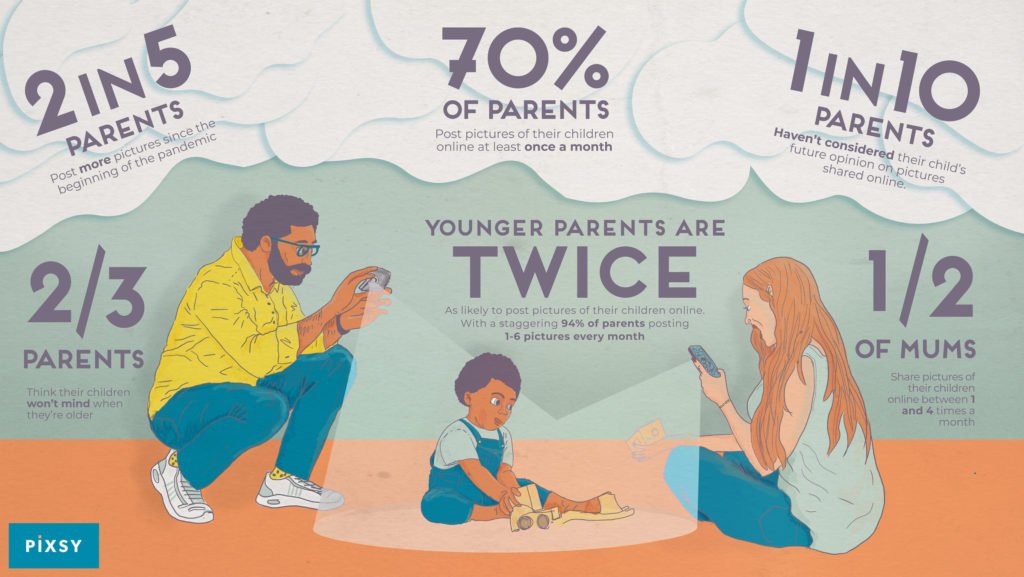 But sharenting with strangers is extremely common; according to a study done by the Children’s Commissioner for England, “Many parents share these photos with strangers: a fifth have public Facebook profiles, and over half of parents are Facebook friends with people they do not really know.”

Ava’s anger would undoubtedly be made worse if my breach of her privacy had also led to her identity being stolen, her cute baby photos had ended up in the hands of pedophiles, or if the photos or videos were used to bully or harass her.

And that is, unfortunately, often what happens to them.

“We’re not against parents sharing those adorable early photos with their kids with little or no clothing on,” says Balkam. “But do so in a way that only family or very close friends can see it. You don’t want that out in the public domain. Not only for the embarrassment factor but also because the worst-case scenario — a pedophile ring getting hold of your kids’ naked pictures — is horrifying to most parents.”

Even if the pedos don’t swap these pics, scammers and identity thieves will. Research suggests, reports the Children’s Commission of England, “that by 2030, information shared by parents online will lead to two-thirds of the identity theft committed against young people.”

By sharenting in a public forum, you have packaged together with everything a thief needs, complete with photos, and made their job easy. Along with photos, parents share names, birthdates, home addresses, places of birth, the mother’s maiden name, schools, names of pets, and more. And that information will still be available when your kids are adults. This is a gold mine for identity thieves who can put this data together to get loans, credit cards, access to accounts, and execute scams.

Whether your kids can successfully sue you for this breach of privacy is still untested in American courts. Still, there have been a few instances in the world where kids have successfully taken this extreme measure in an attempt to reign in their sharents behavior. Last year, a grandmother was ordered — by a Danish court — to take down pictures of her grandchildren that she posted after the parents sued her. And it is likely a matter of time before an adult child successfully seeks this recourse against a parent, especially if they are harmed by the sharenting. So you have to ask yourself, “Is sharing this worth the risk that I will make my future child angry enough or financially compromised enough to sue me?”

“In Europe, a child’s legal right to privacy is more codified, and teenagers and older kids have a sliding scale of privacy rights,” explains Balkam. “We don’t really have that in the U.S., but I think morally, emotionally, and for the good of your kids’ mental health, it’s very important to consider their privacy as they grow older and the impact that these photographs could have on that.”

Here’s the thing. You don’t have to stop posting photos and sharenting. You only have to stop for a minute and think about where you are posting those photos and what might be the future impact of that photo on your adult child. Check your privacy settings! Instead of posting publicly, set up a private group or change your social media privacy settings and friend group curation, wherever you do your sharenting, so that information about your kids is only shared privately with people you actually know.