This Smart Tech Can Save Your Life 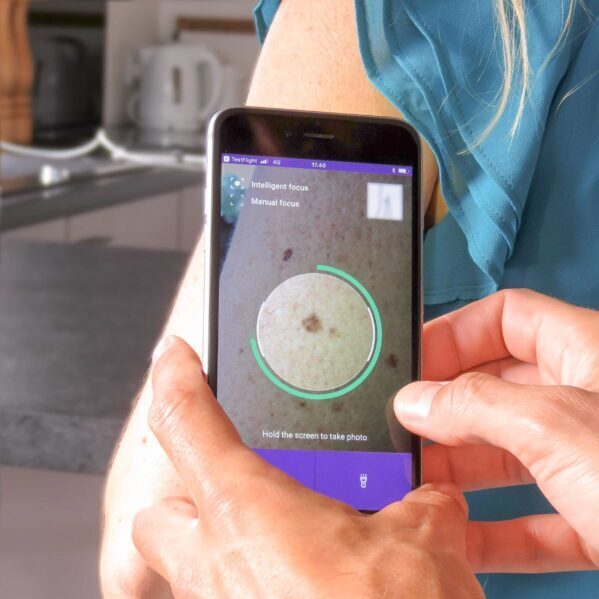 Minneapolis-based electrical engineer and mom of two, Emily Riggs, was just 34 year old when she noticed a “different looking” mole on her back.

“I saw it and just had a sense of dread,” Riggs said over the phone. “It wasn’t 100% out of left field. I had an uncle I was close with diagnosed with a late stage of melanoma, and he unfortunately didn’t live much longer after the diagnosis.”

Riggs had also just moved to a new town, but says she “started Googling dermatologists and was lucky to get an appointment right away.” Sure enough, the suspicious spot was melanoma, a serious form of skin cancer that can spread to other organs rapidly if not treated at an early stage.

“There was a little bit of a feeling like ‘this will never happen to me.’ Like what are the odds? I mean, life is so busy and it’s just not something top-of-mind. It was really scary,” Riggs recalls.

“I take the photos on the Miiskin app, and she sees them on her end. It helps me manage those days and weeks in between visits, and helps manage my anxiety [being a cancer survivor] because I have more control. This is something just so obvious in modern times, and makes so much sense.”

Miiskin, which I first reported on last year, uses machine learning, computer vision and augmented reality to help track skin conditions. It’s not meant to diagnose, but rather help keep a close eye on any changes—no matter how subtle—to share with your dermatologist or physician.

Miiskin recently launched AI-assisted face-tracking to manage—and follow the evolution and treatment of—skin conditions including possible skin cancers, acne and rosacea, as well as more aesthetic problems such as receding hairlines. This is especially noteworthy because most apps in the medical aesthetics and beauty industries exist as simple try-on tools, such as hair and makeup apps.

You can use the free basic version, or unlock all the advanced features with Miiskin Premium. The Premium version is $25 per year and comes with a 30-day free trial.

KNEE-REPLACEMENTS: ROBOTICS PROVIDE A LEG UP

My father is one of the estimated 600,000 people in the United States who will undergo a total knee replacement this year. But he’s one of millions of Americans who have suffered from chronic knee pain for years.

For some people it’s caused by an injury, or osteoarthritis, though in my dad’s case, it’s a little bit of everything: Cartilage so worn down there’s barely a thread left anymore, some ligament tears, scarring, and a lifetime of overuse. Corticosteroids injections kept some of the pain at bay until about a year ago, when they stopped working. I was with him last week and his knee is constantly swollen now to nearly four-times its normal size. He’s incredibly active, and it hurts just watching him try to walk down a small hill.

Had we known about it sooner, a new robotic knee orthotic may have given him his mobility back years ago.

“You dad is the perfect example here,” Founder and CEO of Roam Robotics Tim Swift said when I met with him in the company’s San Francisco-based lab earlier this year. “We want to give millions of people just like him a way to remain mobile between the on-set of chronic pain and the time until they need — if they need — a total knee replacement.”

Roam offers a series of heavy-duty carbon-fiber knee braces filled with high tech sensors and microprocessors to recognize natural movements of the knee joint. For example, it understands—in real time—when you need to straighten or bend your knee to navigate stairs versus walking on an even surface. An air powertrain gives the device leverage during extension — when the leg is straight — and lessens resistance when it’s bent.

The brace itself weighs about 2.5 pounds, but it’s powered by a ten pound “smart pack,” you wear like a backpack. Depending on activity level, you get about two hours of continuous movement time each charge.

There are three versions, one for everyday use called Ascend that launched earlier this year, one for skiing called Elevate, and a military version called Forge.

I had crossed paths with Swift before. He was one of the original team at Ekso Bionics that invented the rigid robotic exoskeleton to help paraplegics walk. It was during that time he said he wondered if there was a less expensive way to use robotics to bring even more mobility to the masses.

If you live in the San Francisco Bay Area, Roam Robotics lets you take the Ascend-version for a test…walk. It’s registered with the FDA as a Class 1 device, which means your health insurance may cover it in part or in full. Otherwise, the cost is around $7,000.

“We don’t yet gravitate toward robotics as a solution. But if you just look at the numbers, it makes so much sense,” Swift explains. “An estimated 100 million Americans suffer from chronic pain. Knee pain is the second most common cause of chronic pain. 1-in-4 people experience knee pain. Yet our options for treatment go from prescription painkillers, or knee injections [Corticosteroids], to a total knee replacement. We want to give millions of people like your dad an option to remain mobile and pain free for all those years in-between.”

A version of this story first ran in USA Today