Glittery, liquid-filled phone cases are like this generations Lava lamp (look them up kids, they were awesome). Mesmerizing swirls of sparkle are fun to look at and all – but GLITTER. Hello. Fabulous. Except when it burns the crap out of your skin.

The Consumer Products Safety Commission issued a recall for more than a quarter-million MixBin cases. These include cases that were sold between October 2015 -to- June 2017  from Amazon, Henri Bendel, Nordstorm Rack, Tory Burch, and Victoria’s Secret stores. The cases cost between $15 and $65. The CPSC said they known of 24-reports of the cases causing burns. 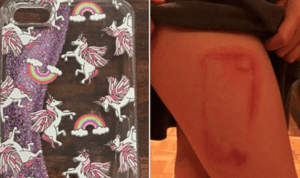 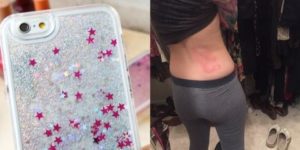 Here’s what those burns look like, according to a few Facebook posts (and verified via Snopes). The liquid inside the cases apparently leaked onto people’s skin, causing acid-like burns and reactions. Um. That’s not good.

If you have one of the recalled cases, contact MixBin for a refund.