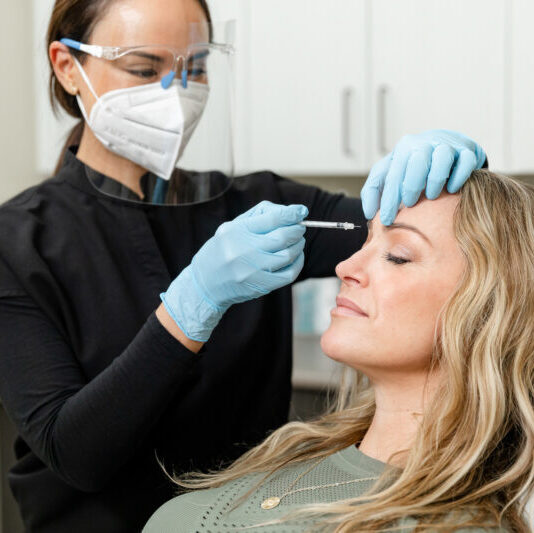 After staring at our own faces on Zoom calls for what seems like the past bajillion years, there’s a major boom in high-tech beauty “tweakments.” That’s the latest term used to describe non-surgical cosmetic fixes for crow’s feet, worry lines, double chins, “tired-looking” skin, and even the dreaded resting “bored” face (to use the rated “G” definition).

“The Zoom boom is a real phenomenon,” SkinSpirit CEO and Co-Founder Lynn Heublein tells me – over yet another video call – from her home in the Silicon Valley. “Our company revenue has doubled year over year. We’ve opened new locations and have seen a steady stream in pent-up demand,” she adds.

But Heublein and others in the now-$30 billion medical spa industry don’t think the pandemic – or it’s “wait, does my nose really look like that?!” Zoom calls – is the only reason for the surge. Instead, they say it signals a much bigger shift, with new technology and next-generation ideas about self-care at its core.

“Sure, people are impacted by looking at themselves more online,” Heublein explains. “But I think the demand we’re seeing now isn’t just the result of an increase in FaceTime, but rather a bigger change as a society. We are embracing self-care in a much bigger way than ever before and we’re normalizing taking better care of ourselves and that includes putting our best face forward.”

What’s tech have to do with it?

SkinSpirit’s flagship “next-generation medical spa,” is in Palo Alto, California, not too far from the headquarters of Apple, Google, Hewlett-Packard, Facebook and Tesla, among others.

While the area’s given rise to all kinds of science-fiction-y notions around “hacking” aging” and millionaire moguls line up to bet billions on new tech promising to turn back time, SkinSpirit is considered one of the most successful startups to date in the budding “aesthetics meets technology and science” industry.

In the same amount time it took the now-infamous Silicon Valley biotech company Theranos to burn through more than $700 million in venture capital and go from a $10 billion valuation to ruin playing out in a courtroom, SkinSpirit has grown to nearly 20 locations including San Francisco, Austin, New York City and Seattle.

“We’ve always operated like a start-up,” Heublein explains. She says she and her business partner, Stanford-trained plastic surgeon Dr. M Dean Vistnes, “believe in quality over quantity. We merge cutting-edge technology with proven science, stringent testing and training and attention to every detail. We’re not betting on what might be, we’re raising the standard on what is,” she reiterated.

A PR representative for SkinSpirit emailed me about the changing face of beauty technology, around the time I turned 50 earlier this year. It was also the same time I noticed targeted advertising in my social media feeds shifting from cool things like Zip Lining in New Zealand or designing my own custom Nike’s, to ads for – no exaggeration – fixes to “loose, crepey skin, saggy jowls and belly fat.”

Let me step back for a second and say this: I feel fine about the way I look. I’ve earned the smile lines around my eyes and wispy grays at my temples. I’m an ultra-marathoner with several 50K’s now under my belt. In other words, I saw the shift in ads for what it was – a really lame idea of who and what 50-year old women are about in this day and age – and it really didn’t bother me.

But it did make me wonder about the role of modern technology and the way it’s messing with our minds, whether from too many poorly-lit Zoom calls, comparing ourselves to app-enhanced ‘influencers’ on social media, or ill-targeted ads from the multi-billion dollar beauty industry.

If the latest technology can get William Shatner to outer space for fun, can it actually take “10 years” off our appearance? Do we really want it to?

The foundation for next-gen beauty

“Hell yes it can,” enthuses Lynn Bartels, a UCLA-educated medical pro and SkinSpirit’s wildly popular aesthetic nurse practitioner. “But making you ‘look younger,’ is such a small part of this picture. Our goal here is empowerment. It’s about understanding your ‘why.’”

Bartels is equal parts educator, life-coach and girlfriend-guru, who at 60, is a model for these latest “tweakments,” that leave you looking refreshed and natural.

According to an article in W Magazine, Bartels ranks among the country’s top 1% tier of injectors. But she leads with skincare and says the latest technological and scientific advances start there.

“If you take good care of your skin, fairly consistently, using just a couple of medical grade skincare products, over your lifetime, that alone can help increase reflective light, smooth out some fine lines and prevent harsh signs of aging on your face.”

When I admitted to Bartels that I’ve always thought you can find the same quality of skincare at a drugstore for a whole lot less money, she asked me to try a few samples of products from Alastin and SkinMedica.

Bartels explained these products “leverage your skin’s natural healing properties and help rebuild and replenish collagen production that slows over time and causes skin to become thinner or show signs of aging.” They also cost a small fortune, I pointed out.

“Honestly, how much have you spent on skincare products that don’t work? Just try this,” she said.

What I didn’t tell Bartels at the time was that I’ve always had good skin, which is in no part due to anything I have – or have not – done. It’s genetic. But other people have noticed it, too. For instance, a casting agent saw me covering a story when I was a full-time TV news reporter and put me in a national Dove “campaign for real beauty” commercial. There was another national commercial for Lancôme after that, too.

But since my mid-30’s, I’ve had rosacea flare-ups. The annoying red bumps are common among women over 30, yet more than a dozen trips to dermatologists – and all the expensive creams and medications they prescribed – never got rid of it. Somewhere along the way, I gave up and decided not to worry about it. Don’t get me wrong, I’m as vain as the next gal, I’m just too busy to put much thought into it.

Within a week of using a “rosacea combo-gel” that a dermatologist at SkinSpirit prescribed, along with the samples Bartels provided, my skin looked better than it had in quite a while. Within a month it looked better than it has in years. The rosacea is totally gone. I look more rested. My skin is actually “glowey.” When I told Bartels all of this, she was not at all surprised.

“We have the most cutting-edge lasers and high-tech gadgets now, but first  we need to understand who you are in life: personally, professionally, socially. We can now create looks that are subtle and natural and enhance your natural beauty. We match your vision and what you’re trying to accomplish, and we do now with (science and new tech) what we used to do with plastic surgery or (thousands of dollars of) makeup.”

At the intersection of high tech and natural beauty

“There is a movement toward less of an unrealistic standard of beauty and more of a desire for a natural appearance and ‘healthy’ is the new beauty,” Dr. Nathan Gunn, a University of California San Francisco-trained internist-turned-Silicon Valley health-tech entrepreneur told me over the phone.

Dr. Gunn’s latest startup, Docent, connects people – mainly women, ages 30+ – to licensed dermatologists who can prescribe customized, medical-grade skincare treatments for a fraction of the time and cost it normally takes. It’s only available in California for now but could soon expand to other parts of the country.

He agrees that the pandemic fueled demand in high tech beauty “tweakments,” but like SkinSpirit’s Heublein, thinks this is just the beginning of a bigger shift, where technology can better bridge a gap to “increase quality and decrease cost,” for people seeking treatments such as healthier skin.

“I believe in the transformative power of technology to increase access to healthcare and bring more integrity and ethics to the ($415 billion cosmetics) industry in the U.S,” he added.

The next time I saw Bartels four months after the original meeting, she asked if I was ready for the next level of “glow up.” It included a small and conservative “sprinkle” of Botox across my forehead that Bartels referred to as “babytox.” She also talked with me about adding “a touch of filler in a few strategic places around my nose and cheek bones, to create “a softer, smoother, more rested and contoured look,” if I was up for it.

I admitted that I was afraid of fillers and had images of women with lips so overfilled it was a surprise they didn’t quack when they said hello. No matter what, I told her, I want to look like myself. Thirty minutes and a few needle-pokes later that didn’t feel all that different from acupuncture I’ve had in the past and I was on my way – and back to not thinking much about my skin or appearance.

But three weeks after that visit, I texted Bartels a photo without any makeup. “Wow,” I wrote to her, “I look amazing.” I told Bartels that a makeup artist on a recent TV appearance in New York commented on it, too. For the first time in nearly 20 years, I remembered that I once had the kind of skin people stop me on the street to ask me about.

Bartels texted back, “This is how our work has really evolved and advanced. Our clients are beautiful, and my job is to help them see that, too, whether it’s helping them get more glowing skin, or bring a little light back to their eyes. I’m so glad you feel more like yourself again.”