Do we really need an Alexa-powered toilet?

Kitchen and bath products-maker Kohler thinks so, as well as a faucet and bathroom mirror and the list of Alexa-activated devices is even longer and weirder than that. How about an Alexa-powered dog collar or backyard umbrella?

Amazon was expected to get its voice-activated digital assistant into all manner of Internet-connected gadgets at CES 2018, the big annual technology trade show that wrapped up in Las Vegas last week. And it didn’t disappoint. The list of new devices powered by Alexa rose to 4,000, from over 1,000 brands. Not to be outdone, Google made an unusual splash, showing off deals that put its Alexa rival, Google Assistant, in touchscreen displays and voice-activated commands in cars.

Technology fads often run hot then fizzle, and it’s tempting to think that the Numi intelligent Wi-Fi-connected Kohler commode will fall into the realm of cool-but-little-used items that include smart forks and see-through washing machines.

But in this race for the crown jewel of smart home control, Kohler’s toilet might just take the throne. You can ask it to heat up the seat, lift the lid, play your favorite tunes, and of course, flush. “Numi delivers hands-free control, personalized cleansing functionality,” reads the release, “that let users fine-tune every aspect of their experience to their exact preferences.”

The smart toilet starts at $5,625, while the fancier Numi Black will set you back $6,500. Both come out in the fourth quarter this year. 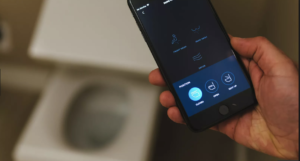 Now before you make it the butt of new gadget jokes, just imagine how great it would be to end the age-old argument between men and women everywhere to put the seat down. And talk about ending germaphobes’  complaints forever. As much as I want to mock it, I would buy it in a heartbeat — if I won the lottery. And it’s far from the only wacky voice-controlled gadget I saw this week.

LG’s InstaView ThinQ Internet-connected refrigerator will let you ask Alexa to order groceries, while commanding the new robot CordZero R9 vacuum to clean up whatever you just spilled on the floor. 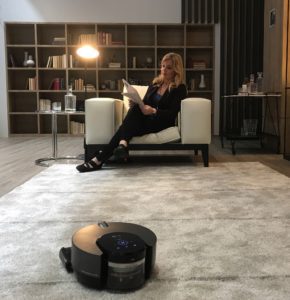 Pets are getting in on the trend, too. The Wagz Smart Dog Collar ($295) will soon let you say, “Alexa fluffy needs some food,” to restock its smart feeder ($250), and even open its Wi-Fi connected dog door ($250). All three of those gadgets are expected out in May this year.

Then, there’s the $8,000 robot ShadeCraft Sunflower outdoor robotic parasol, that you’ll be able to ask Alexa to play your favorite summer jams, or move a bit to the right. It also acts as a security camera, and can serve as a Wi-Fi hotspot.

As over the top some of these sound, they also make sense in a way.  Amazon’s Echo and Google Home have been such big hits, tech makers envision a future where our voices are like remote-controls for our homes, which might be soon be considered our biggest gadget. Or like one big robot servant, wired and waiting to make our every wish its command.

At the very least, it’s safe to say, the future’s flush with tech possibilities.