One of the biggest tech news stories this week: You can get your hands on Snapchat’s Spectacles without getting off the couch. So I did. I went straight to Spectacles.com, picked out the red pair, paid my $129.99, and bragged about it on social media. Er, now what?

I think I’m pretty hip, though my teenage daughter disagrees, but do I really need a pair of slightly clunky sunglasses that shoot 10-seconds of video at a time? 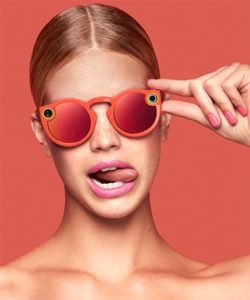 I just asked my 22-year old “social media manager” Maya this very question and she said, “you need them because they’ll make you look really, really cool and everyone will want to be you.”

That’s something I guess.

Then she went on to tell me that I can take video and photos of myself skateboarding, parachuting, and even hang-gliding hands free. (Because I do all of those things so often…?)

Sure, they were the must-have gadget when they launched in November. I’ve seen plenty of tech’s coolest kids sporting them at CES2017, around San Francisco and I’ve even read most of my colleagues reviews.

And sure, there are nearly 160 million people who use Snapchat every day. But I’m not one of them, mainly because I’m too busy doing lots of other things and honestly I’ve never quite figured out how the damn thing works.

So – while I am not the obvious target market for these goofy-goggles, I can’t wait to see what they have in store for a tech-loving mom like me. 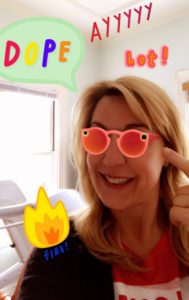 In the meantime – Read Recode’s story here about Snap creating a “How to Use Snapchat video for Wall Street,” and take a look at TechRepublic’s awesome cheatsheet on what they are and why they matter.

From the outside Snap Inc.’s Spectacles look like a pair of sunglasses, albeit with a couple of brightly colored circles at the base of the arms. Those somewhat jarring circles are what makes Spectacles the latest in wearable tech: LEDs, a camera, a microphone, and all the stuff needed to power them.

Why do Spectacles matter?

It’s simple to dismiss Spectacles as a tech toy that will get limited use before being forgotten in a desk drawer. While that’s definitely the case for plenty of pairs that doesn’t mean they don’t have their place.

Promotional shots of Spectacles in use by sports teams and other organizations show off the perfect use: First-person perspectives of product demos, events, and even a behind-the-scenes look at daily operations.

Beyond being a great way to reach more customers on social media, Spectacles are also a preview of the future of wearable tech. Yes, the limitations on them (being locked into Snapchat and only taking 10-second videos) force them into a very small niche, but similar products are likely to come out in the future that look and feel like Spectacles with an added openness.

Like it or not, the kind of instant media that Spectacles allow the average person to create is the new norm. The quicker an organization learns to take advantage of this new form of content creation the better off it will be.

***Have you bought Snapchat Spectacles? Are you using them? Be sure to share your own experiences with us @TechishHQ!***