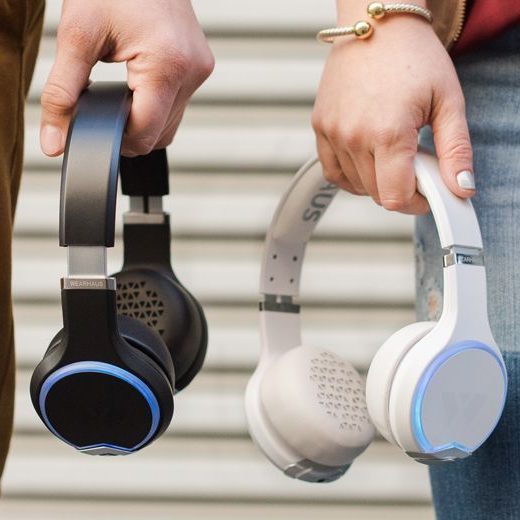 Sharing a song with someone is easy if you’re cruising in your car, but if you’re in any kind of a public setting, rocking out to Spotify on your phone is a sure fire way to annoy the heck out of everyone within earshot. Now there’s a pair of headphones that actually solves the problem of shared listening in public.

The Arc headphones by Wearhaus are completely wireless and sync with your iPhone, Android device, or laptop, and they sound great. They’ve got this funky light ring on the earcups that you can customize via the Wearhaus app, and the outside of the right earcup has a touch panel that controls volume and lets you pause, resume, or skip songs.

Those features on their own would make the headphones a great buy, but their best trick is letting you sync your music with a friend — or your special someone — and rock out to the same song at the same time. Using the Wearhaus app you can pair your headphones with another Arc and stream music simultaneously.

They’re powerful, eye-catching, and just plain awesome. Wearhaus is even running a deal that lets you snag two Arc headphones for $100 off the bundle price, bringing the price for two to $300, which is cheaper than a single pair of some other wireless headphones. Not a bad deal, especially if you’re going to be listening as a couple!