Battery drain issues never seem to go away. You get a new smartphone, it seems awesome for a little while, and then before you know it you’re back to barely making it through the day before it sputters to a stop.

It’s an issue I’ve had with my last three iPhones, and I’ve gone to Apple for help many times. I did the typical troubleshooting — updated my phone, tweaked location settings and notifications, didn’t expose it to extreme ambient temperatures, and made sure my Wi-Fi was connected whenever possible — but none of the typical tricks fixed it. I was still dead in the water by two in the afternoon.

IS “BATTERYGATE” TO BLAME?

The drama surrounding Apple’s iPhone battery woes can be confusing, so let me simplify it: Your battery stores less and less power as it ages. This is not new. All lithium-ion smartphone batteries work this that way.

But in a software update, Apple tweaked the iPhone so that its processor uses less power as your battery ages — without telling anyone that’s what they were doing. With the processor using less energy, apps and other features may seem slower, but your battery should last longer.

When customers began to cry foul, Apple released an update to iOS that lets you decide whether you want an aging iPhone to use less processor power or not. You can find this new option under Settings > Battery > Battery Health. 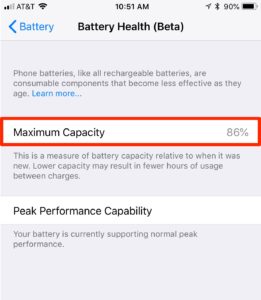 When you open the new Battery Health (still in Beta) feature your phone checks your battery’s capacity and tell you if it’s less than 100%.  My year old iPhone 7 Plus shows 86%. That’s not great, but the message just below that — Peak Performance Capability — says that the battery is still “supporting normal peak performance,” which means it should be a-okay.

If my phone, “experiences an unexpected shutdown,” which is Apple-speak for — it suddenly crashes —  Apple will then turn on that “performance management.” In other words, they’ll slow down the processor to spare battery life. If that happens, you’ll get a message saying, “Performance management has been applied to help prevent this from happening again,” followed by a link to disable it if you want.

Apple does a decent job of explaining all of this on its iPhone Battery and Performance support page, where they say you should replace the battery when maximum capacity dips below about 80%. You can get a new battery for an iPhone 6 or later at an Apple store for $29 through the end of 2018. Once you’ve replaced your battery, it should go back to working like new.

So your battery health is fine-ish, now what? Here’s a trick I first reported on last year: Your battery should only be doing its heavy lifting when you’re using your iPhone, and the rest of the time it should be relaxing in standby mode. Sometimes though, an app goes rogue, keeping your phone from going into standby and draining down your battery.

Here’s how to test it:

Go to Settings > Battery. Scroll all the way down to the bottom, and you’ll find two numbers, one for Standby and one for Usage. 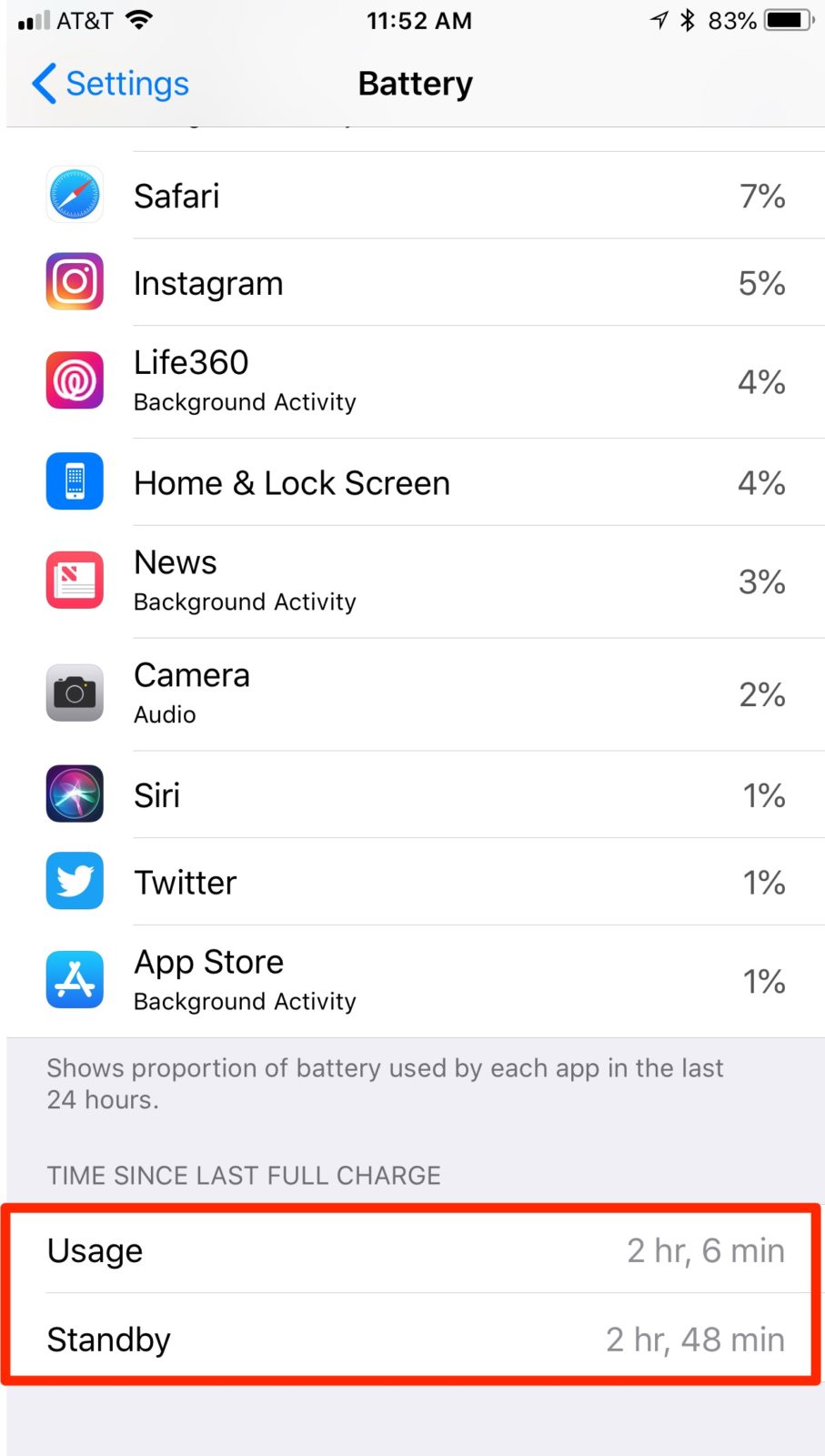 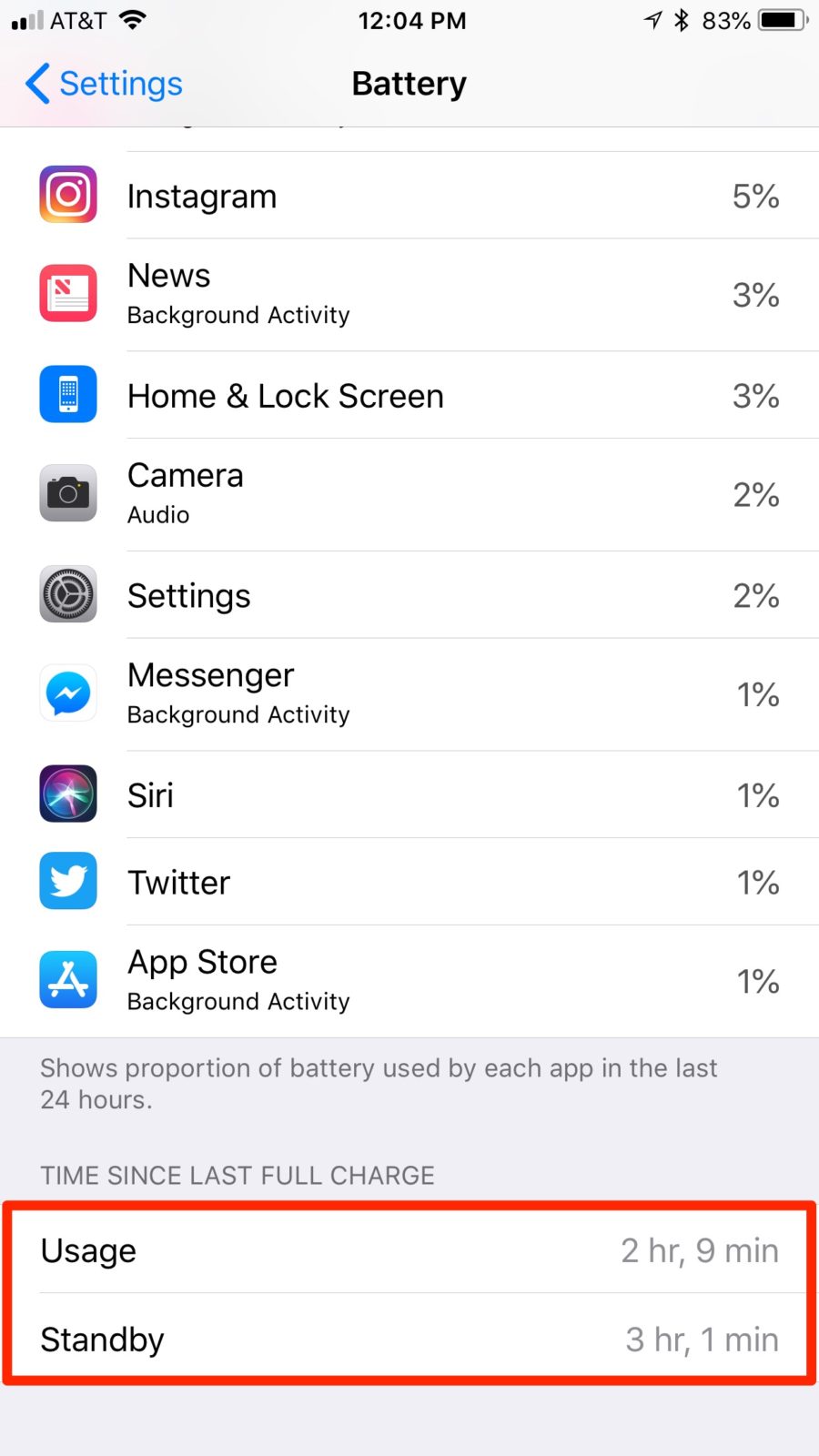 Your Usage number should be way, way lower than your Standby number. If it’s not, you might have a problem, and you can confirm it by jotting down your Standby and Usage times and then clicking the lock button on your phone. Let it sit for five to ten minutes and then recheck the numbers.

If your Standby time is five minutes higher, you’re in good shape, but if your Usage time has bumped up by a more than a minute, it’s a sign that your phone isn’t resting as it should.

I do this test every single time my phone starts dying early — which is about every three-four months. When it’s not “resting” when I’m not using it, there’s likely an apparent reason, which brings us to…

When an app is doing things even when you’re not using it, it could be malfunctioning and stuck in an endless loop that’s draining all your power. That’s what happened to me, with, of all things, one of the email accounts I had connected to my phone.

Rather than checking for new mail every once in a while, or whenever I opened the email app, my phone was always trying to find new emails that didn’t exist, and its endless searching was draining all my mobile power.

The fix was simple.

Go into Settings > Mail > Accounts> Fetch New Data. Mine was automatically set to Push, so I set it to Fetch every 15 to 30 minutes instead. You can also use the Manual mode, which only scans for new messages when you open the email app.

You can also tweak the push settings to fetch new emails only every hour or so, which is also a big help. You don’t sacrifice timely email updates either, though you’ll still save the most power by disabling push emails altogether.

On an Android phone, you can manage the push notification settings for any apps that use it by heading into Settings > Apps and then picking an app and tweaking its specific settings.

WHEN BACKGROUND APPS ARE THE KILLER

There are other times too when an app is running when you’re not using it, and that’s called “Background App Refresh.” There are lots of reasons apps update in the background, like the Music app fetching new playlists, Facebook updating your social feeds, and even Pokemon Go keeping an eye on your steps so you can hatch eggs. It’s all in the name of convenience, but it might also be leaving you with a dead battery halfway through the afternoon.

To check out which apps are eating up valuable power in the background go to Settings > Battery and you’ll see a list of the apps taking up your battery life, with the first app being the most significant power hog.

If you see an app listed with “Background Activity” below it, that’s when you know it’s using power even when you’re not using it. Facebook, Snapchat, Instagram, Twitter, and streaming apps like Apple Music can be real demons in this department, so head to your Settings > General > Background App Refresh page and toggle off any apps you don’t want working overtime to save some serious juice. 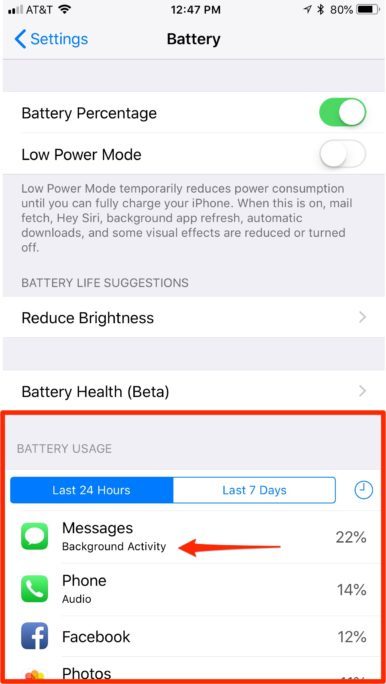 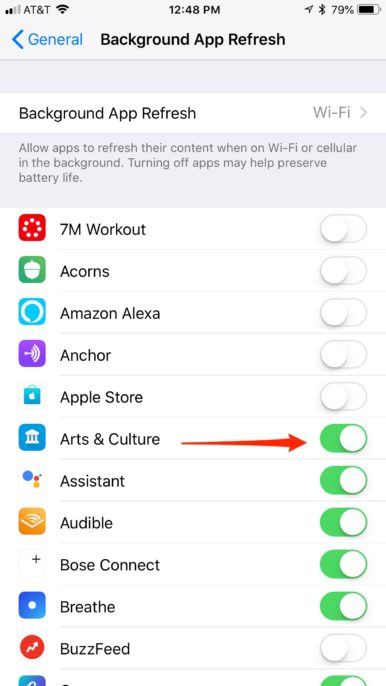 Do you ever double-tap your home button and see all the apps you have open? Whenever I do, I close them out of instinct to start fresh with a clean slate. (I just can’t think straight with all that clutter!) But in reality, this might hurt your battery life in the long run.

Just because you see an app sitting in the multitasking menu doesn’t mean it’s using your battery life at all — it’s just paused — sitting in the phone’s memory and not doing much of anything. When you close it, the phone shuts it down, but the next time you use it, it forces your phone to load all that data back up again, and that means it’s using valuable power and ticking down your reserves. Leave the apps alone, and you’ll be doing yourself and your battery a favor.

On Android, finding the apps by pulling the top menu bar down, which brings up a list of what’s running or paused. You can choose to close them, but again, the idea is that by leaving them open you’re saving more power, so it’s best just to let them be.

LOW-POWER MODE CAN ADD HOURS TO YOUR BATTERY LIFE

Android and iOS both come with low-power features that let you turn off almost all of your phone’s extra features anytime and save tons of energy throughout the day. You can turn it on when the battery drops to 20% or much earlier — by going to Settings > Battery > Low Power Mode and switching it on.

On Android, the battery saving feature kicks in automatically if you leave your settings as-is, but you can also manually turn it on by going to Settings > Battery then tap the menu icon and select “Battery Saver.”

It can be a real lifesaver, and it has the bonus benefit of preventing even more battery stress by depleting a dying battery even further than it already is.

The tips above should fix a lot of your battery woes, but there’s so much #fakenews floating around about smartphone batteries that you might be tempted to try all kinds of weird tricks and advice that doesn’t work. Here are a few myths I’ve come across that need to die a quick death:

Myth #1: Your battery should last forever – Unfortunately this is just isn’t the case. Nobody can make an old battery new again, and that’s because the lithium-ion technology used by most gadget batteries degrades over time. By the time you’ve hit between 300 and 500 full charge cycles, your battery will have degraded by about 80%. If your phone is old, it’s better to replace it than try to keep it on life-support.

Myth #2 Charge it whenever you want – If you don’t use your smartphone much, or upgrade every time a new model comes out, charge it whenever and however you want. But if you want it to be at it’s best the longest, “never run a battery to zero. That’s bad for it,” says Carl Howe former mobile analyst and Principal of Think Big Analytics. “The rule of thumb: To get your smartphone battery to last the longest, charge it to 80% and recharge it when it hits 20% to avoid stressing the system.”

Myth #3: Never let your phone die – You shouldn’t make it a daily habit, but if you want your battery to stretch its legs a bit every now and again, it’s okay to let it run a “full charge cycle,” or to let it die and then charge back up to 100% again. This helps the little computers that control the battery remember where its high and low points are, and will give you a more accurate reading of your charge. This isn’t a must-do, and repeatedly letting your phone die will have adverse long-term effects on the battery, but it can help keep your smartphone’s power gauges working as intended.