TECHLIST: Best Back to College Gadgets and Gear To Keep Them Safe and Healthy 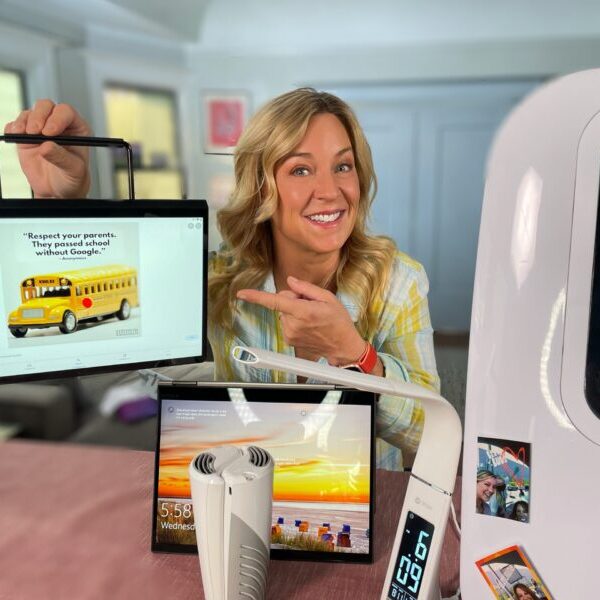 My daughter is one of the millions of American college students heading back to campus in person this fall. She was a freshman when COVID-19 hit and shut the world down, cutting short her first year living with two other young women in a cramped 10-by-20 dorm room decorated with string lights, Polaroid snapshots, and the occasional half-empty pizza box or two.

When she heads back this year, it’s to an apartment near campus as a junior, a full 18-months since she last set foot inside a lecture hall. While I would send her back in a full biohazard bubble suit if I could, here are the tech tools and gadgets we handpicked to keep her safe, healthy, and having as much fun as possible during an ongoing pandemic.

According to a University of Arizona study, the average desk has 400 times more bacteria than your toilet seat. Ew.

There’s a gaggle of new gadgets that promise to kill germs, including antimicrobial backpacks, keyboards and desk lamps. I’ve gone hands-on with several of them and chose the OttLite Thrive LED Sanitizing Desk Lamp (on sale for $70 at publication time). It uses a “visible light disinfection technology” that the company calls SpectraClean to break down bacteria, fungus and mold. The company also says it’s proven “safe for eyes and skin.” Another feature I appreciate is that it uses LED lighting promising to more closely mimic natural daylight and cut down on glare to help with eye strain.

I’m also sending the super-spendy AirKAVE portable antiviral air sanitizer along with her. Yes, it costs a small fortune at $300 for one or $500 for two. But it’s the only small, travel-mug-sized gadgets I’ve found proven to kill airborne SARS-COV-2 – the virus that causes COVID-19 – along with all kinds of other nasties like the flu, MRSA and E. coli. It doesn’t have any filters to replace and cleans a 100-foot radius around you. With the wildfire smoke that often plagues her UC University of California, Davis campus in the fall, I hope it’s an investment in her well-being for many years to come.

The other big health gadget here doesn’t come with a battery or charger, but it’s still somewhat high-tech. I first reviewed the Enro mask ($16.50) earlier this year. Of all the face coverings I’ve tried – more than 100 of them – Enro’s fits and feels the best, especially when working out. It has a built-in PM (particulate matter) filter with an antimicrobial coating that’s safe to wash 100 times. The masks recently rated No. 1 in several high-profile reviews, so many styles are sold out right now. The company says they are working around the clock to restock them by Aug. 19.

It’s also a great idea to send your college-bound student off with a fully stocked first-aid kit that includes a thermometer, several sizes of Band-Aids, and over-the-counter staples such as throat lozenges, Tylenol and Pepto-Bismol. Yes, they can buy it on their own, but it’s comforting to know it’s already there if/when they need it.

While a PC or laptop is the single most important gadget for students these days, my daughter’s 5-year-old 13-inch MacBook Air is perfectly fine to get her through essays, midterms and finals well into grad school. (Knock on wood.)

► Back-to-school shopping:  How to buy the right computer for students of any age

What’s new on our list this year though, is a sturdy second-screen for entertainment, gaming, reading and streaming the occasional lecture on the go. Usually, she watches movies and TV shows on her cracked iPhone 8. But after spending the past year going to college from her bedroom in our house while working three remote jobs, she’s more than earned a screen upgrade.

I just finished a month-long review of Lenovo’s new Yoga Tab 13 ($680). It might seem silly, but the kickstand that doubles as a sturdy hangar sealed the deal for us. It’s one of those “Why hasn’t anyone thought of this before?” moments, where a simple way to hang it on a wall, doorknob, back of an airplane seat, or anywhere else you can imagine, without an additional gadget – is just genius. It’s also coated in an anti-fingerprint finish and the high-performance battery lasts 12 hours and charges in minutes.

I still can’t get over the picture quality on these newest devices. The Tab 13 features stunning Dolby Vision 2K picture quality and additional eye-care protection that cuts out harmful levels of sleep-disturbing blue light.

College should be fun too and there are some incredible new gadgets to help them live their best lives, even in the middle of a pandemic. One of my dear friends just showed off one of the most dramatic dorm room makeovers I’ve seen yet on Instagram.

“Dropping off your college freshman is hard enough,” Bowcock told me, “so we wanted to make the transition as seamless as possible. We (my husband and I, plus Alexis’ roommate’s parents) turned our daughter’s room from drab to fab with a cute and comfortable setting, plus gave her the extra tech needed to survive the school year.”

She also said she would soon add a robot vacuum cleaner, which runs a little higher price tag, like this iLife ($180) model.

“Dorm life is full of Tik Tok-making moments, so we picked (gadgets) that make the backdrop more interesting that these students can quickly set them up themselves without calling home,” Bowcock added.

Speaking of TikTok, I splurged on this Arcade1Up WF Tastemakers Polaroid At-Home Instant Photo Booth ($350) because I thought my daughter would be as obsessed with it as I am. It went viral on TikTok recently, racking up more than 1.8 million likes.

You can hang it on a wall, door or prop it up on a tabletop, press a red button on the front, then strike a pose as a timer counts down – 3, 2, 1 – and snaps a selfie with a front-facing camera. You can then use the built-in filters, stickers and frames, or even write a message on the photo, press a button, and wait while it prints out at the bottom of the device. The pictures print on a small,  2- by 3-inch Polaroid photo paper. You can order it with a sticky back, which is a nice touch too.

I love it and think it’s a super novel idea. But it’s a try-it-first gadget. The photos are often dark, even when you hit the built-in light on the front. It needs an additional ring light to brighten up the image. You can only put about 12 pieces of photo paper in at a time, so you have to keep restocking it. And it would be so much better if it printed out a strip of photos like the old-fashioned photo booths do. Still, I predict this is a must-have splurge, especially for students this year.

Another gadget I can see being a big hit on campus is the soon-to-launch Tosy’s Flying Duo (price TBD). The company told me that I’m the first journalist to be hands-on with them and think it’s a fun way to get students outside and playing as a socially distanced team in a campus fave like Ultimate frisbee.

Two separate gadgets come in the package: a dinner-plate-shaped LED light-up boomerang and an LED flying disc. The lights make it extra fun to play in the dark and both Tosy’s can sail as far as 100 feet away and soar up to 50 feet high. Another notable feature includes an onboard timer, so after you hold the frisbee for 10 seconds – the time limit in Ultimate frisbee – it lights up, making it much easier to stick to the rules. These go on sale via Kickstarter on Aug. 26 and are expected to hit store shelves later this fall. One more note: I pronounced it “Toss-ees,” but I think the company says, “Toe-zzz’s,” maybe they’ll change the name after reading this.

There are many other tech tools and apps you might not find on a college checklist that we recommend throughout our back-to-school coverage both here at USA TODAY and on our sister site, Reviewed.com. These include impenetrable bike locks, the latest location-sharing and panic-button gadgets, a subscription for stress relief and a sweet reminder to call home every chance they get.

Let’s be real: My daughter’s transition back to college will be harder on me – I’m not ready to be an empty nester! – than her. But everyone has to grow up and get on with their lives. Even me.