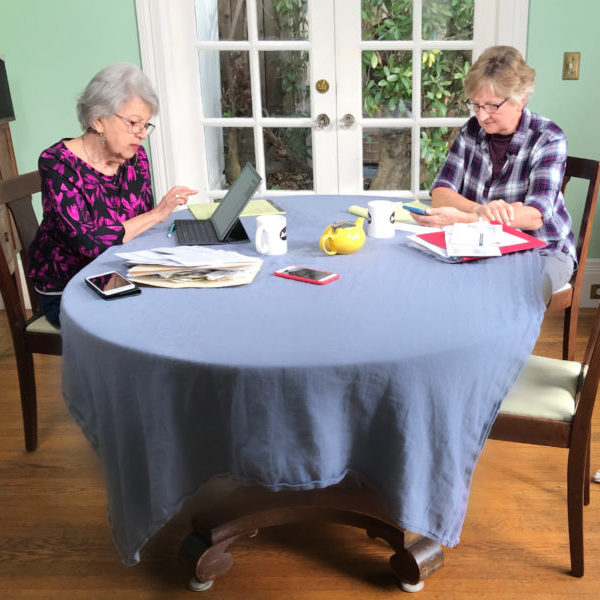 My senior citizen age mom and mother-in-law just filed their taxes for the first time ever straight from their mobile devices. That’s a pretty big deal, not just because it saved them both a good deal of money, but before now, they had no idea that it was even possible.

“I really was not comfortable when you asked us to do this – not comfortable at all,” my mother-in-law Odette Blelloch admits, adding that the seemingly daunting task seemed like “a nightmare” at first.

“What if I make a mistake,” my mom, Gypsy Jolly (yes, that’s her real name) asked?  “I’m pretty comfortable using technology usually, but what if I push the wrong button and lose everything? I don’t know if this is a good idea.” 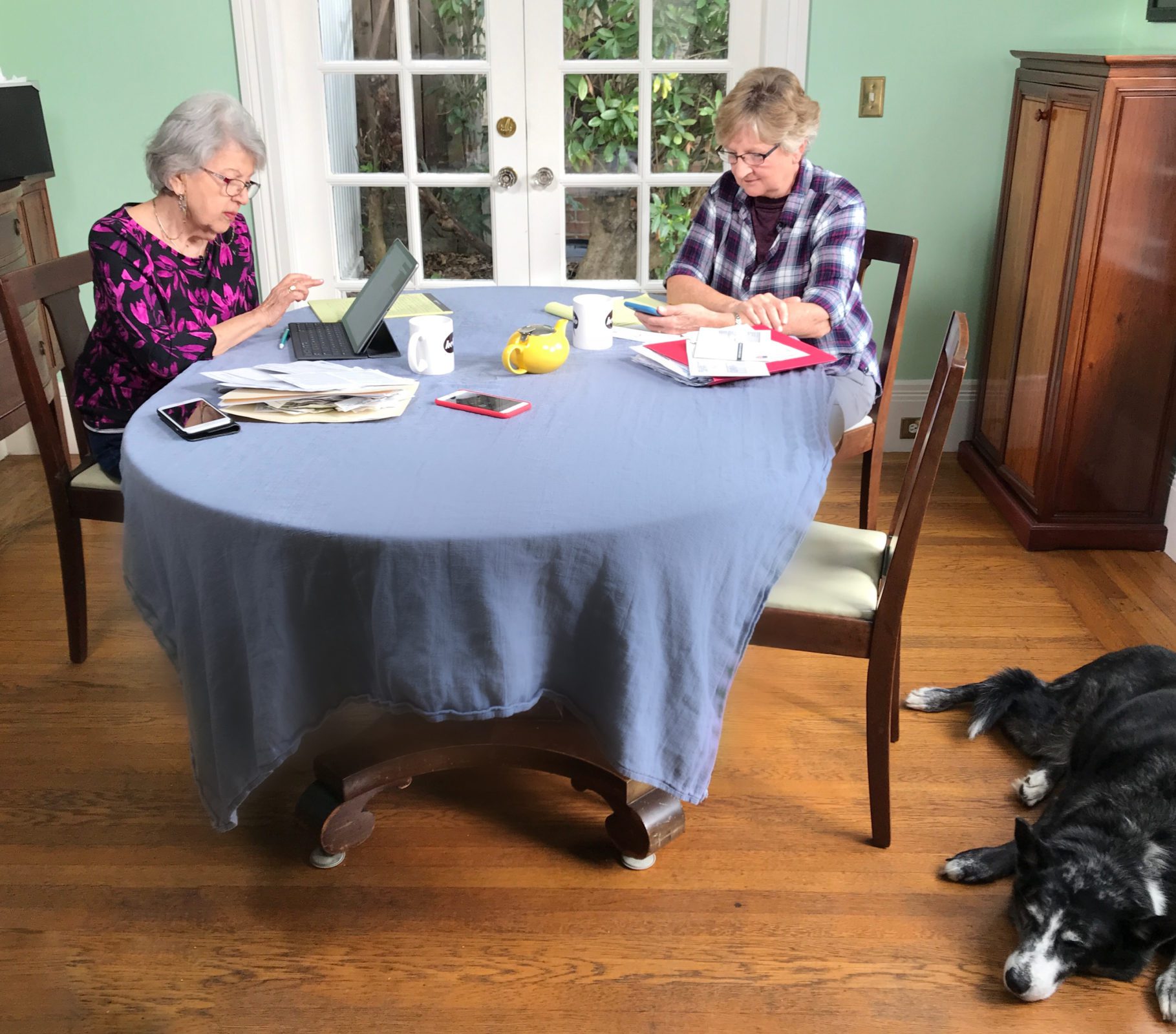 According to IRS figures, more 126 million U.S. tax filers e-filed their own tax returns in 2018 (for the 2017 tax year). That represented 92% of all tax returns filed in the U.S., compared to just 31% in 2001. And while smartphones might be permanently attached to the palms of millennials, a recent survey by Pew Research Center shows cell phone ownership is growing the fastest for seniors in the 65+ bracket. That means more and more tech service providers are now looking to the senior set for the next big boom.

While new tech tools and seniors don’t always mix, we decided to see if it was even possible to get these two seasoned tax veterans to file their returns using little more than their thumbs.

To give them the best chance of success, I showed them a few options from the most well-known tax prep and file brands including H&R Block, TaxAct, TaxSlayer, and TurboTax. All four offer web-based products, as well as mobile apps. Both moms chose TurboTax Live because it’s the one they’re most familiar with, and they can connect in real time to a Certified Public Account (CPA), Enrolled Agent (EA), or Practicing Attorney for personalized tax advice and answers and a one-on-one review of their returns. 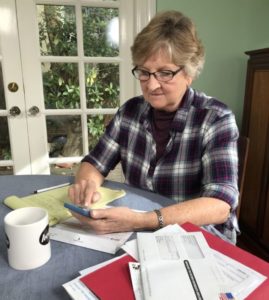 My mom downloaded the TurboTax Live app on her iPhone 8 Plus, signed-up, and then followed the app’s prompts for her basic information. Still retired? Check. Married filing jointly? Check. No other dependents living with you? Check. “It walked me right through the whole thing really. It was really easy,” she told us, still sounding more surprised than anything else.

The only major question she had was around the new tax laws this year, and whether to itemize deductions for things like medical expenses, new glasses, and donations or take the standard deductions.

For that, she tapped the app and went straight into a one-way video call with Washington State-based CPA Miguel Burgos, “So Gypsy, all your information remains confidential,” Burgos told her. “You can see me, but I can’t see you. I also can’t see your date-of-birth, social security number, or anything like that, so you are safe.” That immediately put my mom at ease, “Oh, I like that,” she said. “Most of us don’t trust new [tech tools]. especially with all the news is all about people taking advantage of seniors.”

She asked Burgos about the tax changes this year and switched from itemized to standardized deductions based on the new laws. She also had Burgos check her work, to make sure she  “didn’t do anything wrong.”

She breezed through the entire thing, and in less than an hour total, her forms were prepared and showed that she’s getting a refund this year. Her total cost was just under $90. That’s a $610 savings from her normal face-to-face tax preparer. “And I got to do them from your house,” she exclaimed. Typically she and my father file for an extension and do their taxes later in the year when they return to their home in Alaska.

Then, it was Odette’s turn. She too was visiting us from out of state, and of the two, she admits, “I am not so good with the gadgets. I am not at all savvy with any of this technology.” To make matters a little more complicated, my father-in-law, Odette’s husband of more than fifty years, recently passed away, and this is the first year she’s facing filing alone.

Using her iPad Pro, Odette logged to the TurboTax Live website and answered as many of the preliminary questions as she could. Since she had just watched my mom’s experience with getting a live CPA on a video call she didn’t want to mess around. “Call Miguel back,” she commanded (in a way only a 5’2 Chilean mother-in-law can). Normally you can’t pick and choose a specific person to work with on-demand, but because we are doing this experiment as part of a news story, the company had worked it all out with Burgos beforehand, and within a few minutes, he appeared on Odette’s video screen.

“My questions are going to be big because I just became a widow,” Odette said, “and I think that [might make] a big difference this year.”

“First of all, I’m so sorry for your loss Odette,” Burgos responded. “I can definitely help you and make sure you file the right away. I’m going to be here with you through this whole process, okay? Now I have a few questions for you. Take as much time as you need to answer. When did you your spouse pass away?” “November the third,” she replied.

Given that her husband died later in the calendar year, Burgos explains, Odette can still file jointly for 2018. Odette’s jaw dropped at this news and she seemed instantly relieved.

Burgos then walked her through every single step, including all of her deductions, one screen instruction at a time, “do you see the square I’m highlighting at the top of the screen? Tap that one,” he patiently instructed.

Then, came another complicated part of Odette’s filing online. “Miguel, hablas español? ¿Puedo hacer preguntas en español?” [Do you speak Spanish? Can I ask my questions in Spanish?] she asked. Odette is originally from Chile, and while she’s totally fluent in English, she prefers to work with a tax preparer who speaks Spanish. “When it comes to something sensitive, especially talking about money, I can express myself better in my native language,” she explained. 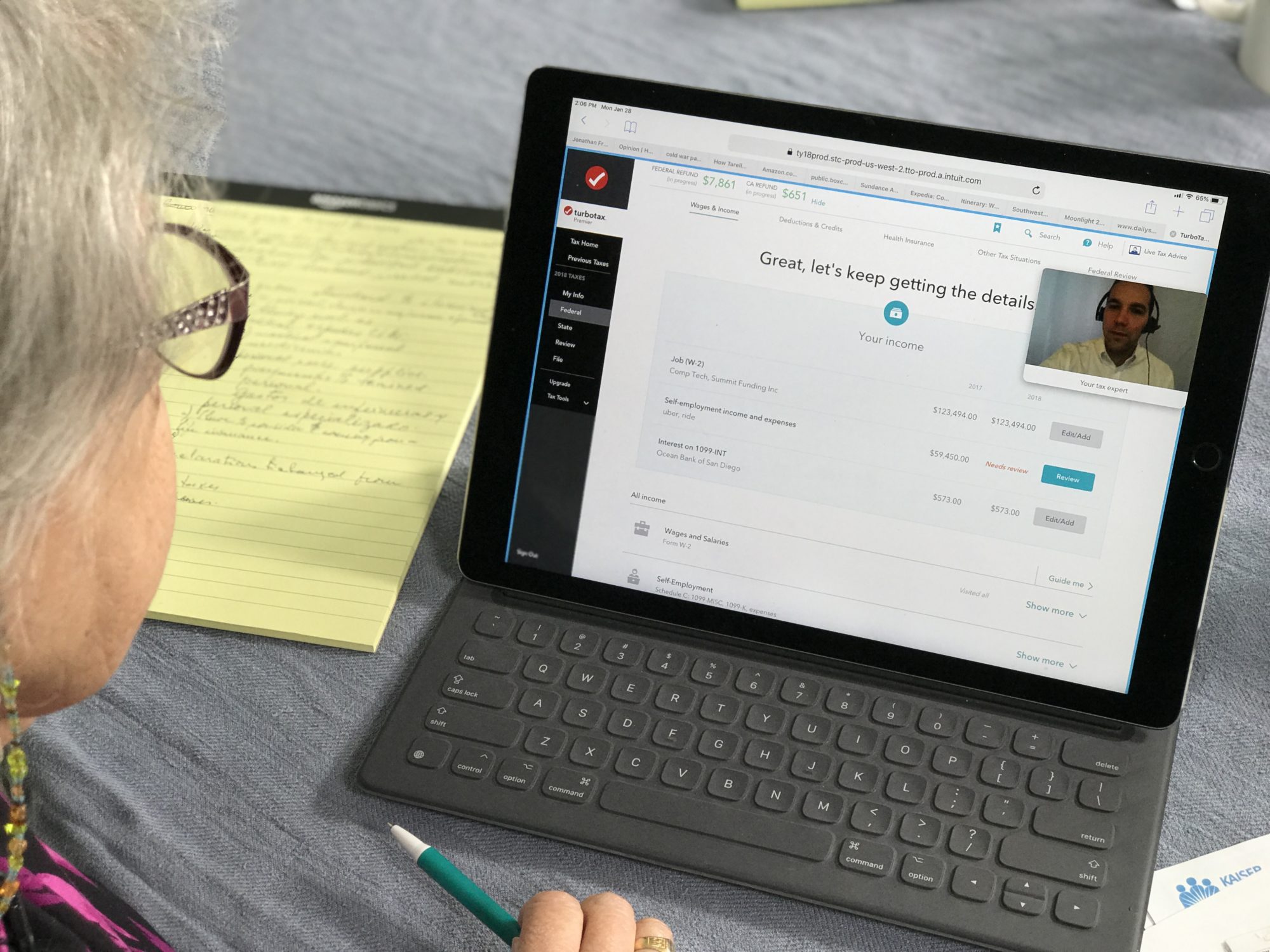 Less than an hour later, with all of her questions answered in both English and Spanish, Odette also found out that she’s due a refund this year too. She also saved more than $600 filing from a mobile device. “It was so nice not to hunt through papers in my house and drive to [the tax shop]. That usually takes me an entire week [to do my taxes]. This was so easy. Just click, click, click, they tell you what to touch, and seeing the picture of the person I was giving this information. I felt more secure. We’re constantly feeling vulnerable,” Odette said.

WOULD WE RECOMMEND IT?

Tax time is confusing for everyone, and 2019 might be the wackiest year in a while. Still, going through tax tools to prepare and file with both grandma’s online was a lot less painful — especially for me helping out — than we all expected. We all see a great deal of value for seniors getting to do something as dreadful as filing taxes, from the safety and comfort of their own home.

The biggest caveat is their online safety. I was glad that I was able to be there in-person to reassure them that the information, such as social security numbers, and financial forms were okay to share with this particular tech tool while reminding them that it’s good to be skeptical. I told them both, for the umpteenth time, not to ever give out their sensitive information to anyone who might call, text, or email them asking for it, or click on any link in any email, even if it was supposedly from their bank, tax tool, or even a tax preparer. I made sure they both knew to call me or my husband anytime day or night rather than risk clicking on anything that might expose them to a scam. There are several websites that can help specifically with online safety tips for seniors too.

Tackling taxes is daunting, and with fast-changing tax laws mixing things up from year to year, it can feel darn near impossible to keep things straight. Tech tools can make things a lot easier, whatever your age.