Videos, What to buy

MAY THE FOURTH: Star Wars: Jedi Challenges Gets Dual Play! 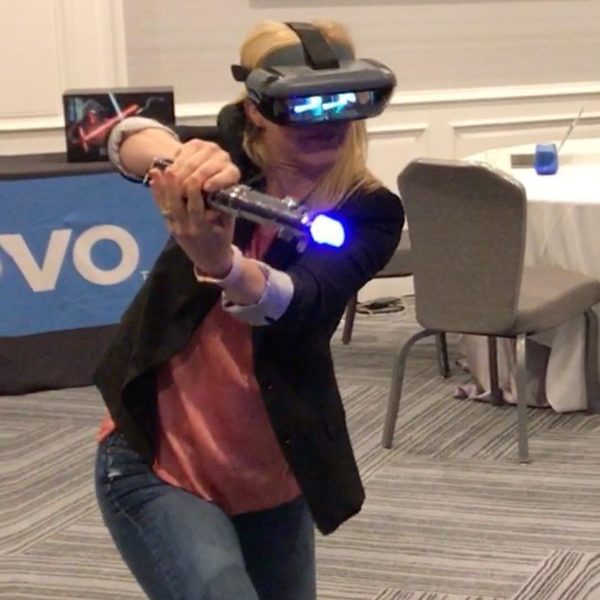 I’m 47 going on 12. My favorite AR experience of the year just got soooo much better.

Everyone wants to be a Jedi, but dreaming of wielding a lightsaber in an epic battle used to require a really good imagination. Not anymore, thanks to Star Wars: Jedi Challenges, the awesome augmented reality bundle for Lenovo’s AR headset. The package launched late last year and has been getting awesome updates along the way. Now, to celebrate “Star Wars Day” — May the 4th be with you! — the app is getting a huge addition: one-vs-one lightsaber duels.

Check out the official below this clip of me trying it out: (I’m awful, but man oh man, it’s a freaking blast!!! And a serious workout too!)

The rollout of this free update, titled Lightsaber Versus Mode, will be available for download on the App Store and Google Play. The new update lets you duel in augmented reality lightsaber battles while in the same room as another player with a headset and the app. It was one of the most requested additional features when the product launched, and now it’s finally here. The app is available on both iOS and Android.

When you’re playing the mode — both players have to be on the same Wi-Fi connection for it to work — each player gets little visual prompts to tell them when to block or strike. The action keeps getting faster and more intense until one player finally emerges victorious. It’s pretty fast-paced, and can even be a bit of a workout if you really get into it.

Star Wars: Jedi Challenges has a whole bunch of other modes that let you do things like fight again training bots and take on virtual enemies as they try to take you out, but nothing really compares to facing off against another real-life player. The app is free to download, and this new update is a great little treat to help you celebrate Star Wars Day in style.