“I’m not an entertainment reporter,” I warn actor Jeremy Piven when we meet across the bar inside San Francisco’s swanky faux-speakeasy Bourbon and Branch on a sunny afternoon in late September. “This is a story about tech.”
“Well, that’s a relief,” the 52-year old actor quips back with an ‘I’m game’ half-grin and smiling eyes, “I’ve spent my whole life dedicated to my craft, but sure, let’s talk about technology instead.”And for the next forty minutes straight, that’s exactly what we do. While Piven is billed as the lead of the new tech-centric CBS drama Wisdom of the Crowd, a fictional computer application called “Sophe” actually plays the starring role.

The Sophe app is a not-so-far-reaching crowdsourcing crime fighter. The idea behind it? If the old saying, “two heads are better than one” rings true, then imagine what the combined wits of some 325 million people can do. Especially when it comes to catching a killer.

“As you can imagine, it’s complicated,” Piven explains. “My character, Jeffery Tanner, is a tech genius who is completely broken. His daughter is murdered and he thinks they [put the wrong guy in prison for it]. He needs to find the real killer and that’s his whole world. So he devises, along with his cohorts, a crowdsourcing, crime-solving platform to figure out who killed his daughter.” 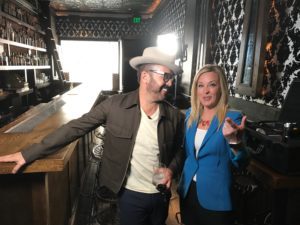 Sophe is kind of like a digital America’s Most Wanted on steroids. But rather than a weekly show telling people who to watch out for, it’s a constantly-updating hub where anyone with an internet connection can submit and dissect evidence. Or converge on a suspected killer, livestreaming their every move in a creepy new kind of flash mob.

“It’s a totally dangerous idea,” Piven adds. “It’s kind of like this Frankenstein monster — solving, exploring, heightening itself — what can and can’t it do? We’re in some interesting territory and I think that’s a brilliant fertile premise for any show because that can lead to bad behavior and vigilantism.”

The crazy thing? The app — loaded with concerns of privacy loss, vigilante justice, a mob-mentality, and a penchant for putting people in harm’s way — isn’t all that far-fetched. In fact, much of it already exists today.

Citizen uses your phone’s location to show nearby crimes on map, and send you emergency notifications in real-time. It also lets you livestream video “or share information about incidents via chat, in an effort to promote community transparency,” according to the app website.

A previous version of the app was called Vigilante. When it first launched in New York in October of 2016, the company introduced it on a Medium post as, “…a new technology that opens up the 911 system. This information shows up on a map, so everyone can choose to avoid potential danger, or broadcast the incident live when it’s safe to do so.”

Apple pulled the app down shortly after the launch, which some people said was due to criticism that it could promote vigilante behavior and put users in harm’s way. When it relaunched in New York in March of this year, with the new name “Citizen,” the company wrote another Medium post, with a renewed promise to “reinforce our focus on safety.”

“More apps like Citizen are probably inevitable,” Joseph Jerome, Policy Counsel with the Center for Democracy & Technology wrote to me in an email exchange last week. “Policing in the United State is an incredibly complicated, contentious, and resource-intensive issue. If Citizen really is about the public interest mission it claims, it will need to work to create a culture that isn’t exploitative or irresponsible.”

Using the public to sift through digital evidence in a responsible and helpful way has happened here in the real world. Jalopnik, an automotive news site, regularly asks its readers to draw upon their combined knowledge and expertise to identify vehicles suspected of being involved in crimes. More often than not, it works, and law enforcement has publicly thanked the site and its readers for help in nabbing criminals.

There’s also Nextdoor, the private social network for neighborhoods that I’ve been using for years, mainly to help track down my missing cat or find a new home for an old couch. But it’s also warned me of muggings in the area, a rash of car break-ins, and helped track down a person stealing packages off people’s porches. Over the years though, the company has dealt with a host of issues around around racial profiling and annoying hypervigilance bordering on very un-neighborly-like hysteria.

“Crowdsourcing has value, but mob mentalities are tough to square with the rule of law,” Jerome adds.  “We cannot discount the damage any single false positive could cause when it comes to criminal accusations. And those false positives have happened. The wrong bad guy is identified on Twitter, harassed endlessly, and has limited redress.”

That scenario — of app users targeting and beating to a pulp —  the wrong guy happens in the Wisdom of the Crowd pilot. Something similar also happened in real life too.

In April of 2013, shortly after the tragic bombing of the Boston Marathon, the news discussion site Reddit saw a vigilante attitude flare up amongst its users, who misidentified a potential suspect and caused incredible grief for his friends and family. The crowd’s wisdom — or lack thereof — was misguided, and Reddit was forced to apologize and form a policy on “witch-hunts.” 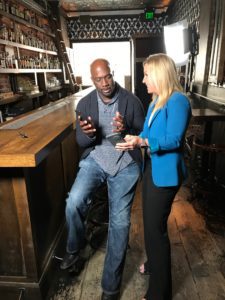 “If we allow the crowd to do it, the control is lost,” says actor Richard T. Jones, who plays the by-the-books San Francisco Detective Tommy Cavanaugh, the morally conscientious side-kick to Piven’s Jeffrey Tanner. “That’s the confusion in the tightrope we walk. We’re excited about the possibilities [of the Sophe app], but concerned about the lack of control. For sure there’s a parallel between Sophe and the real-life technology available to people today. That’s why this is so interesting.”