NOTE: This story first ran in the national print edition of USA Today on 2/8/2018 and is available via USA Today online here. 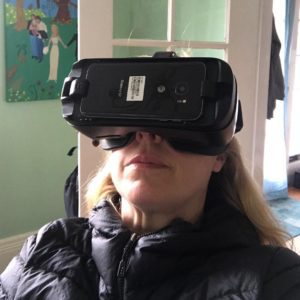 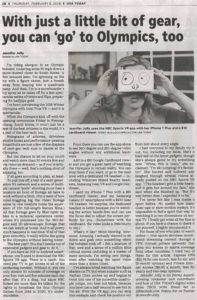 I’m riding shotgun in an Olympic bobsled, rocketing some 90 mph down a snow-dusted chute in South Korea. A few seconds later, I’m spinning on the ice with a figure skater, just a breath away from leaping into a quadruple jump. And then, I’m in a snowboarder’s icy spray as he takes off for a last spectacular series of twists and flips, preparing for halfpipe gold.

I’ve been previewing the 2018 Winter Olympics with Intel True VR — and it is spectacular.

Holograms of athletes, driverless shuttle buses, and performance-peaking SmartSuits are just a few of the displays of next-gen tech sure to dazzle people at the Olympics. But the chance to sit on your couch and watch more than 30 events live and via video on demand — as if you’re actually there — well, that’s nothing short of amazing, too.

If all goes according to plan, at least.

To pull this off, a test of a next-generation 5G network and a series of multiple camera “pods” shooting more than a terabyte an hour of footage all have to work without a hitch. (For a taste of how mind-boggling big the video footage alone is, one terabyte holds the equivalent of 250 full-length feature films.) All that footage goes by fiber-optic cables to a technical operations center, where it’s processed into the 360-degree and 3D stereoscopic footage that we can watch at home. And it all pretty much happens in real time. If all of that goes smoothly, it really will be like going to the Olympics without leaving home.

The best part? You don’t need a ton of expensive gadgets and gear to do it.

If you have an iOS or Android smartphone, you’ll need to download the NBC Sports VR app. There is a catch: You need pay TV to get access to all of the streaming content. Without it, you can only stream 30 minutes of coverage on your first visit and five minutes each day after that. It’s a drag, but since NBC forked out more than $4 billion for the rights to broadcast the four Olympic Games from 2014 to 2020, it’s understandable.

From there you can use the app alone to see 360-degree and 180-degree video angles without any additional hardware.

Add in a $10 Google Cardboard viewer and you get a great taste of watching the Olympics in virtual reality. You can stop there if you want, or go to the next level with a dedicated VR headset — including Windows Mixed Reality headsets, Samsung Gear VR and Google Daydream.

I used my iPhone 7 Plus with a $10 cardboard viewer, and my Samsung Galaxy S7 smartphone with a $100 Gear VR headset. No surprise, the dedicated headset is better because you’re watching the action hands-free, and can use the focus dial to adjust the screen perfectly for you. (Sometimes with the cardboard, the video looks a little blurry to me.)

What’s it like? Mind-blowing. Awesome. Amazing. I actually wanted to sit down and grab onto something when the bobsled took off. I felt a mixture of fear, awe and a sense of a million little critical moves unfolding in a matter of mere seconds. I’m seeing new things, even after watching the same video more than a dozen times.

I’ve always loved watching the figure skaters on TV, but when a skater like Nathan Chen arches up and begins to twist into one of his incredible quadruple jumps, you best not blink, because you have just a half-second to see him in the air. With the VR app, you can stop him mid-spin and check his position out from just about every single angle.

I had everyone in my family try it out too, including my mom. She’s a hard sell on the latest gadgets, though she’s always game to try something new. “Whoa, this is crazy,” she exclaimed, “I’m ski-jumping! It’s fantastic!” She hooted and hollered and laughed through several videos already posted on the NBC Sport VR app. “(The headset) gets a little heavy, and it gets hot around my face,” she said when she finished up. “But it’s way better than I expected it to be, and a lot cheaper than going to the Olympics, even though you still feel like you’re there. I’ll watch about 20 minutes of it at a time, and I’ll watch on regular TV too.”

I’ve never felt like I was inside a sport before. No matter how many close-ups or slow-motion replays, it’s impossible to feel a sport that way by watching it in two dimensions on normal TV. I finally get what all the fuss is about. If you have a chance to check it out yourself, I highly recommend it.

For those of you who plan to watch online — true sports devotees recommend streaming content through a VPN (virtual private network) that gives you access to sports coverage from other countries. I tried two of them out for this article, Express VPN ($12.95 for one month, less for six- and 12-month options) and Private Internet Access ($6.95 per month, less for yearly and two-year options).

Several Reddit discussion groups recommend the CBC’s (Canada) or BBC’s free coverage of the Olympics for getting in-depth reporting from many of the various venues, though obviously they focus more on athletes from their own countries.