Let’s face it, parents, most of us lose our kids at least once or twice while they’re growing up. Sometimes they just get a little too good at hide-and-seek, as my then-four-year-old daughter did for a few heart-stopping moments inside a department store several years ago. Or maybe they just aren’t where we expect them to be — even for a minute or two — and it’s absolutely terrifying.

Apps on smartphones like Life360 and even Find My Friends work great to help track down teens and older kids mature enough to manage the responsibility of owning a smartphone. But what about for younger ones? What’s the best way to keep a watchful eye — that isn’t a smartphone?

TECH THAT FOLLOWS THE KIDS WHEN YOU CANNOT

“I think we all have a story that scares us like that,” says the Chicago-based father of two, John Renaldi. “Three years ago, I lost sight of my six-year-old son Ethan while playing near Millenium Park in downtown Chicago. I found him after about 30 minutes of increasingly frantic searching. He was totally oblivious and happy, but I’ll never forget that feeling of totally helpless panic.”

The sugar-packet sized tracker slips into a pocket, clips onto a waistband or shoelace, pairs with an app on your smartphone and can track your kids in real time, pretty much anywhere in the world. It uses “progressive beaconing,” which is a combination of WiFi, cell networks, GPS and Bluetooth. It’s water-proof, hassle-free and discrete, with the idea being that your youngster will forget they’re even wearing it. Meanwhile, the tiny gadget delivers real-time location info for a full week on a single charge. 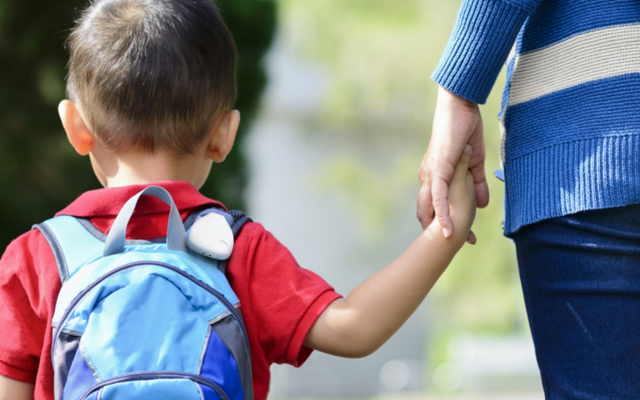 To periodically check-in on your child’s whereabouts, it’s as simple as opening the app. But you can also set up location alerts to tell you when the device crosses certain map boundaries. You can set those alerts for common places, and you’ll get a buzz when your son or daughter leaves the house and then again when they arrive at a friend’s place, the library, swimming pool, Grandma’s house, or anywhere else.

Adding tracking security to a child’s routine is one thing, but with so many data breaches making headlines lately, Jiobit says they doubled-down on personal information safety too. “We encrypt all of the tracking data on both ends — the device and the app — at rest and transit, so that it can’t be snooped-on by anyone else,” Jiobit’s CMO and mom of four, Lindsay Slutzky tells me over the phone. The tracker also has a tamper-resistant security chip, and your child’s location data is never sold or viewed by anyone but you or people you permit to view it through your account. “I would never use it on my own three and four-year-old sons if it weren’t totally locked down,” Slutzky added.

Checking the up-to-the-second location of your child is a great way to gain some peace of mind, but when you want to hear their voice, you’re going to need something a bit different. Relay (starting at $99, plus $6.99 monthly data charge) is a Post-It note-size, screen-free cell phone alternative that puts you in direct contact with your child, with the tap of your smartphone screen.

Think of Relay kind of like a walkie-talkie, only smarter. You can connect to your child’s Relay whenever you want from either your smartphone or from another Relay device, and they can contact you by pressing the large button in the middle of the gadget. But unlike a walkie-talkie, Relay uses 4G LTE connectivity to keep you in touch with your youngster.

The kids we tested out the trackers with definitely love the walkie-talkie function — so much so that you have to be careful they don’t run down the battery, or your patience, using it non-stop. Similar to Jiobit, you can use an app on your smartphone to see their location on a map, and it’s great to tap the center of the gadget and tell them it’s time to come home. Right now, there’s no way to clip the device onto your child, you have to just slip it into a pocket or pouch, but Relay says they’ll have solutions to that soon. 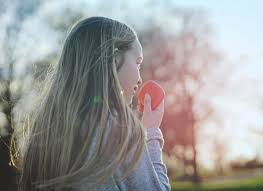 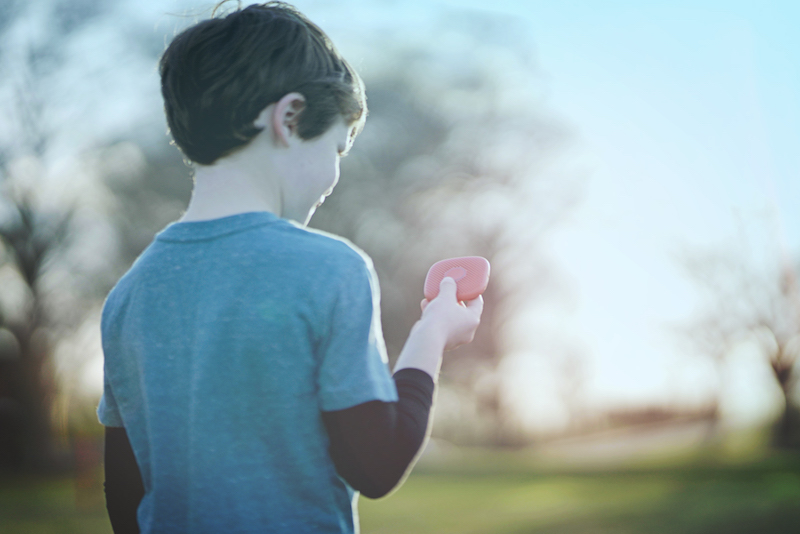 Also, like Jiobit, Relay is the result of experts in the mobility space, who also happen to be parents. “We set out to make something fun for kids,” says Raleigh-based Relay SVP Jon Schniepp, father to two sons, ages three and six. “When we tried all the other trackers with our own kids we realized that eventually the novelty wears off and they don’t want to have anything to do with it. But how do you keep in touch? Get them a smartphone, and you have to worry about screen-time, access to inappropriate content, and who has the ability to communicate with your child. Today it’s about communication, that’s fun for kids.”

With more and more young kids getting smartphones almost as soon as they can walk, it’s nice to know there are still some great alternatives out there that will help us connect without pushing a preteen into adulthood at a breakneck pace.

Jiobit and Relay are the best I’ve found to help you keep in touch with young ones. But if neither of these strikes your fancy, there are a couple of wrist-worn watch-like options that we did not go hands-on with extensively for this review. One we tried when it first launched though, was the HereO kids watch ($199, plus $4.95 monthly data charge after the first six months). It serves a similar purpose as the Jiobit, with a built-in GPS tracker that sends location info right to your phone, and with its bright colors and fun design, it’s probably something your kid will love to show off. For almost-teens, the back-to-basics Nokia 3310 ($59.99) is a great almost-smartphone with a battery that lasts up to 27 days on a single charge and a durable design that won’t buckle under the pressure. If it does meet with catastrophe, its price won’t break your bank either.

None of these is an instant “easy button” for being a parent, but they sure can help for peace of mind. “Tracking technology is no substitute for good parenting,” adds Slutzky. “It’s an extra tool — a proactive way to help keep them safer in our increasingly connected world.” 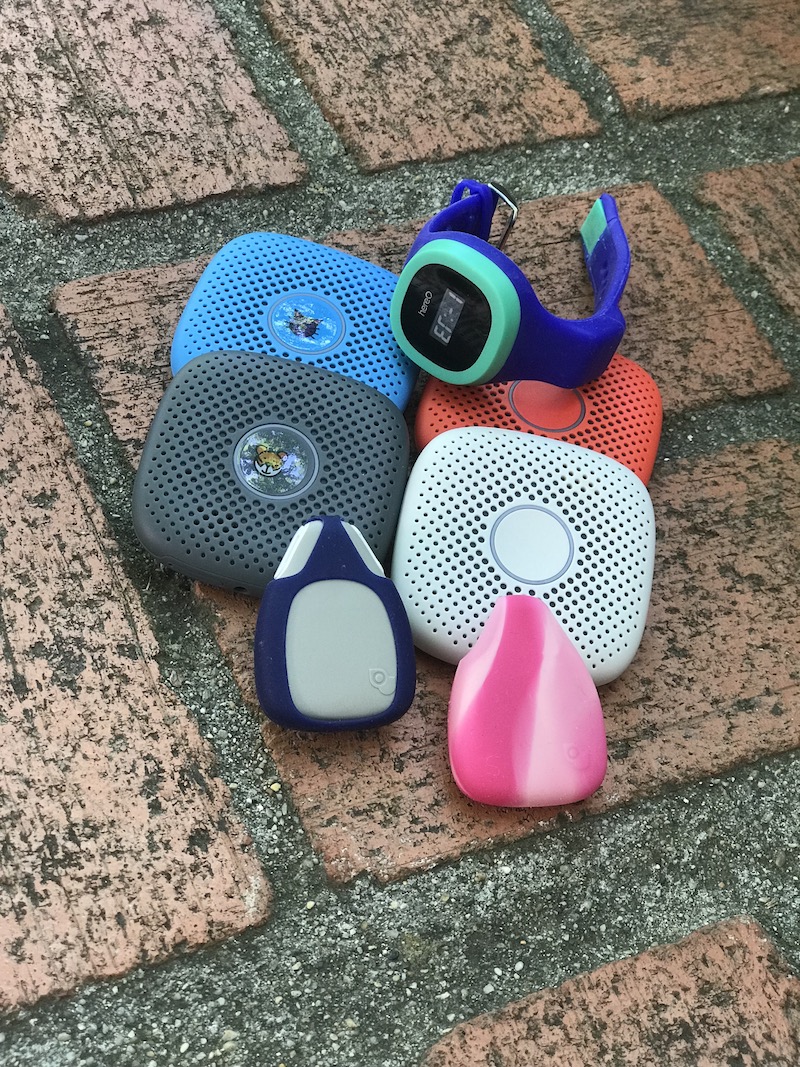