Gadgets and gear to help you take a SAFE road trip during a pandemic:

Since so much of his on-location production is shuttered right now, and we both work from home anyway, why not just hit the road?

We can explore off-beaten paths and reconnect with one another – while remaining safe in our self-contained, extremely COVID-cautious little bubble.

We’re not the only ones thinking this way. RV and van sales and rentals alike have surged since early summer, with no signs of slowing down. Van rental start-up Cabana reports its business is up more than 650%, while similar companies like Roamerica and Outdoorsy have experienced similar upswings since the pandemic began.

Whether renting or trying to turn an older-style passenger van into a self-contained tiny-home on wheels (on a tight budget) like we are, there’s a lot of homework involved. Even my friend who just completed a 34-day van trip across the country and back with her seven-year-old triplet sons (!) – said it was really hard to find trustworthy advice all in one place. 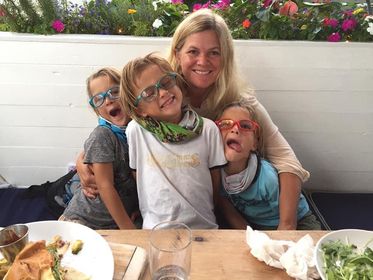 I’ll get to more of her story in a second, but first, the basics of what I’ve learned after hours of researching #vanlife blogs, posts, and getting all kinds of advice.  It’s also worth noting that we had to scrap our first three-week-long trip due to the rise in COVID cases and CDC’s latest directives to stay home. But for shorter day-trips in totally remote areas, and our first big work voyage coming up in early January, here are the meticulously researched and tested tech tools to keep ourselves – and everyone around us – safe.

For any road trip, especially in the winter during a pandemic, FEMA recommends a well-supplied emergency kit with everything you might expect, like jumper cables, flares, and a back-up cell phone charger. But it’s 2020, and there are a whole lot of upgrades to those basics.

You can start the engine, charge gadgets, and light the way, all with this one compact device. The Weego 44.1 can charge everything from a car, van, boat, to all our phones and tablets, and shine a 500-lumen flashlight for hours on end. The company makes a range of jumper/charger combos if you’re looking for something a little less expensive too.

The other charger I always have with me is this Renogy PHOENIX 100 Mini Power Station that weighs about one pound but holds enough juice to charge your laptop, with an AC outlet – plus USB A, C – and all the other outlets you need. You can use it to charge your smartphone, tablet, burner plates while you’re camping, power tools, and more. I’ve even used it to charge-up my mini-camera drone on the go.

While those bright old stick magnesium flares are great standby’s, the newer LED versions are better for the environment, crushproof, water-resistant, and safer than traditional flares. Of all the LED’s we tested, the StonePoint LED Emergency Beacon outshines the rest. They’re easy to turn on, stay bright for hours, and have magnets to mount on your car to warn drivers who might not otherwise see them on the road.

It’s frustrating when you can’t get a cell signal, but when you’re in the middle of nowhere during a pandemic, it can be life-threatening too. The SureCall FUSION2GO 3.0 fixes that whole “can you hear me now,” issue. It’s a cell phone signal amplifier that boosts weak signals for multiple devices, and it works across all carriers too. It takes less than five minutes to set it up in your car, truck, or RV. It lets you quickly access maps, weather, extends your coverage, call-clarity, and even helps you stream your favorite movies or music on the go.

Since finding SureCall, we typically have a great cell connection now and use Waze versus a separate dashboard GPS system. Same with dash cameras — our iPhones are all we need. But to hold it securely in a safe place, we use the iOttie Auto Sense dashboard mount. We’ve tried several versions of these over the years and this one actually stays put on the dash and automatically hangs onto your phone even when you hit some really bumpy roads.

Masks, hand-sanitizer, a first-aid kit, ice/snow scraper, sleeping bags, extra food, and tire chains round out our list of the must-have “health and safety” supplies. Most everything else is all about comfort, convenience, and a touch of extra care on the road.

We’re not staying in hotels, and we plan to be as self-sufficient on the road as we can, with exceptions for getting fuel and groceries. For advice on all of this, I turned to my friend Jeana Jorgensen, who just finished a 34-day day cross-country (and back again) van trip with her three seven-year-old sons. Yes, you read that right. Jorgensen has identical triplets.

“I hate road trips,” the 47-year old Seattle-based single mom told me over the phone. “But I had not seen my mom – who lives in Georgia – in a year, and I had a rare several weeks off from work, with the boys homeschooling, and I don’t know when that will ever happen again,” she explained.

Jorgensen also has a Sprinter van and said she packed “gallons of hand-sanitizer, about 30 masks,” and a ton of disposable wipes. Most importantly though, she made a deal with her family that if they came across a person, place, or situation that made them uncomfortable, especially with how careful they’re all being during the pandemic, they would leave. “90% of the country was not wearing masks, and that really bothered us,” she said. “But we always had a double-layer – a regular mask with a buff or bandana over it – and were able to keep our distance and live out of the van. There were so few people at the [National Parks], we were one of six people at Mount Rushmore and had front row parking at Old Faithful in Yellowstone Park, so it was mostly great. We didn’t feel safe in Branson, Missouri, so we just turned around and left.” 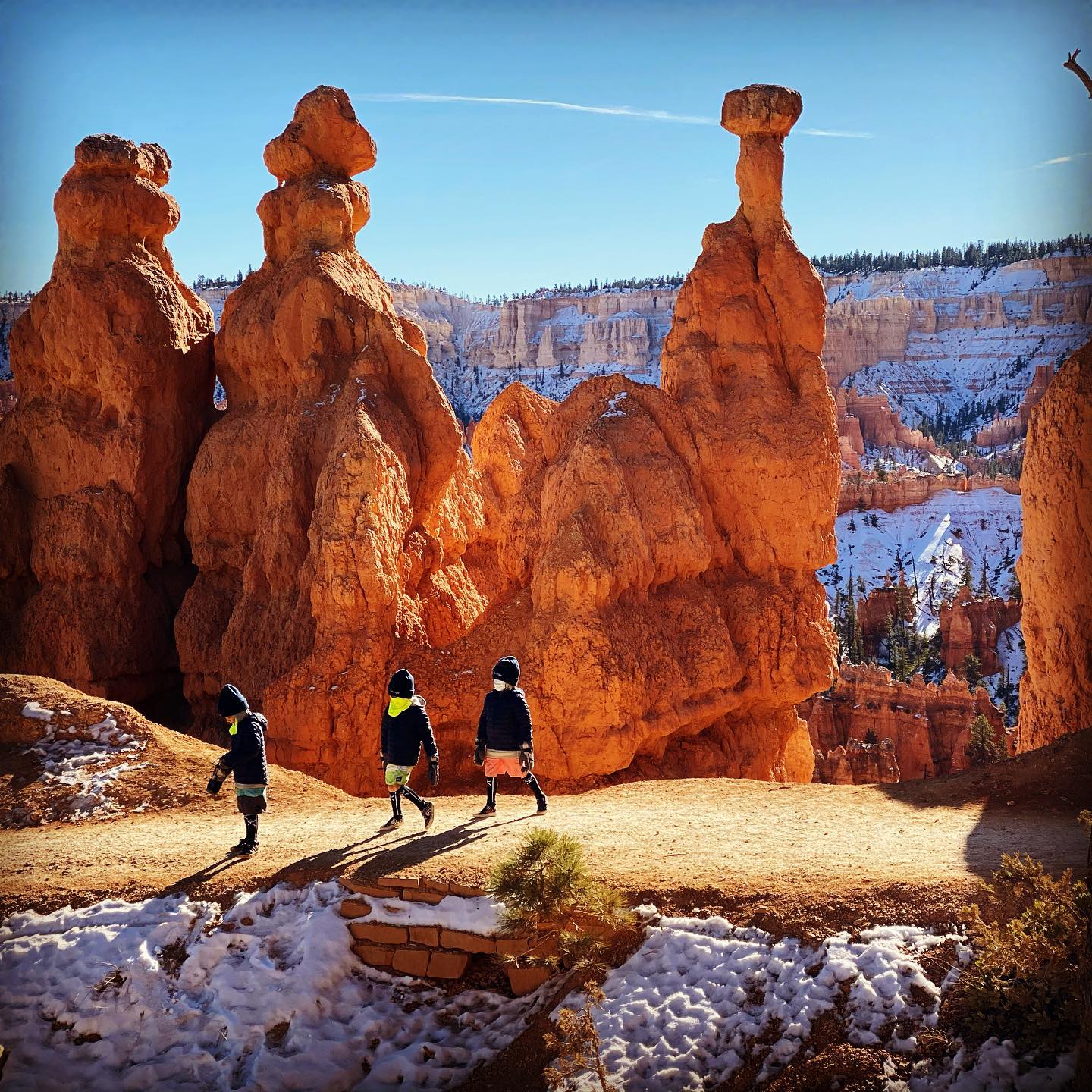 Places to stay and sites to see

To find places to stay and sites to see, Jorgensen relied on a mixture of apps, like Hipcamp and the KOA Camping App. “KOA has RV hookups for power, water, and has fire pits, laundry, showers, and it was mostly empty. The people there were really nice too. Hipcamp is like the Airbnb of campsites, as they are all privately rented spots. We had great service at both.”

Jorgensen also worried about seeing her mom and said even though she and her sons remained fairly isolated, she tried to get COVID tests in every town. “We must have tried at least 35 CVS and Walgreens, but my van didn’t fit under the drive-through window area, and they wouldn’t let us walk through,” she said. “There was a degree of risk for all of us, but we were beyond careful at every step. The boys were really into it, and for someone who hates road trips, I just loved this one.”

Life on the road

To find safe places to park overnight, I’ve also used the Dyrt app, which covers more than a million locations around the country, including Hipcamp, RV sites, State and National Parks, and even free dispersed camping sites on Bureau of Land Management (BLM) land. The basic Dyrt app is free, but there’s a sale on the pro version right now where you can get six months for free, then pay $36 a year after that. The pro version gives you more offline access and map downloads, and more trip-planning features.

For all those hours you’re not behind the wheel – I found MotorTrend’s “Hooptie Holiday Bundle” ($24) the ultimate road trip/binge-watch must-have. Especially at times like this when there’s no outside entertainment, no going to sporting events, music venues – no doing much of anything with anyone else really. What’s so good about it right now too is there’s a half-price deal – until Jan. 4 – getting you access to the MotorTrend App’s 3,600+ hours of shows and motorsports events, and a whole bunch more goodies. (I’m addicted to Top Gear.)

The Muzen Rugged Wild Bluetooth speaker and flashlight combo is another small but mighty fun find. It gives you six hours of solid tunes on a single charge, plus its water-resistant, super small, can clip to backpack, or even sit on the dashboard.

For making our morning cappuccinos on the go, we use the compact WACACO Minipresso Kit and I always have the LifeStraw Go water bottle by my side. The LifeStraw bottle removes bacteria, so even if we have to melt snow to drink, I know it’s safe.

We don’t have a kitchen or bathroom built-in to our van, and while the Tinkle Belle Female Urination Device (aka “pee funnel”) is all well and good in an emergency, we upgraded to the Thetford Porta Potty 565e, which is fancy enough to have an electric flush, no odor, and you can dump it the same you do with RV waste (black water). That saves you from most of the icky mess.

For food, coolers are fine for weekend trips, but for living on the road, we splurged for a Dometic CFX28 12v electric powered cooler, which has a compartment to keep food frozen. This one costs a whopping $800, and yes, it’s really expensive, which underscores an important lesson we’ve learned the hard way: Roadtripping during a pandemic is more popular than ever, and it’s expensive, especially to do safely.

We don’t have young children anymore, but Jorgensen swears by the $30 Kenley Kids Travel Tray and the $17 Car Trunk Organizer bins. She also said a few non-tech tools were real life-savers too.

Move aside, Google and Apple Maps: Why people still love their paper maps

“I invested in this paper-based Atlas with all the National Parks. There were far more places that we could not get any cell coverage, so apps and GPS just didn’t work, and I had to revert back to traditional maps. During my planning, I was warned several times to make sure I had a paper Atlas and I kept thinking I’d never use it, but I did ALL THE TIME.”

The other must-have for the kids is a paper copy of a Kids Atlas. “The boys went through this book and marked everything they wanted to see and I planned the trip around that (and what I wanted to see).”

Last, but not least, take a look at the ShieldPod. This helps keep people at a safe distance because you look crazy walking down the street in it. But, they’re also in high demand because they let you build a bubble around yourself indoors and out. You wear it like a backpack, with a waist strap to keep it in place, while the clear panels allow for a wide view of your surroundings. There are holes for your arms and the bottom is open too, and it’s not a medical-grade gadget, but it sure gives everyone something to talk about!

Hacks, News, Wired Well
As Seen on the Today Show: Unlock Your Smartphone Superpowers With These Hacks!
Home & Family, News, What to buy
CES2023: Is This the Key to Smarter Home Tech That We Can Actually Live With?
Gift Guides, What to buy, Win it!
As Seen on TV: 10 Top Tech Gifts That Deliver More Value