This story originally appeared in USA Today – in the print edition on Wednesday, 1/102018

A New Year means one thing in the world of gadgets — a trip to Las Vegas for CES. It’s the enormous consumer electronics show packed with nearly 50-football fields worth of shiny new tech toys.

Somewhere inside the cavernous convention center crowded with TV’s we can’t afford, concept cars we’ll never drive, and stupid “smart” things we’ll never use (Alexa-enabled toilet…really?), there’s always a handful of gadgets that really can hit the jackpot of product-perfection.

That’s what I set out to find early-on here in Las Vegas. Here are my favorites so far.

Something new under the sun

The smallest new wearable I’ve ever seen could also be one of the smartest when it comes to protecting your skin. L’Oréal’s new UV Sense is a tiny tracker that fits on your fingernail. But the diminutive dot packs enough tech to give you UV, pollen, humidity, temperature, and air quality levels. It uses NFC to pair with an app on your smartphone and can give you reminders to put on more sunscreen or stay out of the sun altogether.

Price: L’Oreal’s hope is to price it around $40, and will give it a limited release in the U.S. this summer, before it hits store shelves next year. 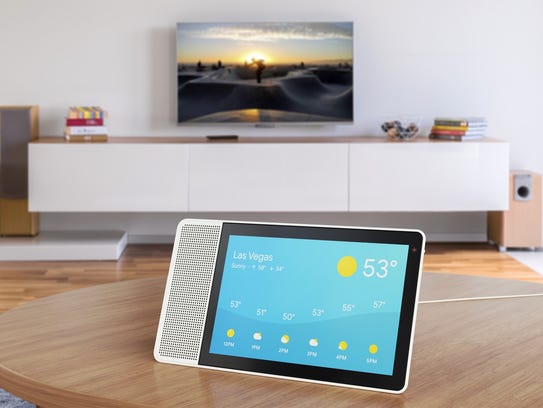 The Lenovo Smart Display with Google Assistant could be to the next-generation smart home what the iPhones were to smartphones. Really. (The demo I saw was that good.) It’s a tabletop smart screen that acts as a touchscreen tablet, virtual personal assistant, and smart-home hub. With a gorgeous upscale design, it’s also pretty enough to keep on a countertop in your kitchen or perched on a bedside table.

You can set it up to say, “Hey Google,” and start a routine: Turn on the lights, get the coffee brewing, read your daily schedule, give you traffic and weather reports, wake the kids, and remind you to feed the dog. You can also use it to video-call your mom, or watch the morning news while you eat breakfast.

If this all sounds like stuff you can already do with an existing connected home device like the Amazon Echo Show, that’s because it kind of is, except that the Lenovo Smart Display does it better, faster, and is a whole lot easier to use in general. It also has two additional features to address privacy concerns. You can mute the speaker, so it’s not listening for its wakeup word, and flip a switch to cover the camera (versus the DIY method of putting tape over it).

When Merge VR first showed me their new plastic Nerf-like toy gun that pairs with an iPhone app to play games, I thought, so what? Then I played with it. It is is totally awesome. Called the Merge 6DoF Blaster, you slide an iPhone into a holder, fire up the app and just like that, you’re battling blaster-yielding space aliens. It’s VR, without any VR glasses or goggles! So, when the aliens shoot at you, you have to hide behind walls and duck under tables to dodge their laser beams. You’re in the game, but not at all out of touch with everything around you.

6DoF stands for  “six degrees of freedom,” which is a buzzy term used a lot in virtual reality circles to describe being able to look and move all around, while still playing in a virtual world. That’s a good thing to be able to do with a headset, and kind of an amazing thing without it.

Price: The Merge 6DoF Blaster comes out this summer, likely for a price tag in the $50 dollar range.

Travis the Translator is the closest thing to a real-time language translator that I’ve ever seen. It’s about the size of a flip phone, and can translate 80 languages with a SIM card or WiFi connection, or 20 in offline mode. Let’s say you’re in Italy, don’t speak Italian, and need to ask for directions. You tap a little touchpad and scroll to pick the two languages, tap an arrow and speak normally. About a second after you stop talking, your question pops up in a small little window, in Italian, and a voice asks the question out-loud too. When it’s the other persons turn to talk, you tap another arrow, let Travis listen, and it repeats the answer back in English.

The company behind Travis told us they partnered with “the world’s best translation engines” for each language and that the gadget can even auto-detect languages, as well.

Price: Priced at $199 right now on Indiegogo, this palm-sized gadget could have a big impact on bridging cultural barriers.

USA TODAY tech columnist Jennifer Jolly has fun with some of the tech gadgets for your home at CES: 2018 Jennifer Jolly, Special for USA TODAY

Imagine an Amazon Echo with a cute-as-can-be face. That’s BUDDY, one of the best “social companion” robots we saw at last year’s CES. It’s back this year and ready to go home with you — almost. It won’t hit stores until September, with a price tag of $1,500. So why fork over a small fortune for a cute hunk of plastic? I think of BUDDY as the entry point to the robot revolution.

Right now, the Google Assistant voice-controlled robot can roam around your house looking adorable and interacting with you. It can turn on music, show you the latest weather conditions on its little tablet-like face, answer simple questions, and even show a live feed of your house while you’re at work. It also told me a bunch of jokes, danced with me, and followed me around the showroom floor flashing impish smiles to make me laugh. While it won’t do dishes or fold laundry yet, BUDDY is still a newborn in the gadget world, with potential to grow into a cherished part of your household. 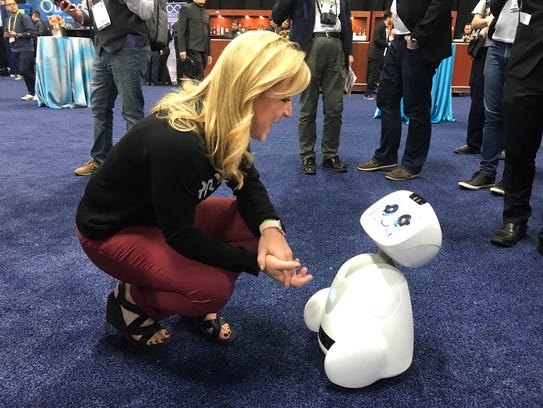 Watch what you eat

This tech gadget aims to help you understand what you’re eating. (Photo: LinkScan/handout)

If you’ve ever had food poisoning — which one in every six of us has according to the CDC — you’ll want to know about this gadget. The LinkSquare is a magic marker-sized scanner that can tell if meat is rotten — think salmonella, E. coli and norovirus — whether alcohol is fake, or prescription pills are what they’re supposed to be. Trust me, just because a pill looks like a pill doesn’t mean it is in fact the RIGHT pill. It  can even tell if you the money in your pocket is counterfeit. It pairs with an app on your phone and the makers told me there are a lot more features to come.

I’m not saying you NEED any of this – this is what’s debuting that you’ll see some form of showing up at home this year – versus being strictly a concept that might not ever see the light of day.