On the eve of the world’s largest consumer electronics show in Las Vegas, construction giant KB Home unveiled the first full-scale prototype smart home of the future – and gave us the very first peek inside.

The home, called Builder KB Home ProjeKt, sits at the end of a quiet cul-de-sac in Henderson, Nevada, a 15-minute drive south of The Strip. The 3,200-square-foot concept house is the first-of-its-kind marriage of smart home systems and Jetsons-like tech, built from the foundation-up with over 400 gadgets working (mostly) in harmony.

A smart speaker that controls living room lighting or a video doorbell that streams a live feed from the front porch is about as far into smart home tech as many Americans are willing to tread. According to NPD, just over 15 percent of Americans have even a single smart home device, though that number is rapidly growing.

The Builder KB Home ProjeKt, on the other hand, envelopes you in smart systems the moment you turn the knob. Walking in the front door prompts the house to “wake up.” Blinds rise, lights come on – mimicking the natural light outside to match the body’s circadian rhythms – and a robot named Keeker rolls by to welcome you home.

The super-smart home has no shortage of familiar gadgets – 76 connected lights, Google Home integration, a smart refrigerator that can communicate with an app connected oven and dishwasher, and a personalized showering experience thanks to Kohler – but the building’s smarts go much, much deeper. 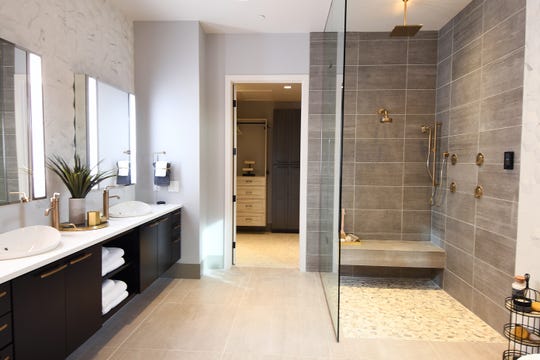 In the Projekt master bathroom, the mirror is a smart device, and smart appliances are sprinkled throughout. (Photo: KB Home) 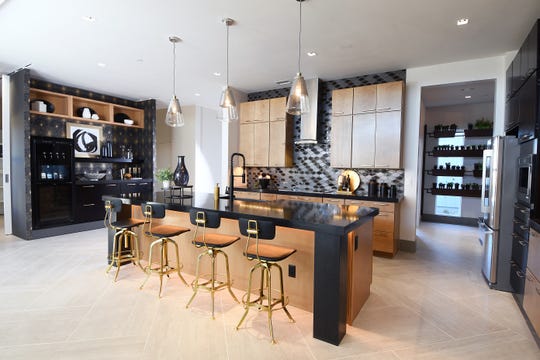 Then there’s a wall that, well, moves. No, seriously, the Builder KB Home ProjeKt is equipped with a movable wall that completely changes the look and feel of a living space, from home office to a guest room, in a snap. Meanwhile, next to the kitchen, another wall has a vegetable and herb garden growing out of it, with a series of sophisticated lights and sprayers, so you can harvest veggies for the freshest of home cooking.

While we’ve already seen all of the specific connected gadgets installed in the Builder KB Home ProjeKt before, we’ve never seen them all in under one roof. While the early prototype results can be laggy at times – in that you give the house the command and it takes a few seconds before anything obvious happens – it offers the real glimpse of what our home-lives might look like in the not-so-distant future.

“We’re always exploring where tomorrow is going to be. There’s a saying if you want to predict the future, the best to do that is to create it yourself,” Jacob Atalla, VP of Sustainability for KB Home tells me as we stroll through the house. Atalla also says there’s increased demand for homes that offer people more in terms of health, wellness, flexibility, and sustainability. “We’re going from smart to smarter,” he adds, “to a home that starts to think for itself, on behalf of the people who live there.”

The base price of the home, based on location, square footage, and other factors, would be around $400,000, but this one’s not actually for sale. With higher-end finishes and teched-out to the hilt, the cost of this souped-up version as it sits today is more than double that, but KB Home is optimistic that as these advanced features are adopted more widely the prices will become much more affordable.

No one can say for certain just how long it’ll be before such total tech integration becomes the new norm, but the Builder KB Home ProjeKt shows that the future of high tech living might already be closer than you think.