USA Today: Cruising into the future of travel with smart wearables, avatars, and lightening-fast WiFi 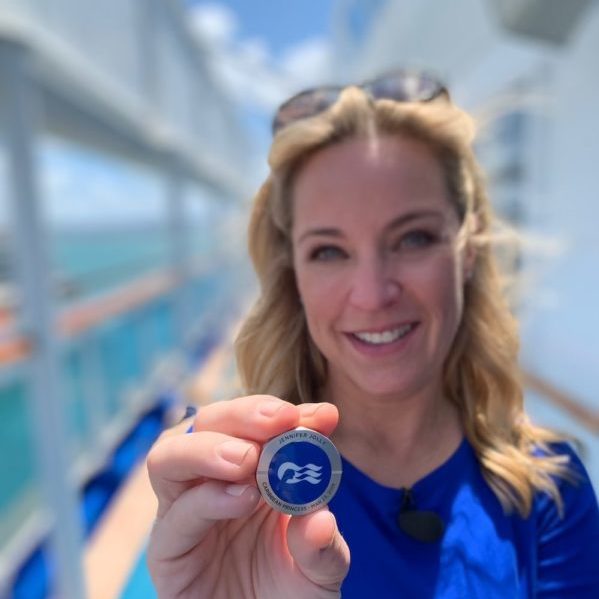 A year ago, boarding a cruise ship at the Port Everglades dock in Fort Lauderdale, Florida, was an exercise in patience as passengers waited in blocks-long lines to check in. Pens and paper in hand, anxious vacationers hunched over suitcases or used walls as a hard surface to scribble down important personal information, sometimes waiting hours just to set foot on board.

Today, those lines are gone – at least in front of the Caribbean Princess. That’s the first sign that a new wearable gadget aimed at fixing common travel hassles, is working.

“Look at that,” exclaims John Padgett, Carnival Corp.’s Chief Experience and Innovation Officer, as we breeze through the check-in and walk onto the ship. “Just imagine getting rid of the lines at airports, car rentals, waiting for food. Vacation time is the most valuable thing in the whole world. Our (new technology) is going to make it better.”

Showing the OceanMedallion on deck at dusk. (Photo: Jennifer Jolly)

Padgett’s one of the masterminds behind the small, laser-etched aluminum disc called an OceanMedallion. On the day I step onto the Caribbean Princess bound for the Bahamas, I’m one of some 10,000 people across three different Princess Cruises ships, using it in place of my passport, room key, and money.

If it sounds like Disney’s MagicBand, that’s because it is — kind of. Padgett was one of the lead creators of the $1 billion band aimed at taking the hassle out of vacationing at Disney resorts. Now, Padgett’s pushing further to expand the horizons of friction-free travel with an entirely new wave of technology, rolling out on what may very well be one of the most genius — and unexpected — new consumer gadget testing labs on the planet: A cruise ship.

A passenger using the OceanMedallion to buy a souvenir in the ship gift shop. (Photo: Roddy Blelloch)

Next Wave of Wearables

One of the first things that strike me about the OceanMedallion is that all you have to do to make it work, is wear it. “There’s no on/off button, no charging, no associations, no configurations; you can wear it in the pool or hot tub. It just works.” Padgett explains. That’s key when the average age of the person taking cruises today is 46 and older and doesn’t fall into the “early adopter” category. “The last thing our passengers need on their vacation is frustration, and that includes the frustration of trying to figure out a new gadget.”

When you sign up for a cruise and establish your likes and dislikes – your basic vacation profile that includes your choice of the ships’ restaurants and excursions, among other things – you can opt-in to use the OceanMedallion free of charge. The company sends it to you a few weeks before your trip, along with a lanyard to wear it in.

Each medallion is equipped with the latest Bluetooth and NFC technology, which allows the ships 7,000 sensors, scanners, and crew e-readers to recognize each person individually, no matter where they are on the vessel. It unlocks your cabin room door when you walk up, no keycard needed; it lets you buy whatever you want on the ship and charges it to your account; it shows your photo, name, and keeps track of your past orders, so that bar and dining staff can greet you personally; and it makes boarding and disembarking as simple as walking past a fancy sensor.

A passenger uses the touchscreen to find his way around the ship. (Photo: Jennifer Jolly)

While the medallions blend in, their cyber-sister – a few hundred giant 4K touchscreens next to elevators and in hallways – capture your full attention. They give you a birds-eye view of your surroundings, telling you where you are on the ship and helping you find your travel mates.

When you’re on a ship that’s four city-blocks long and more than ten stories high, that feature alone comes in handy several times a day. Several of the touchscreens also show you exactly what activities and shows are happening on the ship at any given time during the day and night so you can customize your itinerary. But the biggest draw is the new personal avatars that the company calls “Tagalongs.”

“We recognize a guest in space (on the ship) through a real-time avatar that lives throughout the ship,” Padgett says. When you walk near one of the touchscreens, your Tagalong – you choose between an angelfish, seahorse, or sea turtle that you can customize thousands of different ways – swims into view, ready to play.

I thought this would be cute for kids while they wait for an elevator to come, and then I started playing around with it myself. Like the pull of many popular screen-based amusements, it’s easy to get sucked into the trivia game or an interactive scavenger hunt called “Ocean Treks Adventure.” Of course, these games aren’t limited to the indoor touchscreens, and an app for mobile devices called PlayOcean can keep you tapping, swiping, and interacting with other passengers all cruise long.

While you can leave your smartphone in your room and let the OceanMedallion do all the work, most people still keep them nearby, whether using it for sundeck selfies, checking the weather, or trying to check scores during March Madness.

For that, Padgett and his team created a suite of smartphone apps – five of them that they encourage travelers to download before they leave the house. “It gives you ways to order drinks without getting up out of your deck chair, watch movies, or order a spa service in your room,” Padgett said.

But five? Why couldn’t they make one app to do all those things? “It’s like having UberEats, Netflix, Waze, Candy Crush, and DraftKings, but all tailored around your experience on the ship. If you have all of those apps in one, it kills your battery life. This way, they’re all here to use as much or as little as you want.”

The remaining piece of this new high-seas tech ecosystem is shipwide internet access with Wi-Fi speeds that rival what you get in your own home. Carnival calls this MedallionNet and sells it for just under $10 a day. Like no lines getting on the ship, super fast and always-on Wi-Fi is a game-changer for many cruisers.

“We’ve never been on a cruise where you could actually achieve any type of internet that you could speak of,” Tim Keute, from Edmond, Oklahoma tells me. “Other than what reminded me of the AOL dial-up – you know ‘you’ve got mail,’ doot, deet, der –remember that memorable sound? This is just spectacular. This is what they should have had ten years ago. I don’t know what’s taken them so long.”

Part of what took so long was the mass size and scale of such an endeavor. For just the faster internet alone, they had to retrofit each ship with 72 miles of cables, put a broadband hotspot in every single cabin, and train the ships 1,000+ person crew how to use it all.

The OceanMedallion unlocks my cabin room door when I get a few feet away. (Photo: Roddy Blelloch)

But Does It Make Traveling Better?

I expected a lot of people to tell me they didn’t like all the new tech here. Every single day, people tell me how creeped out they are by gadgets that know a little too much about them, or how much they want to take a break from their devices when they go on vacation. But I spoke with more than 200 people over the week, and passengers and crew alike raved about how much easier it makes their time on the ship.

“It’s personalized to me,” said Brenda Paulin from San Leandro, California. “I think it’s great. When I walk up to my door, my picture and name are there, and my door unlocks. Everywhere I go, everybody knows my name. I’m having a great time.”

“This is fantastic,” added Ruth Cuppa, who traveled from Mildura, Australia, to take this cruise. The medallion “looks attractive, it works efficiently, and just seems to be a better system than the previous little card system.”

“I think the essential magic of the new technology is to be able to get pretty much anything you want, whenever you want, wherever you want on board the ship,” said Peter Hollinson, the Hotel General Manager on board the Caribbean Princess. “It saves time, lets us get to know people right away, and lets us offers more personalization. The on-demand service element is its greatest power and greatest pull.”

The other big takeaway here is what a perfect gadget and consumer tech testing ground a cruise ship makes. With more than 3,000 people on board these self-contained floating cities – a captive audience of “beta” testers if you will – Carnival Corp. gets honest feedback from real people, in real time, without really disrupting anyone.

And they’re not alone. Several other major cruise lines are also going full steam ahead on new technology. Royal Caribbean has robot bartenders and smartphone apps to unlock your cabin doors. MSC Cruises built its own Amazon Echo-type smart speaker named Zoe that converses in seven languages. Nearly all the cruise lines are developing some form of wearable now too. It’s easy to imagine how this innovation might also show up on dry land, maybe in a hospital, university, or even a sporting event.

“What we’re doing with these technologies is very, very different from what has ever been done before,” Padgett says as he shows an older couple how to use the touchscreen to find their way to the restaurant for dinner.