The International Toy Fair was filled with fun in New York City. It’s the largest toy trade show in the Western hemisphere, and it’s a chance to see what will kids of all ages will be clamoring for over this next year. 1,000 companies debuted more than 7,000 toys this year — big trends include Augmented Reality (AR), and more robotics than we’ve ever seen.
Here are my favorites among toys I was able to go hands-on with before the show: 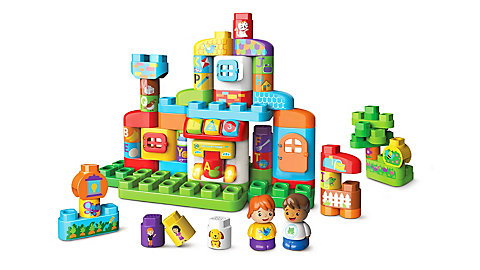 Tots can build, create and learn with this interactive 61-piece house-themed block set. Kids can use the easy-to-hold blocks to build a house and learn about the alphabet, objects around the house, colors, and shapes as they build with the electronic “Smart Star” cube. Insert the 20 double-sided learning blocks into the interactive Smart Star and it will respond with fun sounds, educational songs, and phrases that enhance building play with learning content. For ages 18+ months.

VTech is making its debut in the robotics toy category with Myla the Magical Unicorn, a colorful robotic unicorn that glitters with lights as she talks and sings while introducing early concepts of color mixing. Touch Myla’s wand to the butterfly palette to choose a color. Then touch the wand to her eyes, wings, and horn to decorate Myla in a variety of colors. Then you can sing a rocking duet with Myla and her microphone. When it’s time to go solo, pull the microphone away and Myla will stop singing but continue to play music.

Behold the spud-tacular MR. POTATO HEAD. Place one of the magnetic mouths on his body, press his toe to activate, and he’ll say over 50 wacky phrases, laugh, and sing as his lips move around his belly. Swap out three different mouths (classic MR. POTATO HEAD, glitter lips, and rainbow mouth) and laugh along with all the silly things MR. POTATO HEAD says.  For ages: 4+. 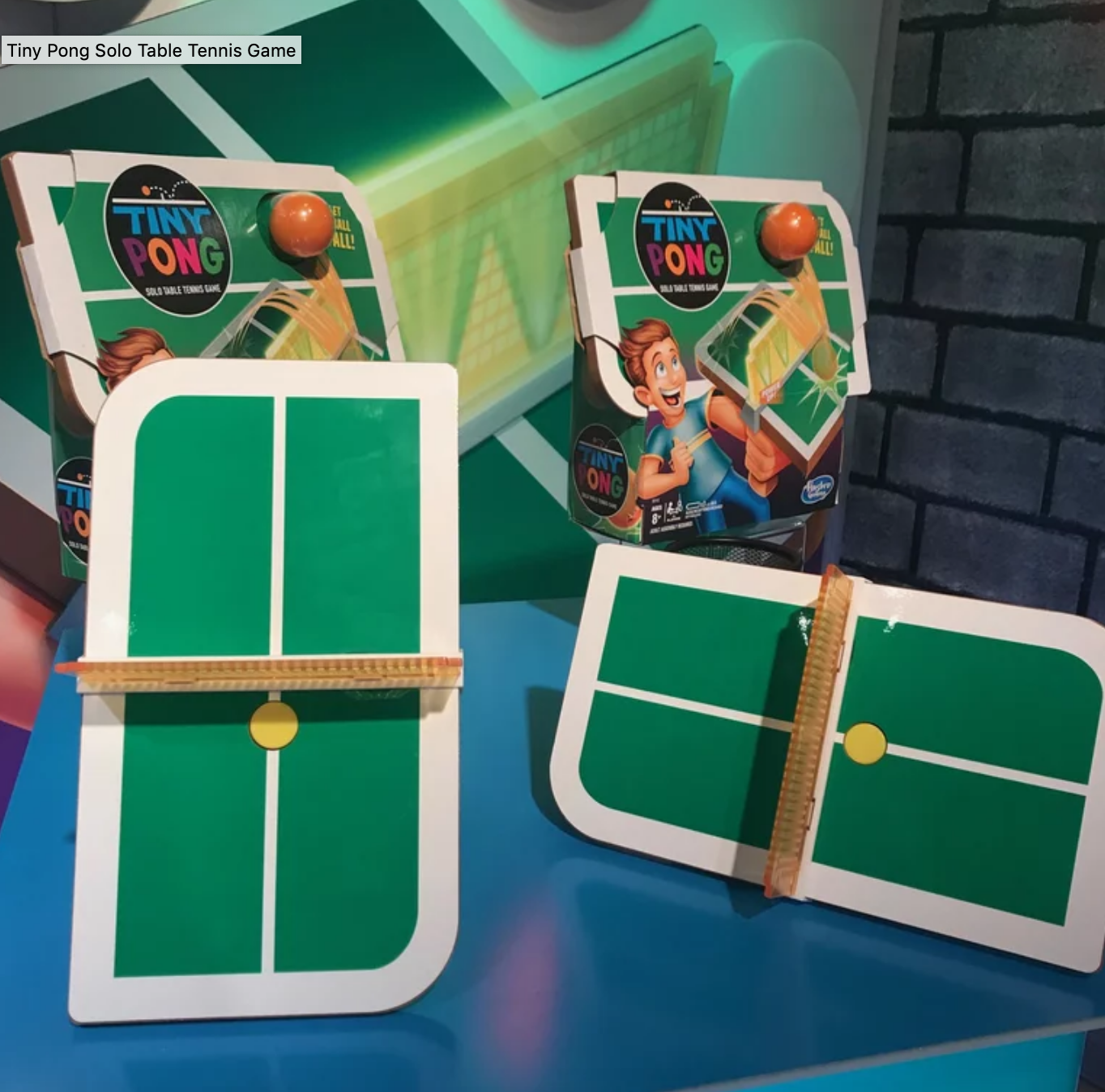 The Tiny Pong Solo Table Tennis game is super fun and crazy hard (so you don’t get sick of it in one day…) Launch the ball off the court and bounce it repeatedly on the court to rack up points. Move the court back and forth under the ball. Keep it going, getting a point for every bounce. How long can you keep it going? Ages: 8 years & up.

These furry little four-eyed friends respond to touch. They sing, dance, and interact with you. They love when you pet them, go crazy when you poke them, and when you scratch their bum… well… you’ll have to see about that one. Let’s just say, kids love them. Ages: 4+ 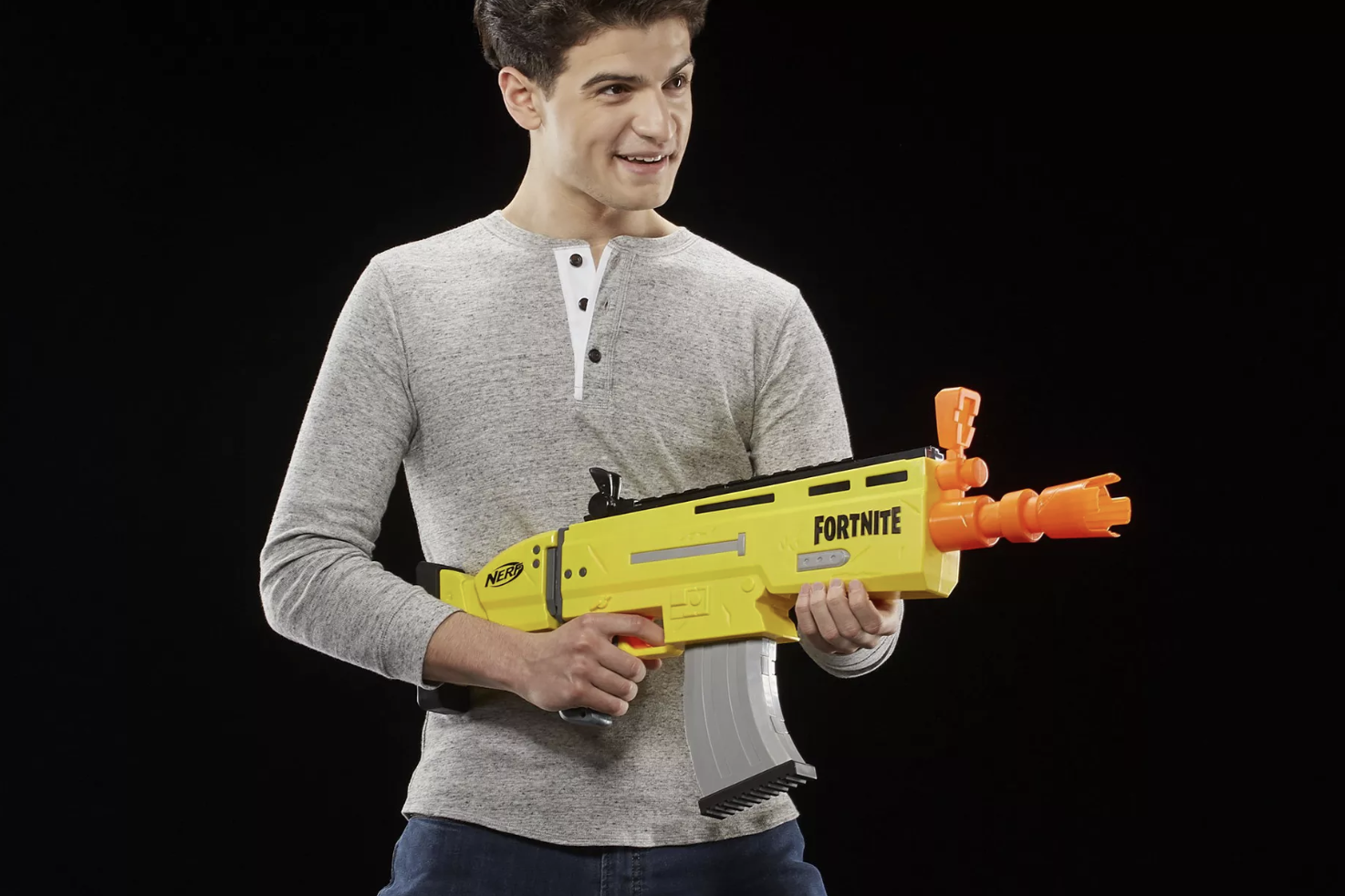 Love Fortnite? Then check-out Nerf Fortnite Blasters and Super Soakers. The blaster line that launches soft foam darts will be landing on March 22, while the super soaker line, which will be perfect for summer water fights, lands on May 7. The entire line is available for preorder. Meantime, there’s another new one, the Nerf Shadow-blaster, that features a clear housing that illuminates when you press the light activator.

Keep the blaster clear to stay in the shadows for stealth action. Illuminate the blaster to lead the way during low-light missions. This breech-load blaster has an internal clip system that can hold up to 6 darts. Load the darts, prime, and pull the trigger to fire 1 dart. Ages: 8+

Riders can control the Nighthawk’s speed up to six and a half mph with the accelerator and brake pedals. Kids can maneuver around obstacles by leaning left and right. The Nighthawk is recommended for riders up to 110 lbs. With an included rear safety flag, you can easily keep an eye on riders as they have a blast racing for up to two hours on each battery charge. Simply plug in the included charger to the 12V7AH battery to re-power the ride-on. Ages: 6+

Blume collectible dolls come in flower pots that “sprout” when you add water to them. You get the pot, add a few drops of water, and — surprise! — the doll “blooms” before your eyes. The first glimpse you get is of some kind of fabulous hairdo; some of the dolls have hair that looks like waves, rainbows, ice cream, flowers, and crystals. Then, kids can open the pot, which transforms into a playset for the dolls and accessories. 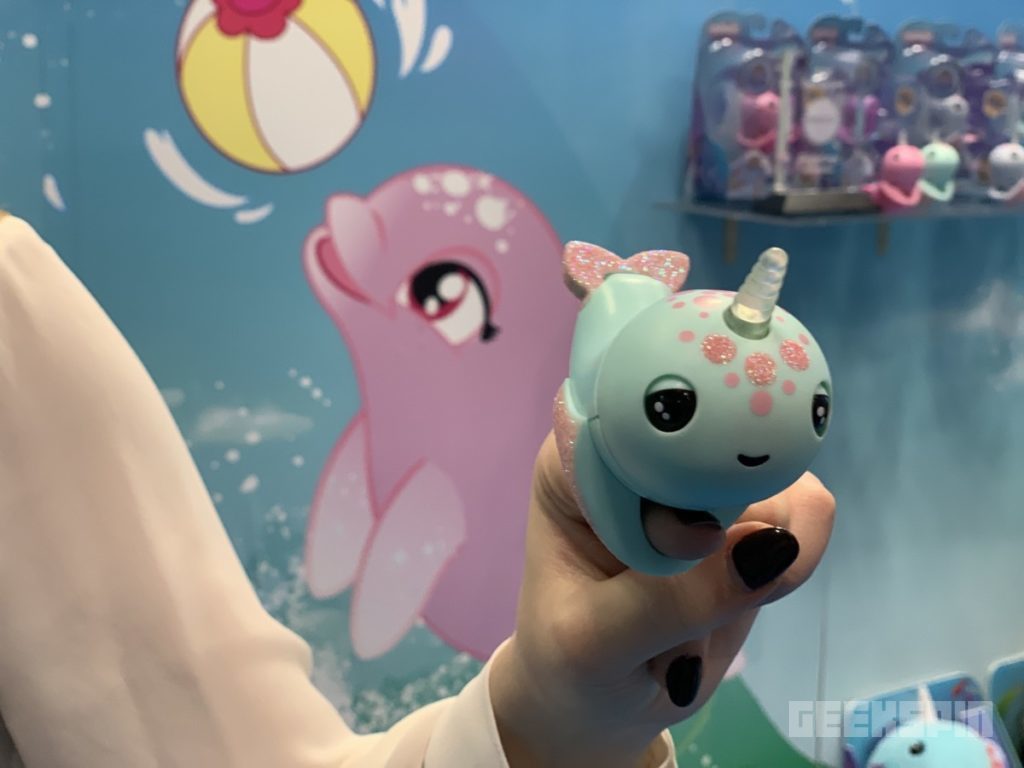 Not quite whales and not quite unicorns, these interactive, finger perched WowWee Fingerlings Narwhals respond to noise, motion, and touch. Their “mood horn” illuminates in different colors depending on playmates’ interaction. Likewise, their tails flap and eyes blink to tell you how they’re feeling. Best of all, the Narwhals offer Magical Kisses that grow bigger and louder the longer you press their faces to your cheek. 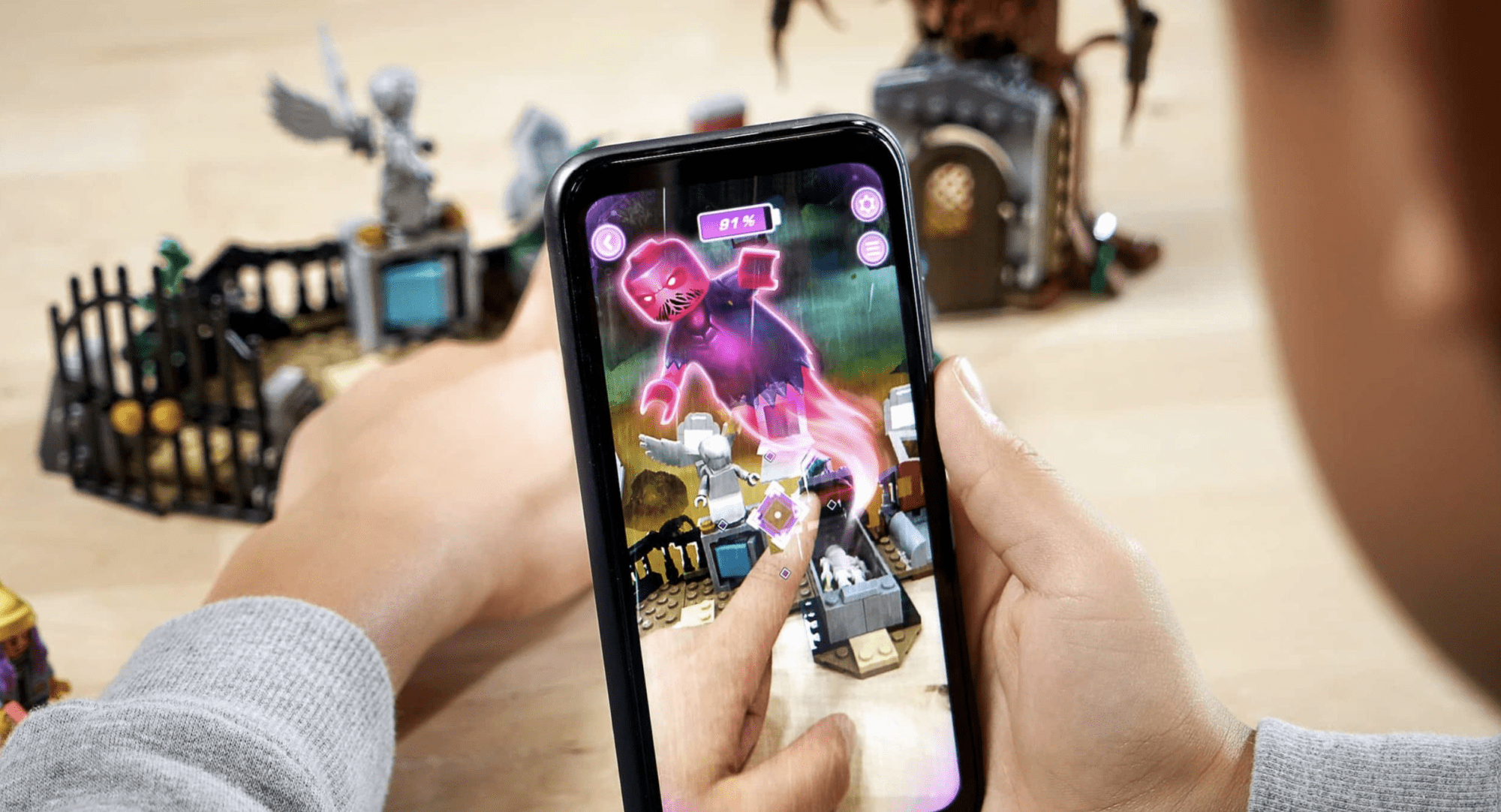 Lego is launching a new line called Lego Hidden Side, which is the company’s first build set designed specifically for an augmented reality experience. The playsets revolve around a haunted town, so the player has to help two kids fight ghosts and zombies through different sets from a small Lab (174 pieces, $19) to a giant School (1,474 pieces, $129). The AR app is designed for children to play with one hand on the phone, blasting away ghosts and hitting button prompts, while the other hand is meant to manipulate the set to solve puzzles that the phone will react to in real time. There are five virtual keys in each set that unlock a unique boss that your child fights once they collect them all. The Hidden Side sets will start at $19.99 and launch sometime in the summer. 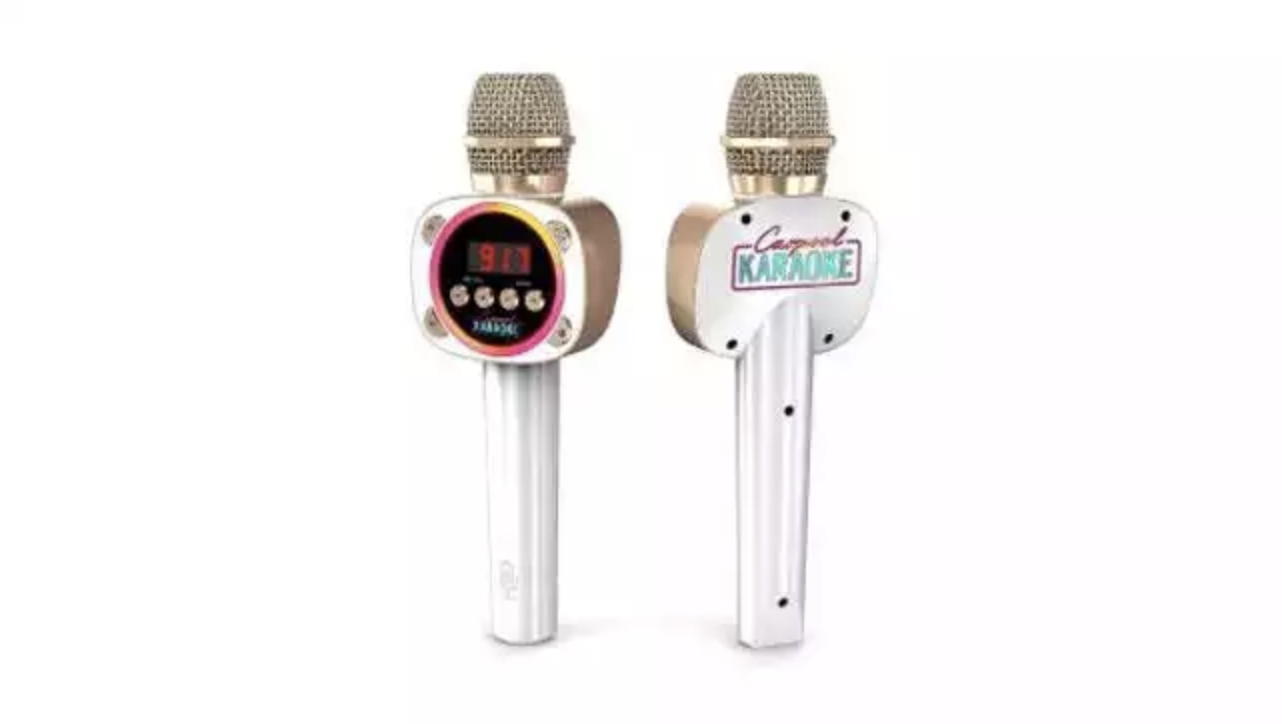 This namesake Carpool Karaoke Mic wireless microphone from the Singing Machine Company aims to recreate the experience. The shiny gold cordless mic uses Bluetooth to pick up music from your smartphone — whether it’s from YouTube, Spotify or Singing Machine’s own $15 a month service. Simultaneously, an onboard FM transmitter outputs the blend of music and your overlayed live vocal so the combination plays through the car stereo system. “You have to tune around to find it, but there’s always an open FM frequency in every town,” noted Singing Machine product manager Chris Pacheco. Or, for clearest quality, run a cable (supplied) from the microphone to the car stereo’s audio input jack. This party maker runs 4-5 hours on a rechargeable battery (or indefinitely if plugged into a car power outlet). One note, the CK the Mic doesn’t come equipped with auto-tune to sweeten up sour notes like the bigger Singing Machines can. 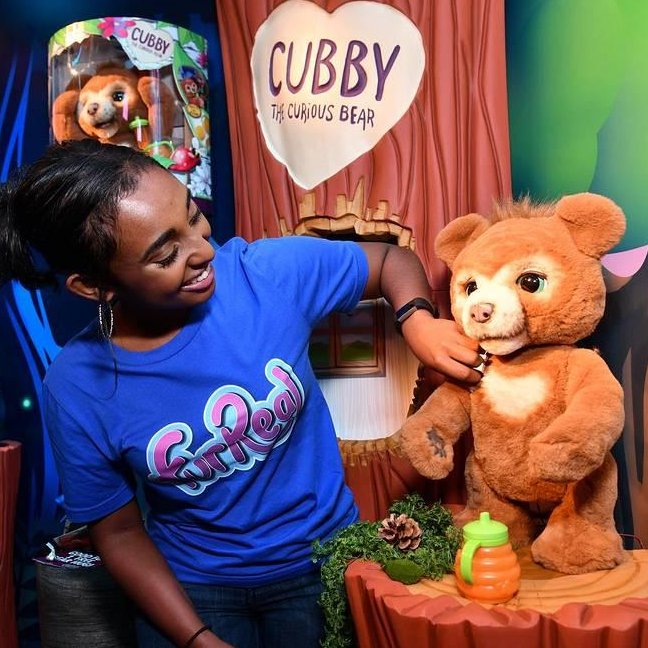 Hasbro’s FurReal Friends line just gets cuter and cuter. This time around, the company’s launching an adorable bear called Cubby, the Curious Bear. You can feed, pet and brush this interactive cutie, it even gives hugs and plays peekaboo. It also responds with gentle coos when you talk to it. And when it’s time for bed, switch Cubby into Nightime mode, it makes yawn sounds as it closes its eyes and plays 1 of 4 lullabies.
Available: Summer 2019 for $99.99 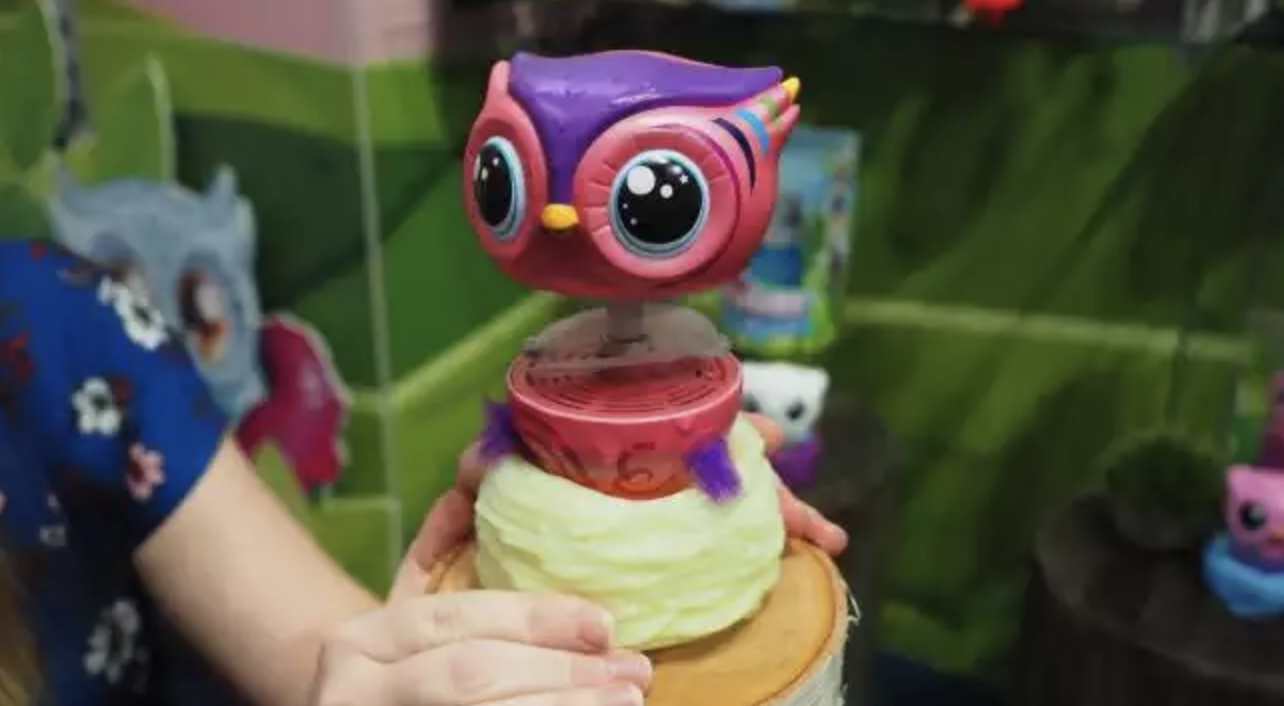 While they’re not as prevalent as dog or cat videos, owl vignettes are pretty cute. That might be where SpinMaster got the idea for the adorable Owleez line of toys. The mechanical owlettes are interactive and in need of your tender, loving care. Thanks to motion sensors, you can tickle, feed, pet or even burp them. It’s LED eyes will change color based on their emotions. With enough love and care, you can start teaching them to fly. When they’re ready, you just put them back on their nest and they’ll take flight, exposing a pair of propellers to keep them airborne. SpinMaster estimates that you’ll get about 15 minutes of flight out of your Owleez. After that, it’ll take 30 minutes in its nest to fully recharge. 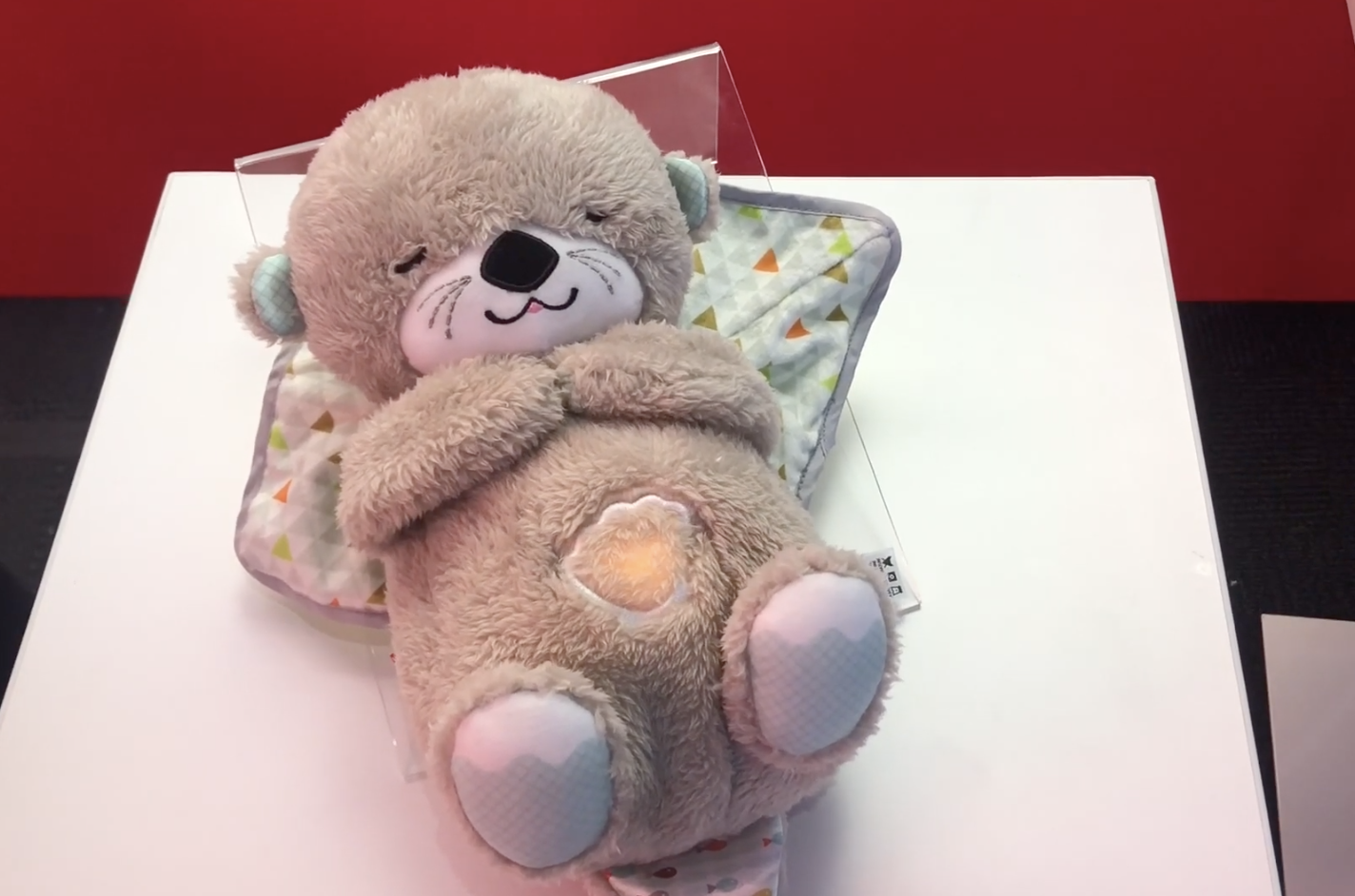 Parents of newborns will tell you, one of the first things you want to do is get your baby on a regular sleep schedule. But until then, expect long nights and early morning of feedings, diaper changings and crankiness. Fisher-Price is hoping to help with its Soothe n’ Snuggle Otter.  This adorable little plushie will help baby (and parents) to sleep. Simply press the button on the toys stomach and it will replicate the gentle rise and fall of a parent’s breathing. Place your baby on top and pretty soon you’ll have a peacefully resting baby and a super cute photo of your kid with a stuffed otter. It’s a win-win. 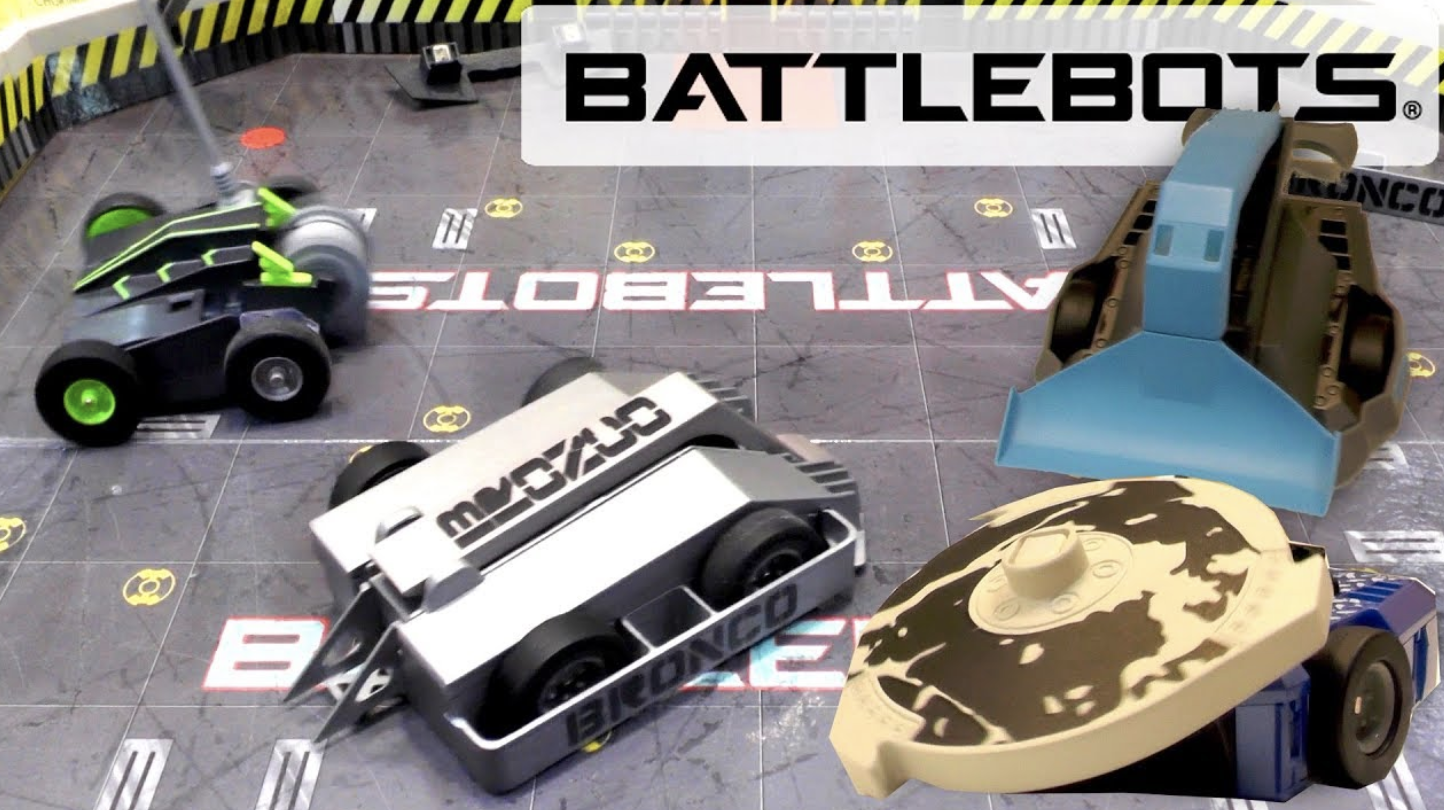 15. Hexbug Build Your Own BattlebotsHexbug has had a strong line of radio-controlled battling robots for the US Battlebots show for a long time. This year, however, they also introduce a build your own battle robot toy set.

This is essentially Robot Wars. Each set comes with a base drive unit and a range of different weapons. The more sets you have the greater the number of combinations. What’s particularly clever about engineering is that they are designed to fall apart as they do in the show. Happily, though, you can just snap them back together again after each battle.

I’ll keep updating this with links to buy as these continue to roll out!