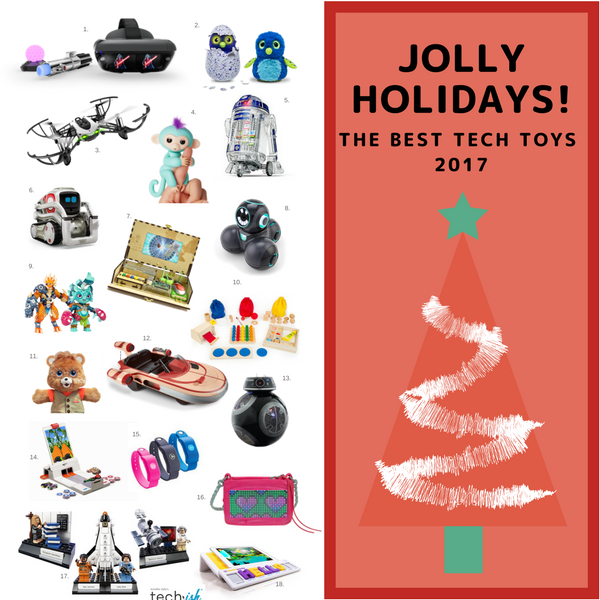 Here are the gadget-y toys in all price ranges that I’ve had a blast playing with this past year. Now I hope that your kids (and you) will have a great time with them too! (FYI: Many of these prices are fluctuating during the holidays – many of the prices listed below could change.)

1. Star Wars: Jedi Challenges: Lenovo and Disney partnered on this timely Star Wars tech that lets kids (and their moms!) fight realistic light-saber duels without consoles or computers. I can’t get enough of this game. It takes less than five minutes to set up and before you know it, you’re perfecting your Jedi skills against the most menacing villains the dark side has to offer — right in your own living room. $199, Buy

2. Hatchimals Surprise are back and more popular than ever. These are the fuzzy interactive toys that “hatch” out of eggs. New this year, twins – that may or may not be identical (it’s a surprise!) and a new Golden Lynx, and even mini-me’s. $59.99 Buy

3. Parrot Mambo FPV is the first “almost fail-proof” little drone I’ve flown. Press a button on the controller and it takes off. Use joystick-like controls to zip it around. Don the VR headset and it takes you airborne, giving you a drones-eye view of everything it sees through its 720p HD camera. $139.99, Buy

4. Fingerlings are a bunch of interactive pets that latch on to your finger, respond to sound, motion and touch by blinking their eyes, moving their head, and talking in cute baby-animal talk. $14.99 Buy

5. Little Bits R2D2 is a complete Droid kit that comes with everything kids need to create and control their own Artoo – right down to the battery – plus stickers and extra accessories. No grown-ups necessary: Kids can put together easily with step-by-step, in-app instructions, then challenge themselves to level-up their inventor skills by building new custom Droids. $99.95 Buy

6. Anki Cozmo is a little robot with a big personality. Like a character in a Pixar movie, he is quirky, cheeky, and completely engaging. Artificial intelligence lets Cozmo express hundreds of emotions from angry to amused. He recognizes faces, names, and personalities. I love this little guy. $149.99 Buy

7. Piper DIY Computer is a Minecraft-based simple, yet smart, built-it yourself computer kit that teaches kids ages 7+  about coding and engineering beyond the screen. It also encourages them to tap into their own imagination, which fosters confidence and creativity. $299.99 Buy

8. Wonder Workshop Cue is  a cheeky little comedian hiding inside a sensor-packed round robot body – great for ages 11+. Pre-teens can engage in witty banter, chat, create, and code at the skill level that’s right for them. $179.99, Buy

10. Monti Kids is a fantastic first-toy subscription box for wee ones. It offers Montessorial-backed educational toys for newborns to 2.5 year olds. Kids get a new shipment of developmentally appropriate toys every three months and parents get a short video every single week that guides them through their child’s development. Starts at $297 Buy

13. Sphero BB-9E is a new nemesis for the past hit – the Sphero BB8. Control BB-9E with your smart device and see it roll just like on screen. Explore holographic environments like the First Order’s Supremacy Mega Star Destroyer and immerse yourself in the Star Wars galaxy. This is not the Droid you’re looking for, it’s the Droid that’s looking for you. $119, Buy

14. Osmo MindRacers: this collaboration between Osmo and Mattel is a ton of fun. It’s a new iPad-based game that lets kids race the iconic Hot Wheels toy cars in an augmented reality world. The package includes the racetrack, and a fleet of six cars.  $59.99 Buy

15. SoundMoovz wristbands let kids create music and sound effects by moving.  Strap on the band, download the app, and move. That’s all it takes to cue up the sounds — everything from robots to action sound effects to instrumentals. You might want to include some headphones to go with this. Just a thought. $49.99, Buy

16. Project Mc2 Smart Pixel Purse is a nod to the the Netflix series Project Mc2. It’s a great show emphasizing S.T.E.A.M. for young girls and features this purse on the show. Girls ages 6+ can use a free app to customize it – kind of like a Lite Brite for the next generation. $49.89 Buy

18. Square Panda phonics and reading games for kids ages 2-8. It works with any iOS or Android tablet you already have and a series of free apps and plastic letters that teach early language development in a hands-on  way. $99.95, Buy

There are a few more that I love, but this is all that fit on the graphic. Keep coming back here for more information – and be sure to reach out via our social media if you have any questions for me!

Happy and Merry Everything!

**Techish is a participant in the Amazon Services LLC Associates Program as noted in the ABOUT section of this site.