The scariest part of Halloween these days might just be how much we’re all spending on it. American’s are shelling out more than nine billion dollars for all the costumes, candy, decorations and parties this year, according to the National Retail Federation. If the high cost of it all gives you the creeps, these apps deliver big fun for free.

My new favorite app for not too gross and slightly sexy Halloween selfies is the free Photo Lab app (iOS and Android). I’ve been playing around with it all morning and wow, it’s packed with photo fun generating – awesomeness. It has more than 800 awesome effects for your photos, and it’s super simple to use. There’s No need for adjusting: just choose an effect or a frame, then select a photo from Camera Roll (or take a new photo with your phone camera) and ta-da!..you get a unique photo montage or collage! The app also has a built-in photo editor with every basic tool you may need: crop, rotate, adjust colors, lighting and sharpness, and even touch-up. Here are three photos that I just made in the last five minutes. 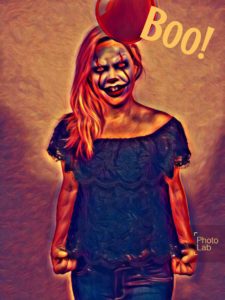 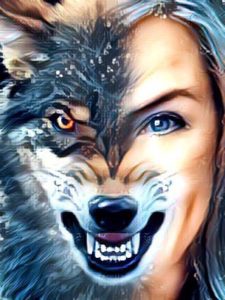 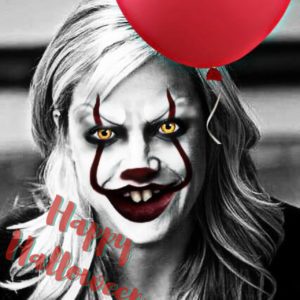 The Turned app creates a “realistic” zombie drama with super-stepped-up special effects and interactive social media storytelling. When you open the app, choose between zombie or survivor, or click on the map to view the contagion as it spreads around the world. Once you pick your side, just layer-in the special effects, and then snap a photo or video. Turned actually captures and analyzes nuanced facial expressions so that the effects move with your expressions. Imagine—bleeding eyes blink and slashed lips speak. You can share your “gorror-story” on your own social media or join the uprising by posting to a public gallery, where you can watch the outbreak unfold in real time. It’s disgustingly awesome. Free on iOS.

If you want to look more pretty than putrid in your spooky selfies try Vampify or the glamorous Goth or Veil effects from Perfect365. For more cute that blood-curdling, you can’t go wrong with creating a Charlie Brown themed selfie via Peanutize Me.

The Camera Hoax app is another genius way to get in the fright-night spirit. It lets you choose an image from a spooktacular array of ghosts, ghouls, UFOs, or even Bigfoot, and then add it to a photo on your phone. It’s not that easy to figure out at first—it takes a bit of time to find the “open from gallery” option in the toolbar—but the results are worth it. Bone up on the advanced settings to resize, blur, and color your paranormal photobombers for maximum effect. Free on iOS.

Ghost Lens lets you supernatural-size yourself by merging two similar photos together. One photo is normal but the other shows up as an eerie, ethereal spirit. If you use a little imagination in your poses, you can make it look like the “ghost you” is is stepping, creeping, or rising out of the “normal you.” Free on iOS.

A few similar apps have also materialized on Android, including Ghost Photo Maker, which produces merged spirit photos similar to the ones you’ll get from Ghost Lens. Ghost Photo Stickers works a lot like Camera Hoax, but with a larger focus on spooky, ghost-like images rather than monsters or myths.

To up the ante with scary sounds, take a look at the Free Halloween Sounds Pro app, which adds a sneaky little trick to the same-ole press-n-play soundboard. Its Timer Trickeration mode let’s you choose from a selection of sounds, such as a blood-curdling scream or haunting hiss, set a silent timer, then hide your phone to scare the pants of a trick-or-treater (or your own mom). Free on iOS, with a $1 version on Android.

Doctored photos and fake sound effects are fun for Halloween hijinks, but what about people looking for “real” ghosts? Ghost Observer uses your smartphone camera to spot specters. Fire up the app, wait for it to “calibrate” to your location, then follow the blinking radar that appears to catch a glimpse of whatever spirit’s busy haunting your hallways. It’s all in good fun, but following a signal through your house while watching the screen, and then seeing a ghost emerge from your refrigerator door is actually sort of spooky. Especially if you dim the lights first. Free on iOS and Android.

Make your little hobgoblins the star of this Halloween with the StoryBots Halloween app. Snap photos of your kids and their friends then upload and arrange them on cartoony-cute ghost, werewolf, and funny Frankenstein bodies. Play the video and watch them flail around as the main characters of a few pre-animated skits. Adorbs. Free on iOS.

Nextdoor, the social network for your own neighborhood, is back again this Halloween with its “treat map” (as in “heat map,” har har har). The app lets neighbors mark if they’re giving out candy, where to find the best haunted houses, and which scary neighbor not to mess with—for reals. Free for iOS and Android.

When it comes to safety, your little pirate or princess may finally be old enough to head out alone, but that doesn’t mean you have to go cold-turkey on your hovering ways. The Track N Treat app lets keep a watchful eye, while staying out of their sight. Just make sure they don’t go out half-charged. The GPS can drain a smartphone battery long before the sugar-high wanes, so they might have to swing back by home for a battery-boost along the way. Free on iOS.