Ready to travel? I flew during a pandemic–here’s what I used to stay safe! 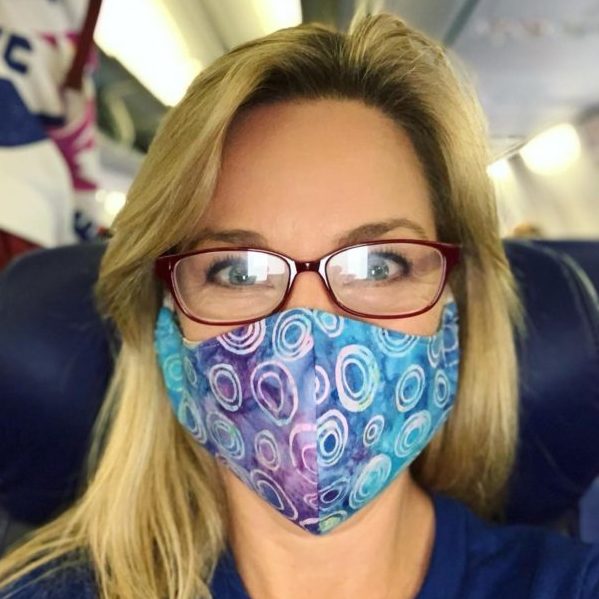 I fly around 10,000 miles a month for work. When COVID-19 grounded non-essential travel in mid-March, I did what I had to do: Hunkered down, followed shelter-in-place orders, and researched tools to help make it safe-ish to travel again. I also worried about work. As a freelancer, I wondered how many jobs I could turn down before feeling like I absolutely needed to get on a plane for work again.

The answer to that question came earlier this month. I didn’t venture more than 20-miles away from my home in Oakland, California for more than three months. Then, on June 11th, with a big project at stake, I stepped out of my house, into a mostly empty Oakland International Airport, and onto a two-thirds full Southwest Airlines flight to Chicago for a quick one-day out-and-back trip.

Here’s a look at the gadgets I used and what it was like overall. 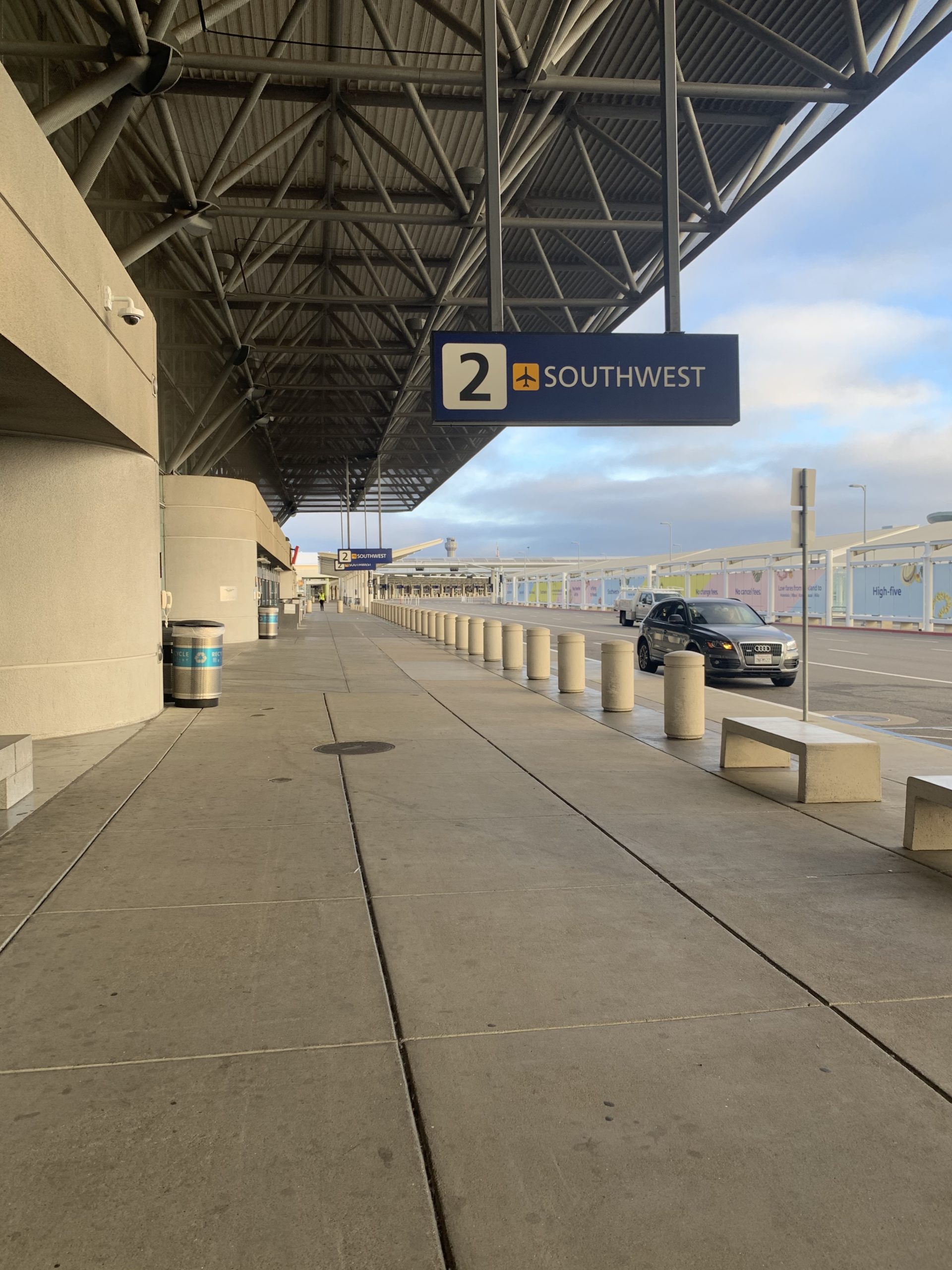 Even though air travel has been on a steady climb in recent weeks, I don’t remember airports being so empty since the days right after 9/11. There were no other cars on the curb when my husband dropped me off, no lines through security checkpoints, shops and restaurants were closed, entire areas were roped off and dark, and the process of flying does not look or feel normal.

“So much is uncertain right now,” says Henry Harteveldt, founder of San Francisco travel analysis firm, Atmosphere Research Group. Harteveldt normally flies once a week, but hasn’t been back on a plane since early March. “I’m not holding back from flying,” he added. “I just have no reason to take a trip right now for work or pleasure. Overall, airlines and airports are doing a much better job of keeping clean.”

Most notably, Harteveldt says airlines such as Southwest and Alaska, among others, are leaving middle seats empty, boarding in smaller groups to help people maintain a bit of social distance, and requiring masks in their waiting areas and onboard the planes. 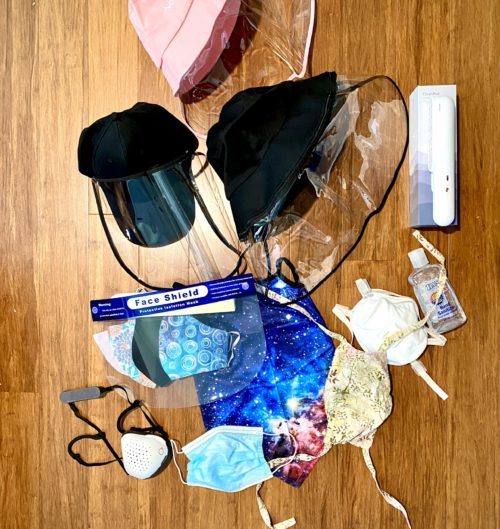 Masks are mandatory for most flights and in most airports for the time being. If you don’t bring your own, most airlines offer you one. There are varying degrees of enforcement of this rule, and that’s been a big problem for both airline employees and passengers alike. A handful of domestic airlines have removed and banned passengers who refuse to wear a mask, while others have ignored it. But I didn’t see anyone without a mask or shield covering their mouth and nose the entire duration of my recent flights.

I wore my glasses the entire flight and saw a lot of other people with face shields too, which helps decrease the risk of catching the virus through your eyes.

“Even leaving middle seats empty means that you’re sitting only 17 to 18 inches away from someone else,” Harteveldt noted. “That means the more precaution you take, the better for everyone.” 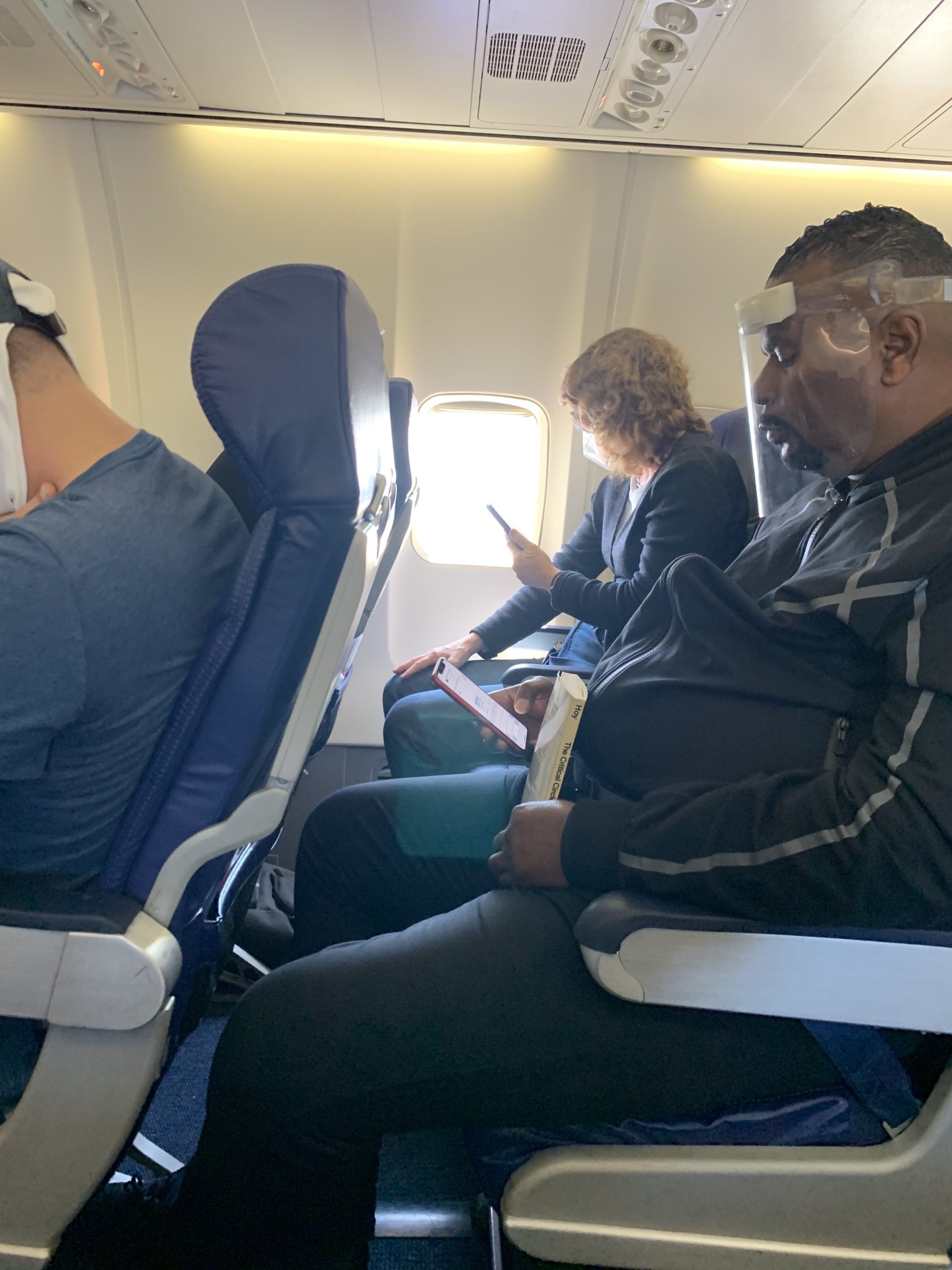 I’ve tested and reviewed dozens of masks, with varying levels of protection, from the basic cloth buff, to an actual N95 surgical mask that healthcare professionals need to wear. Since it’s still best to reserve the N95’s for medical and frontline workers, the mask I used for the trip to Chicago is a double-layer cloth DIY version that my mom made, with elastic that goes behind my ears. After about three hours, my ears and head started to ache a bit from the pressure of the elastic. When that happened, I switched over to a different mom-made DIY cloth option with ties versus elastic.

I’ve also tried out the high-tech O2 Curve ($70) mask, which I don’t like because it doesn’t fit my face well and isn’t as comfortable as others, the LOLONG Face Bandana ($16) which is really comfortable and kind of cool looking, but thin, and the basic surgical style masks you can buy in bulk on Amazon for around $30 for a pack of 50 (the elastic bands break easily).

One note here, I have asthma and have not had any trouble, whatsoever, breathing while wearing a buff, cloth, or surgical-style mask. In fact, I’ve had to wear them many times before running in dusty or smoky areas, both of which trigger my asthma. The worst thing that’s happened to me is that my lips have gotten chapped wearing one off-and-on while running a 50K recently on trails, where there wasn’t enough room to maintain social distance. (The simple fix for that was Vaseline and a mask that doesn’t touch my lips every time I inhale.)

I didn’t have an anti-fog face shield for my flight to Chicago, but a lot of other people did. I ordered two inexpensive styles from Amazon that I, and my family, will wear on a flight to my hometown in Alaska later this summer. 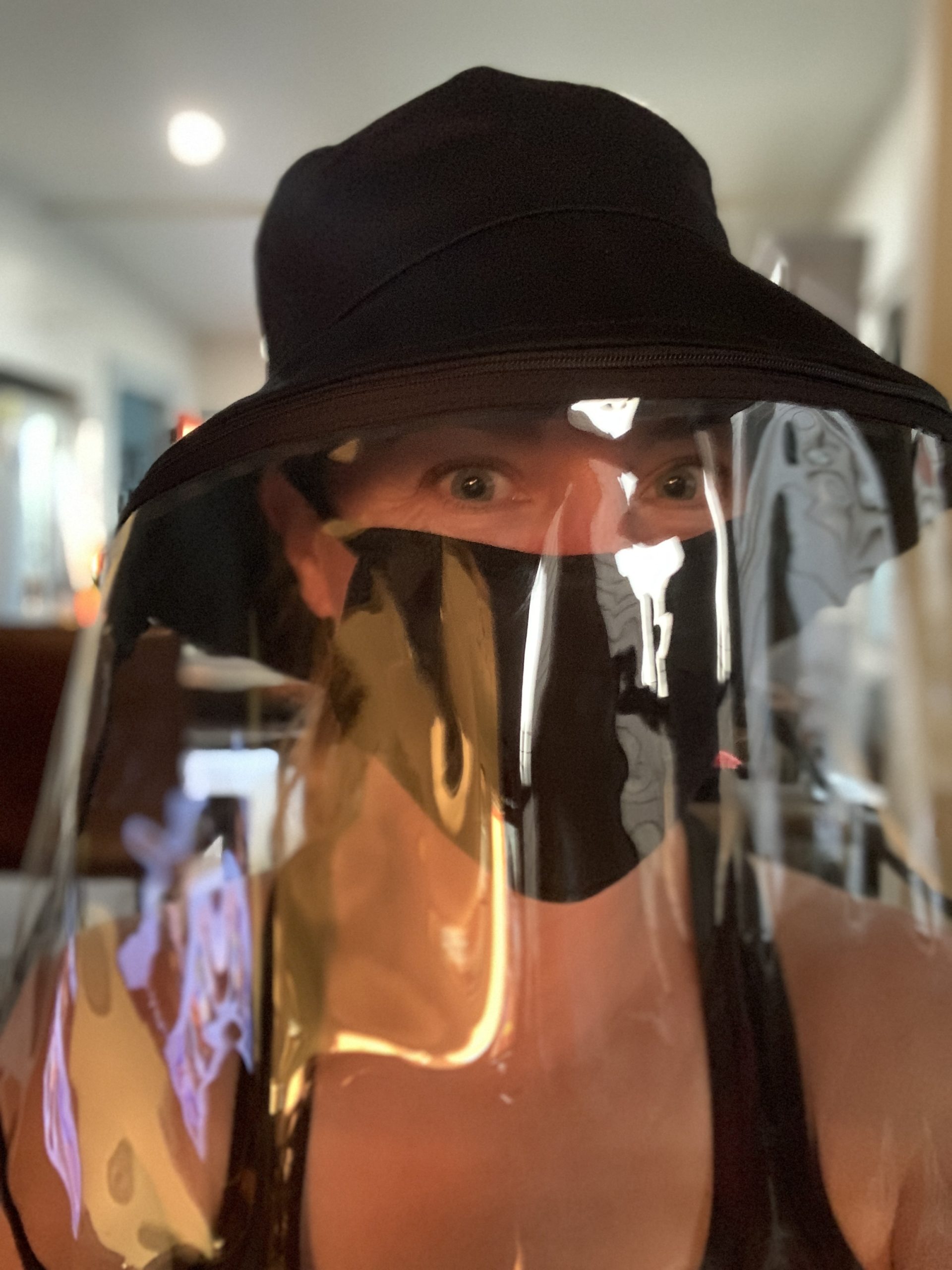 I also tried several bucket and baseball-style hats ($16-$20) with plastic face shields you can button or zip on. I felt pretty ridiculous in them, and they all fogged up too much to read through, so I’m going the face shield route instead. If I had to sit next to a stranger, or anyone not wearing a mask, I would wear this in a heartbeat. I also was too self-conscious to wear my Under the Weather ($100) walking pod, though this too is something I would gladly use in high-risk situations!

HOW’S THE AIR UP THERE?

Air quality on planes is better than most people think, according to United CEO Scott Kirby, who during a recent call with investors said, “What makes an airplane safe is HEPA air filters recirculating the air every two to three minutes.” Harteveldt also added that the air in the cabin is “probably cleaner than in the terminal and even in your own home.”

Expert advice so far is that the window seat might be your best choice because it puts you further from the aisle and might reduce the number of people sitting around you. It’s also good to open the air vent overhead so that filtered air can help push any non-filtered air away.

In addition, most airlines now have new cleaning procedures for airplanes, which you can read about on their websites. I highly recommend doing your homework, choosing airlines that aren’t filling every seat, and one that details how they’re keeping the planes more sanitized.

For Southwest, they list using “both an electrostatic disinfectant and an anti-microbial spray on every surface of the aircraft, killing viruses on contact and forming an anti-microbial coating or shield for 30 days,” among many other new deep-cleaning protocols. 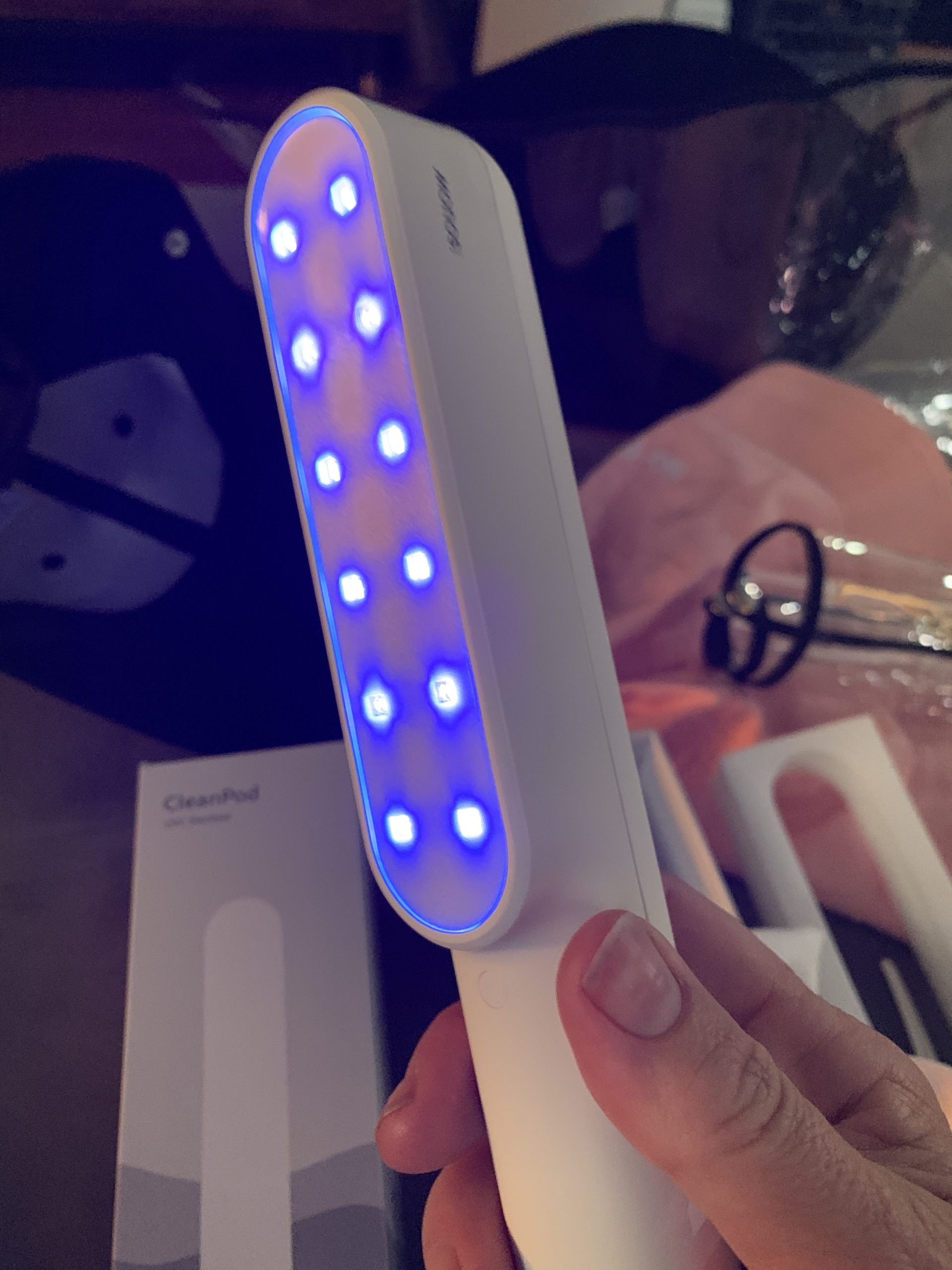 I don’t go anywhere without hand sanitizer anymore, and a small pack of disinfectant wipes, which I find easier (and more eco friendly) than carrying several sets of disposable gloves everywhere I go. Several people have asked if the planes seemed clean, and my answer is yes, absolutely they did. Still, I either wiped-down or “wanded” everything I touched with the hairbrush-sized, cordless, handheld UVC sterilizer called the Monos CleanPod ($90).

As I wrote recently in my top gadgets for the summer column, the way it works is super simple: Charge it up, then pack it in a backpack, or purse, and you’re good to go. When you need to sterilize something, press a button, wave it over any surface for 30-seconds and it claims to wipe-out viruses, bacteria, and all kinds of nasty germs. According to the National Academies of Science, Engineering, and Medicine, there’s a good chance it works as advertised, because “UV light has been shown to destroy other coronaviruses.” But UV light damages human skin, so you can’t use it on your hands, face, or any other part of your body!

Many airlines have suspended food and drink service for now, so pack your own snacks or meals, and a refillable water bottle. On my Southwest flights they gave out cans of water with a straw and small bags of Chex snacks, but with restaurants at the airports closed down too, it’s best to fend for yourself. The main retail stores, where you buy everything from snacks to magazines are still open, but meal options are limited. (Yes, you may remove your mask to eat or drink.)

Download your airline’s app so you can have a mobile boarding pass rather than a printed one. That’s the easiest way to show it to TSA and airline employees when you get on the plane. If you do get a printed ticket, TSA has you put it on the scanner yourself to limit contact, but electronic tickets are the easiest option overall. Also, be prepared to wipe down your driver’s license after you hand it to security too. Even though TSA workers wear gloves, they don’t change them between passengers, and even if this is germaphobe overkill, I’m happy to do it.

Several planes also removed their touch-screens for in-flight entertainment, so your options for watching something on your flight might come down to what you have on your smartphone, tablet, or laptop. Some airlines require you to use their apps to stream video onboard unless you already have something downloaded on your device ahead of time.

The other gadget I reviewed for this trip is a little alloy keychain tool to help open doors, push elevator buttons, and turn on faucets. I’ve seen several versions of these, but I opted for the Hengbeng “no touch portable stick,” (five for $18) and it worked just fine. It took some practice at home to use it to open doors, and even though it says it’s “self-cleaning,” I wipe it down before I touch it with my bare hands.

The other big thing I noticed was how quiet and serious everyone was on board the plane. I didn’t hear the normal chatter of strangers talking about their trips, or really any laughter at all. Someone did cough a few times and I swear you could feel everyone tense up and hold their breath for the next few moments.

My trip was a quick out-and-back journey for work. I didn’t spend the night, and barely even left the airport. I also took off all the clothes I wore on the plane just inside my front door, and put them straight into the washing machine, followed by a long, hot shower. Then, I was really careful over the next 14-days, making sure not to see anyone without a mask or social distance, except for my immediate family, who have also been extra careful.

Since it’s been more than two weeks, and I just received a negative COVID-19 test result, I would say the trip was a success.