HOW TO: Sell your old phone for the most money 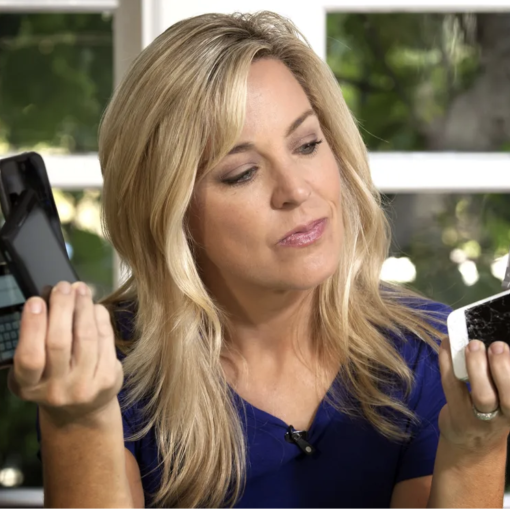 Remember when your cellphone was brand new and you wanted to show it to everyone? That was a good day! Exciting! Thrilling! And now, however long later this is, you are hankering for an upgrade.

The new phones do all sorts of amazing things yours can’t. They charge wirelessly, fold in half, sport super-fast processors, can survive a dunking, and have a camera that’s to die for.

Resisting the urge to upgrade our phones is – for many a human living in the year 2020 – a near-constant battle with lust-worthy temptation. Or, as I like to think of it, the never-ending struggle to “keep up with the phone-ses.”

Smartphones are now stupidly central to our existence, too. We spend, on average, five hours a day using them. Some of us spend much more. The struggle is real.

If you have resisted long enough and are ready to take the plunge, your service provider might offer a discount on your next phone – or your monthly bill – if you trade your old phone in when you buy a new one.

But that might not be the best way to leverage the value of that phone and help offset the cost of a new one. There very well might be hungrier buyers out there, willing to give you cash or gift cards for that sweet piece of tech.

Shop that thing around

You can trade an old phone in for cash at so many places these days that taking the low-ball offer that your carrier made you – or whatever merchant you’ve bonded with – is like throwing cash on a campfire. Chances are, you’re making this deal online anyway, given the current state of the world, so comparison shopping is a matter of a few simple clicks.

For example, AT&T offered $205 for an iPhone X (64GB), Gazelle offered $216, and Target quoted me $196. Those are small differences, sure, but unless you are loyal to a particular brand, it’s no more difficult to ship a phone to Gazelle than to Target.

The differences are even bigger when your phone is older or less popular.

When the phone I presented for trade-in was a 2-year-old Samsung Galaxy Note 8, AT&T considered it worthless, offering me nothing. Target offered $76, Gazelle offered $141 for a phone locked to AT&T, $142 for a Verizon phone, and $152 if the device is unlocked. That’s a difference of $150. Worth a few mouse clicks now, right?

So many buyers, so many phones

My quick online bidding war played out across the three merchants I chose at random. But the list of companies that will pay something for old tech is so long I can’t even list them all here. People will sell something like 1.5 billion cellphones worldwide in 2020. Everyone uses one. Everyone always wants a new one. And they are expensive. Suffice it to say, the market for used phones is hopping.

When Gazelle pioneered the idea in 2007, trading a used cellphone, tablet, or other technology in for cash was a new idea. Well, now it’s 2020. You can easily trade your phone in at Target, Costco, Walmart, or Amazon to name just a few. At each, the online process is similar. Answer some questions, get a quote, ship your phone, and receive a gift card from the merchant.

You can also trade that phone in at your cellphone carrier where, usually, you’ll get a discount – instead of a gift card – on the next phone you buy. You’d think trading in this way would be the best deal, right? After all, your service provider is making money on the service plan you’ll use with that phone and it’s selling you something expensive at a profit – not giving you cash. Not so. According to Flipsy.com, offers from other merchants are typically 30%higher than the one you’ll get from your carrier.

Then there’s the Gazelle competitors – uSell, Itsworthmore.com, Decluttr, and many others – that buy your phones and tech for actual cash. These sites often make the best offers, too. At least they did when I was selling that Note 8. (uSell offered me $120; Decluttr $129; Gazelle $141.)

But even among these third-party phone buyers, the offers vary wildly. “Some buyback stores are brand-focused and invest in name recognition,” explains Brian Morris of Flipsy.com. “They tend to have lower offers. Others are price-focused. They invest less in marketing, so they tend to offer more for used phones.”

So many options! How do you choose? If you have no brand loyalty on this and don’t feel like spending your own time doing the comparison shopping, Flipsy.com or SellCell.com are great places to get a quick idea of who’s buying and what they are likely to offer for your phone. These sites don’t buy or sell phones. They search merchants that do and return a list of who’s offering what for your particular phone.

If you go this route, Flipsy’s Morris suggests you first get any free or low-cost repairs completed through your phone’s insurance plan – if you have one. “The better condition it’s in, the more money you’ll get,” he says. Also? Back up your data, clean your phone before you send it in, and return it to factory settings. “Dirty phones suggest they weren’t well cared for and could cost you,” he says. “Clean phones suggest they were taken care of. Physical appearance factors into condition.”

If you are willing to go it on your own and become the seller, you can probably get even more money for the tech you want to unload to fund your new phone. Just head to one of the many online person-to-person marketplaces to skip the middleman.

It’s more work, though. You have to create an online listing at eBay, Swappa, Amazon, Mercari, or a similar site. This means snapping some pictures, writing a description, and monitoring the sale. Then when it does sell, you have to ship the phone and deal with customers. Who knows, though? This could be the beginning of a selling obsession that will simultaneously declutter your home and pay for this new phone you want.

If you want to ride the constant wave of new technology but don’t want to spend $1,000 a year to do it, the real trick is to redefine what you mean by “new.” Sure, this year’s phone has something slick that last year’s phone did not. But money is money. You can tap into this used technology market, stay just a few steps behind the cutting edge, and save a lot of bread.

For example, if – after you sell your old phone – you go to Amazon, Gazelle, or Decluttr, say and shop for a phone, you can save quite a lot of money over the price your carrier offers on the very same phone. Your “new” phone may have lived a life in the hands of someone blessed with enough cash or credit to live closer to the cutting edge than you. But it will also be cleaned up, tested, and often guaranteed. If you’re willing to buy last year’s model, you can get a phone for a quarter or a third of what that phone would have cost if you purchased it brand new. It’s kind of like a car you drove off the lot and it instantly becomes worth so much less.

Remember, you’re earning some good citizen points while you do this, too. Buying a phone that someone else discarded keeps that tech out of the trash heap and landfill. This is, literally, recycling that pays!