It doesn’t matter if you have a still-shiny-new iPhone X or an ancient iPhone 5s — if you’re planning an upgrade to the latest and greatest as soon as Apple unveils them this week — you likely want to score the most money for it as humanly possible.
There are a ton of ways now to get cash for your old iPhone. The sooner you sell it before Apple announces new phones on September 12th, the more money you’ll make. You’ll also get about 30% more money on average going through a buy-back site such as Gazelle and Nextworth, than from a wireless carrier’s trade-in program. Those two sites specifically also let you lock in a sales price, then hang onto to your old phone for a few weeks until your new one arrives — so that you don’t have to use a backup phone in between. 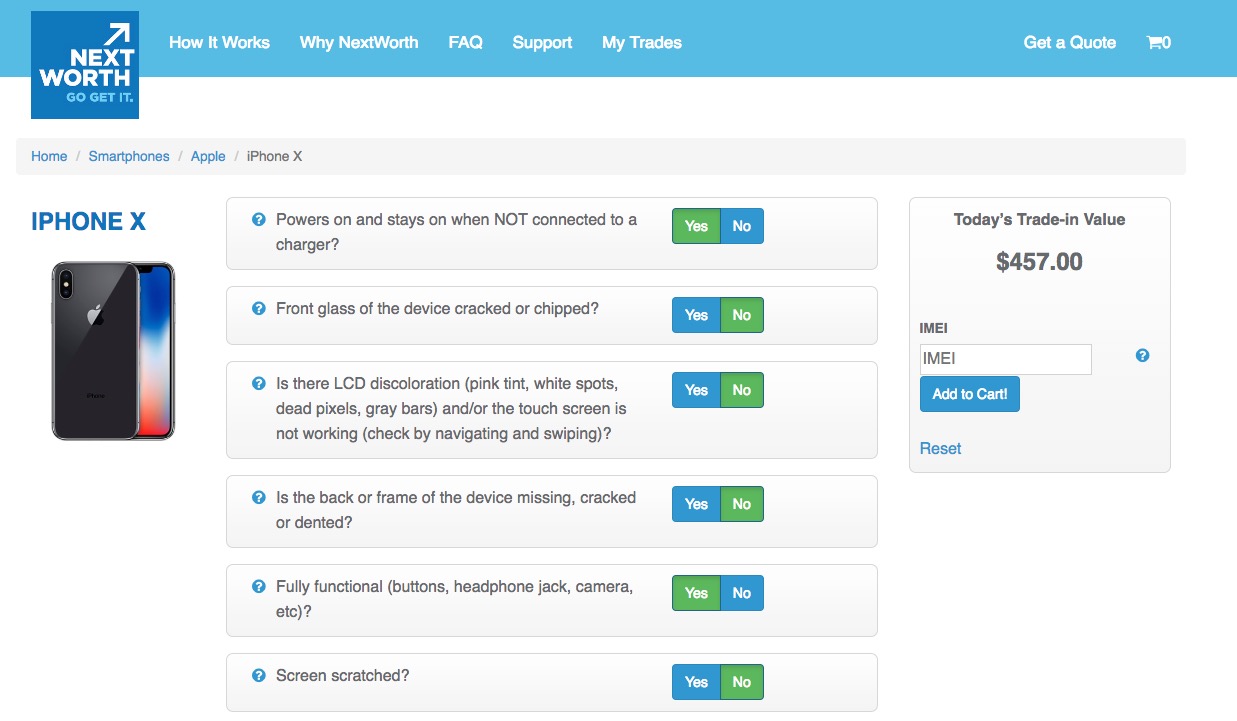 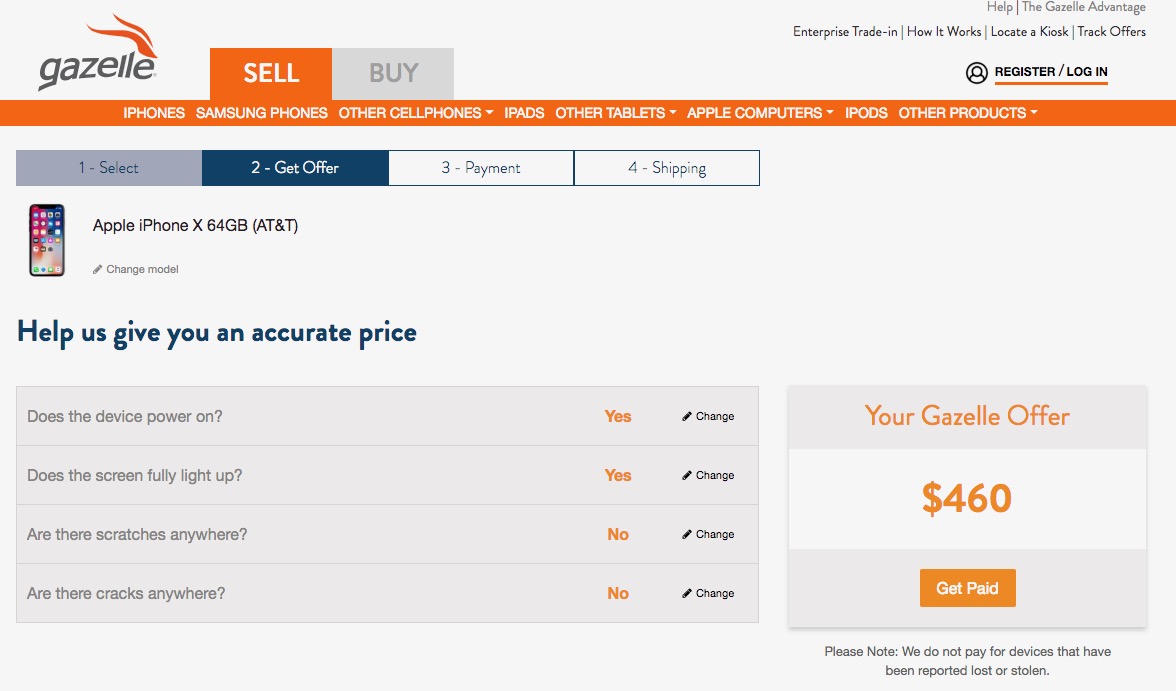 “One of the best ways to get the highest price is to take advantage of the price locks,” Brian Morris, spokesperson for the price-checking database Flipsy told me. “You can lock in a price now and wait up to 30-days before you have to send in your phone. And when you do a price lock, you’re not obligated to sell it, you’re just locking in that price if you do.”
You can even go the route of selling your old smartphone in person via Craigslist, Facebook, or an app like LetGo or OfferUp, but those options come with specific warnings how not to get scammed.
PRICES NOW
There are many reputable go-to’s now when it comes to offloading an old phone to make way for a new one. At each one, you’ll get asked a series of questions about the condition of your phone to determine its value.
Here are all of the services I’ve used first-hand, and where prices are at the moment for two different model phones:
iPhone X (Silver, AT&T, 64GB, Good Condition)
iPhone 8 (Silver, AT&T, 64GB, Good Condition) 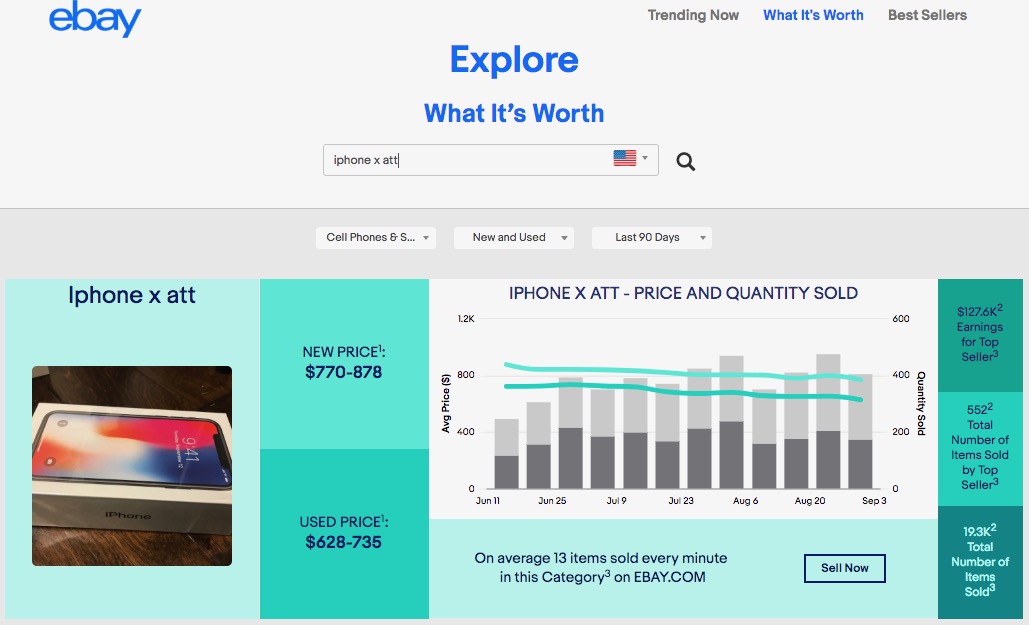 EBAY IS STILL KING
For the past couple of years now, eBay has been the best place to get top dollar for your used iPhone. With eBay, you’ll get plenty of eyes on your listing, and you have a great chance at snagging a reasonable price for it, but with a few caveats.
You’ll still have to deal with shipping it to the buyer, whereas some other sites send a pre-paid box or shipping label, you stick your phone in, and they do all the rest. Remember to subtract your estimated shipping cost from your sale price, so you know exactly how much you’ll end up with, and compare that amount with prices from elsewhere. Also, if you accept payment for your phone via PayPal, they’ll take a 2.9% cut of the final amount. That’s on top of eBay’s sale fee of up to 10% which you’ll be charged at the end of the month. It pays to calculate that beforehand as well.
eBay does offer a “Quick Sale”option for some iPhones, where you can settle for a middle-of-the-road price, and eBay does the actual selling for you, but to get the most cash you’ll need to list it, sell it, and handle the shipping on your end.
When you list your phone, it pays to be honest about the condition, and be sure to take high-quality photos of everything that’s included. That means your phone, any cords or headphones, the original box, and any manuals that came with it. Something as simple as a charging cable can have a significant impact on the overall sale price, so don’t leave them out!
WHEN TO SELL? NOW!
Timing is everything when you’re selling a used gadget, and that’s doubly true for the iPhone. Prices traditionally fall off a cliff as soon as Apple’s next-generation smartphone hits shelves. “The sooner you sell, the better, because prices can actually drop 15-40 percent surrounding a flagship launch,” Morris said.
Apple is expected to announce its newest phone lineup on September 12th, and many of the sales site’s price lock-in lasts until October 19th, giving you enough time to get the new smartphone and then send your old one in without worry about prices changing.
The good news this year is that last year’s launch of the iPhone X was pretty messy. It was in short supply for a long time,which means some iPhone shoppers might have settled for the iPhone 8 or even just kept their old phone for another year. If you have an iPhone X, there’s still demand on eBay and elsewhere, even after the newest iPhones start shipping, so waiting and selling later might have its advantages too.
Don’t expect store trade-in prices to remain steady after the newest iPhones start rolling out either. Stores like Best Buy, GameStop, and others have less incentive to keep rates stable after they start accepting the newer models for trade-ins, so prices for older phones usually begin dipping very soon after a new model hits shelves.
DON’T GET SCAMMED!
While it’s true you might be able to make the most money overall selling an older phone person-to-person, authorities are once again warning people to be careful. For the past few years, there’s been a rash of iPhone related robberies while meeting a potential buyer, and even a string of cases where people used fake $100 bills to pay for the phones.
If you find a buyer through Craigslist, Facebook, eBay or an app like OfferUp or LetGo, be sure to check the buyers’ social media profiles to make sure they are who they say are, read buyer ratings, and arrange to meet in a well-lit public place. Many local departments even have a video-monitored “safe zone” for Internet exchanges, and you can find locations using the Safe Deal Zone website.
WHAT ABOUT APPLE?
Following just about everyone else’s footsteps, Apple has its own trade-in program for gadgets, and the iPhone is no exception. Apple doesn’t take its latest models — they’re not accepting trade-ins for the iPhone X or iPhone 8 twins just yet — but if you have an iPhone 7, 7 Plus, or earlier phone, you can score up to $290 in Apple Store credit.
Apple’s prices are competitive but not always the best. Apple makes it simple to trade your phone in — they’ll send you prepaid packaging, so there’s no hassle — but if you absolutely want top dollar for an iPhone in good condition, you’d have better luck selling it yourself.
WIPE IT CLEAN!
Whatever you decide to do, be sure to back-up, save, and return your old phone to factory settings before you send it off.