Have you seen short animations on Facebook and wondered what they are? They are called GIFs and here is the lowdown:

Way back in the 80s, Steve Wilhite invented a graphics format that was better than what was at the time. Being a nerd (he coded for the now-defunct, then Internet startup Compuserve), he called it Graphics Interchange Format (GIF). This format is so old now that most software understands it, making it readily usable for all.

GIFs have lately enjoyed wild popularity because — among other things — it’s so much fun to send baby goat GIFs to your daughter/spouse/sister via text. (Seriously. It is.) The big controversy around GIFs is not over whether creating and sending them is an absolute giddy blast. (It is. Seriously.) It is over how to pronounce it. This is a debate that has raged on, absurdly, for 20 years. A while back, after the good people of the Internet had already debated this topic for too long, someone finally got up the guts to ask Wilhite himself, hoping that the topic could be — finally — put to bed.

“The Oxford English Dictionary accepts both pronunciations,” Wilhite told the New York Times. “They are wrong. It is a soft ‘G,’ pronounced ‘jif.’ End of story.”

Predictably, that didn’t settle anything. Everyone who grew up on Jiff peanut butter insists he is wrong and that is must be a hard G, as in “Gift.” Personally? I think we should let the man have his way. It’s his toy. We are just playing with it.

But what matters here and now is not how you say it but how you do it.

I have discovered, through experience, that some people are victims of GIFs. My daughter, for example, whom I pelt mercilessly via text with GIFs of baby goats, seems not to know how to reciprocate in kind. “Stop it!” She wails, in misspelled text. But I know she is simply refusing to ask me how I do it. Obviously, she would find it embarrassing to ask her mother how to use technology. (Even though I taught her to walk, eat with a fork, and read — among other things — and have been writing about it since before she was born.)

Fortunately, it is very easy to make and send them. So she will probably — eventually — figure it out on her own. 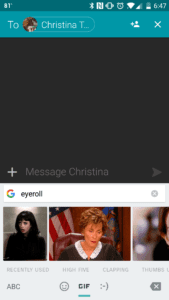 Open your texting app, start writing a message, and – with the on-screen keyboard in view – look for the emoticon icon down near the space bar. Tap on it and you will – probably – also see the word GIF next to the emoticon. Tap that and there they are, eyerolling, kittens, facepalms, sweet nothings, you name it. You can search for one that matches your response. Why type “Eyeroll,” for example, when you can send an image of Judge Judy rolling her eyes? Just choose one (that’s the hard part; they are hilarious) and hit send. No GIFs in your texting app? Try switching your default messaging app to Textra (on Android) or updating your iPhone’s operating system.

Just search for the image you are looking for in Google. A phrase like “Baby goat GIF” will net you more adorable hilarity than you can stand. Likely, you will find yourself at giphy.com or a similar GIF warehouse. Click on one you like. You will land at a page that lets you share that GIF over social media, download it, embed it in your Website (as I have done above), and more. Just follow the online directions.

There are lots of ways to make your own GIFs. The one I prefer, for it’s simplicity, is this: I take several photos of the same thing (A blast shot works very well.) You can take as few as 2 or as many as 50. Upload them all to Google Photos. From the main page of Google Photos, choose the “Create Animation” button. Select the pics you want to use. Click Create. Done! (I made the coastal one above in less than a minute.)

Welcome to the GIF revolution! Have fun out there.